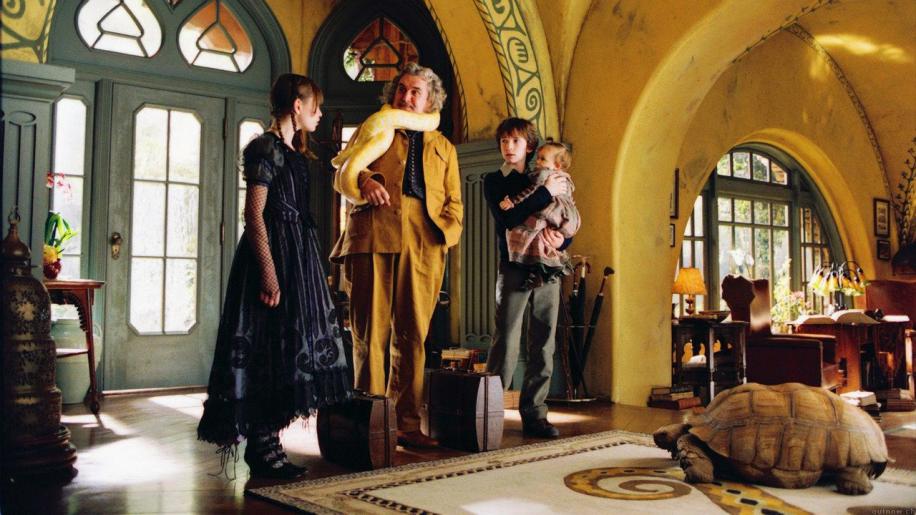 Based on the Lemony Snicket series of books (currently totalling 11 titles), A Series of Unfortunate Events tells the story of The Baudelaire children, Violet ( Emily Browning), Klaus (Liam Aiken) and their baby sister, Sunny. The children have been orphaned after their parents passed away in a mysterious fire which burnt down the Baudelaire home. They are sent to live with their 'closest relative', Count Olaf (Jim Carrey) who, unbeknownst to the children (at first), wants to kill them and inherit the family fortune. This leads to the 'Series of Unfortunate Events' as Count Olaf tries a variety of different ways to remove the children from the picture...permanently. The first thing that struck me when I began watching this movie was how much it looked and felt like a Tim Burton movie. The costumes, the cinematography, the sets and even the characters all have that trademark Burton weirdness. So it was with some surprise that I discovered that Mr Burton had nothing to do with this production. In fact, I would say the movie felt like a cross between Edward Scissorhands and Sleepy Hollow with a dash of The Addams Family thrown in for good measure. That said, it also had an originality to it that made it stand out as a uniquely stunning visual piece. Jim Carrey gives the kind of performance we have come to expect from him, OTT, overacted and hammy. But fortunately, the character(s) he portrays suit perfectly his enthusiastic delivery and overzealous acting methods in a way which has you believing that the roles where written specifically for him. This, of course, is not the case but it does show the creative genius of Carrey who has single-handedly brought the book's unfocused and unspecific characters to vivid, colourful life. You'd be forgiven for thinking that Carrey would overshadow the rest of the cast who would consequently just be 'along for the ride'. Thankfully, this is not the case. With a fine supporting cast including Billy Connolly, Meryl Streep and the voice of Jude Law who narrates the story as Lemony Snicket, Carrey is not allowed to steal the show and one of the strongest performances is from a relatively unknown Australian actress, Emily Browning who plays the part of Violet Baudelaire. This 16 year old star is destined for great things and reminds me of a young Christina Ricci. Maybe not in looks, but in her mature, seasoned performance in front of the camera. So we've established that the movie looks great with it's gloomy, brooding atmosphere. We know the actors give superb performances and Jim Carrey is as good (or bad) as he's ever been. So why the relatively low rating for this movie? Well, the problem may well lie in the characters themselves. The children seem nonplussed over the loss of their parents. For such devastating news, they just seem, well, a little depressed. Where at first the depression helps fuel the humour, before long it seems to stifle it. The first character to come along that seems to re-energize your enthusiasm is Uncle Monty (Billy Connolly) but soon you realise that the children are quite capable of fending for themselves which means you never really think they are in any danger and this leads to a feeling of “So What!” The movie is still watchable and in places, quite amusing but never is it side splittingly funny nor edge of the seat exciting which leaves you by the end wondering what the point of it all was. A case of style over substance applies here. Jim Carrey slips into his various roles superbly but you can't help thinking this movie was just a morsel of the main course and with a little more cooking, the best is still to come.