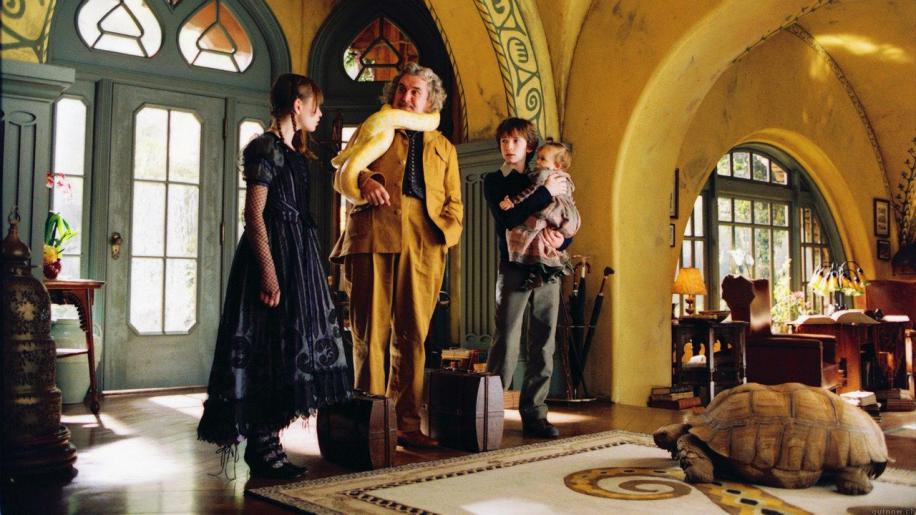 This movie can be summed up in one word with regards to it's atmosphere -Dark! The image is constantly filled with deep blacks, varying shades of greys and detail sapping shadows but the transfer is more than up to the challenge. The image looks stunning and handles the often difficult scenes beautifully. Shadow detail is retrieved with great success and nothing is lost from the very darkest parts of the image. Blacks play a huge part in this movie and they look so deep here that you cannot help but be impressed. Grain is very low and the image looks sharp and clean throughout. Edge enhancement is also very low whilst the picture looks natural yet detailed. You would imagine that with an image that consists so prominently of greys and blacks that the picture would look flat and lifeless but rarely has a film looked as impressive as this, and that includes those filled with colour. Maybe not the surround fest you might expect, but still an impressive, albeit subtle blend of voices, ambience, surround use and panning. The sound is clear and warm tonally with voices especially, coming over coherently at all times. The use of the rear channels is more for creating the overall ambience as opposed to wham bam effects. That's not to say that they do not occur, just that they are used sparingly which helps to give them greater impact when they do. LFE effects are also used only when absolutely needed. There are a few standout moments which demand you 'feel' as well as see the action and on these occasions, the LFE digs deep into the lowest of frequencies to offer a visceral impact which works perfectly. A mainly dialogue driven movie, the sound is always good and occasionally great which is how a decent movie soundtrack should be. Apparently, if extras are your thing, then the two disc edition is the one to go for. That's not to say this single disc version offers nothing. Quite the contrary in fact, as there is still a wealth of worthwhile extras included featuring; Bad beginnings:

Building a Bad Actor shows us Jim Carrey creating his versions of the characters taken from the Snicket books. The books are not too specific about how the characters look so Carrey had a certain amount of artistic freedom in creating the characters how he sees them Making the Baudelaire children miserable covers the selection of the two actors for the parts of Violet and Klaus Baudelaire. It shows also a small screen test come movie trailer of Emily Browning and Liam Aiken which the Director used to see how the two 'connected' together and took this to show the studio when getting backing to make the movie Interactive Olaf uses a four way split screen to show Carrey's different characters which you can swap between with your remote to activate audio on that specific character. Alarming audio commentaries

Here you have the option of just the Director, Brad Silberling or Brad Silberling and the real Lemony Snicket. It goes without saying that the latter is the most fascinating and amusing offering some real funny anecdotes between the two.

a fairly good selection of both deleted scenes and outtakes although the quality of these are not the best. One standout moment for me was the outtake titled 'Working with Sunny' which shows Violet, Klaus, Aunt Josephine (Meryl Streep) and baby Sunny (played by twins Kara and Shelby Hoffman) sitting around the dinner table chatting when suddenly Sunny's head drops to one side and she falls fast asleep. Really sweet and really funny! The full list of deleted/outtake scenes is: A beautifully filmed movie and great performances from the lead actors help support the film's rather so-so story. It's not a bad storyline; it just could have done with a little more direction and purpose. The door has been left open for future sequels and the Lemony Snicket franchise shows great promise. Now if only Tim Burton showed an interest!