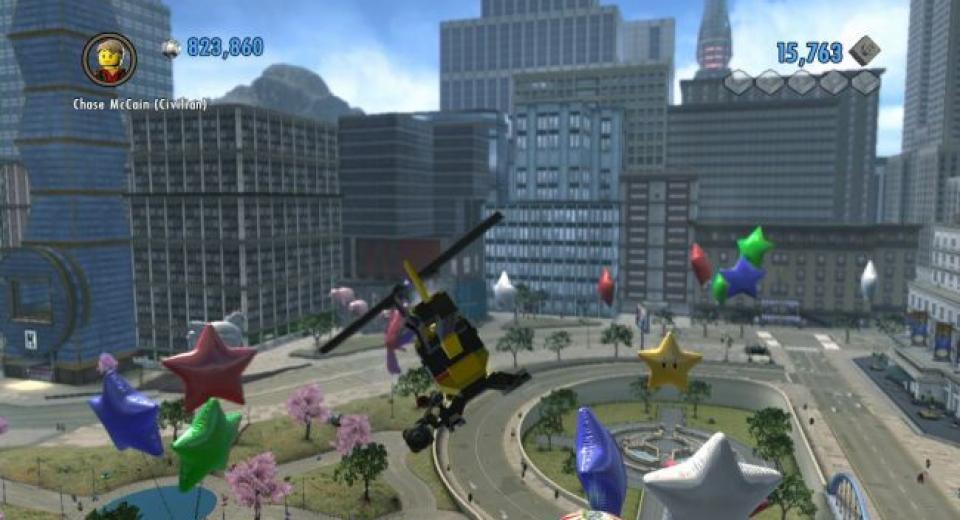 Whether Nintendo care to admit it or not, the Wii U is struggling and it’s had a bit of a bumpy ride since its launch late last year. With a recent price cut and a few developers stating they will not support the machine it’s left some loyalists flapping. Much like a rabbit at a hare convention, people are begging to question the Wii U’s presence within the current gaming scene which to some extent is justified.

Despite that there is a very steady stream of games heading its way over the next few months giving hope to owners allowing them to blow the layer of accumulated dust off of their GamePad. Nintendo have also managed to wangle some exclusives for the system as well and Lego City Undercover is one such exclusive title which will only see a release on Wii U and the 3DS. Originally speculated for a release closer to the consoles launch, it’s been a bit of a wait for this one to hit retailer’s shelves but the wait is finally over.

Upon the back of mass success seen for the LEGO games across other formats based on blockbuster movies and super heroes, Undercover is the first console title to have its own independent setting and storyline. It’s a risk but one that holds massive potential at the same time as it gives the writers and developers behind the scenes creative freedom to take the game where they want. Usual developer Traveller’s Tales (TT) have handed the baton to one of their subsidiaries TT Fusion who have worked on the portable LEGO titles in the past. Any regular readers of the site and/or listeners to the podcast will already know about the affinity I have for the LEGO games and my love for the last title, Lord of the Rings, still goes on. However, there is only so long that TT can rely on a polished look and familiar mechanics before things become a bit tedious and this title is the rocket up the posterior they, and Nintendo to some extent, needed to propel them to all things better and pastures new.

Whilst LEGO City has a storyline, it’s one that is completely tongue-in-cheek the whole way through and it never takes itself seriously. Replicating and mocking phrases, scenes and characters from 70’s and 80’s cop movies this game is literally full of laughs every minute. You instantly familiarise yourself with protagonist Chase McCain a cop returning to LEGO City to finish unfinished business. Along with him for the ride are a host of varying and hilarious characters which are well scripted and never over stay their welcome.

From the word go you are thrust into a world that is full of missions for you to undertake and objectives to meet but the temptation of going out and exploring is far too great to ignore. There’s only so many destructibles you can drive past before your innate desire for destruction takes over and you have to pull over and wreak havoc on all things bricky. There are only so many things you can do initially as story progression unlocks new features and abilities for later exploration. So Chase is here mainly to take down criminal Rex Fury who has escaped from prison and is on the prowl once more. Taking him down see’s you jet set all over the island, join criminal gangs before hunting them all down, then returning to your boss with a huge grin on your face. Much like previous LEGO games you will always find yourself coming back to this outing as it never lets up and has the perfect blend of style and substance.

The wealth of narrative goes most of the way to help the game succeed and with the audio channelled through the GamePad the world really comes to life as people don’t just talk to you but others around as well. In the end it makes a completely believable world, well as believable as LEGO can get that is.

As you progress you undertake missions which see you rob banks, chase down escaping criminals and even infiltrate space centres. If there’s one thing this game is it’s diverse and entertaining right to the end. The city itself is based on New York predominantly but influences from other cities and cultures are scattered throughout like the Venice waterway and forest sections.

Filling the shoes of a cop, you suddenly realise that your job comes with many perks and benefits the most pertinent of which is the ability to hail down any car and use it for your own purpose with a flash of your badge. The multitude of vehicles on offer is quite staggering all of which handle differently and suit their own purposes. Most of them handle like you’d expect, a bunch of bricks fixed together with wheels stuck on the bottom of them, but the ones later on handle much more smoothly. About 90% of the game is made out of LEGO pieces which are actually in circulation and most of which with good reason as it can all be destroyed and collected. As you’d expect the majority of your time is spent destroying things and reaping the rewards; coins and this time bricks from said deconstructed items. Coins can be used to buy various items during the game but the main currency are the bricks you collect in order to construct super builds. Super builds allow you to progress in certain missions via bridges, jumps and pads that allow you to call in vehicles.

Being a cop you have to arrest a fair few people and chase them down on foot or in a car. They all end in them being flat on the floor shortly before you slap them with some steely cuffs and there’s a nice little fight mechanic prior to this as well. It’s not in depth or overly complex but you can eliminate crims with a few nice takedown moves and slow-mo sequences. It’s a bit rinse and repeat after a while but let’s face it, you’re not here for a complicated melee system. The chases themselves make up for this shortcoming however as you climb drainpipes, fly across ziplines and stunt jump off and around walls.

With previous titles disguises and gadgets have been key to success and progression, and the same can be said here. It’s like Chase has got some sort of obsession with dressing up as he gets a multitude of costumes to unlock and wear, from the miner to spacesuits and robber outfits. Some of which fill a purpose of course; the robber can break into vaults and buildings, the spaceman can use teleport pads and the miner can handle explosives. Costumes unlock the secrets of Lego City that little bit further and it’s hard to resist stopping off to reach places that you couldn’t earlier on. There are many which are just silly little side bits but all of them add to the colourful palette that is Undercover and collecting them all will be one heck of a time consuming exercise.

We could talk till the end of time about how much there is to do here and how long it could take you to find everything and see all the secrets the city has to offer. Rest assured though there are up to 20 hours worth of campaign levels then add a heap more hours for the exploration and collectibles you will search for. You will want to explore the city too as the game looks sublime and is arguably the best looking Lego title out there. Everything gleams and glistens whilst every inch of the world has been polished to perfection and every character is animated and created excellently. There’re no instances of textures popping in too late or AI going scatty for no apparent reason, everything is in order here and finished to perfection.

The GamePad has been Nintendo’s main trick up their sleeve for the Wii U and here it is used effectively, not extensively but it is used enough to make it feel worthwhile and realistic. Chase had his own tablet phone in the game, making the gap between gamer and protagonist that little bit smaller. Much like in the re-release of Arkham City, the GamePad feeds audio of incoming phone conversations, displays your map and can be used to scan for hidden objects and people around the city in an augmented reality style. It’s nothing ground breaking that’s for sure but in terms of making games more interactive this takes one big step in doing so.

The biggest downfall for Undercover is its heavy loading times which are quite frankly shocking. It’s sad to see but not entirely unexpected given the Wii U has suffered with long loading screens since launch. I wouldn’t be joking if I said you could go make a drink in one of these load screens because it’s entirely possible depending on your beverage of choice.

Given the overall quality of the game it’s easy to negate the issues with the loading times and concentrate entirely on the rest of the game which is a massive success. It’s a great achievement for the series as it gives the franchise plenty of scope for expansion given that the successful movie licenses are running a bit thin on the ground for future tie-ins. It wouldn’t surprise me if we saw a fire fighter LEGO title in the future given the success and reception of this one and the open world sections of the in-production games are sure to be better implanted after this title. It’s a shame this didn’t launch alongside the Wii U as was initially touted as this - as a console seller - would unquestionably silence the rumours (or facts) that the Wii U has been a bit of a failure as of late. As it stands however the long wait for this title is entirely worth it and any purchaser is sure to hold on to this, even if it means their Wii U only gets used for this one title alone.

In short, there’s not much that LEGO City does wrong and it builds (pardon the pun) upon what the previous games have done and surpasses them excellently. From the hilarious script and acting to the mad missions of chasing pigs round a farm or stealing a T-rex skeleton from a museum, it’s a whirlwind ride through a truly well-designed city and one that will never overstay its welcome. Just because it's a LEGO game doesn't mean that it should be ignored by the more serious or 'core' gamers out there as this is a fantastic little game for younger players and older ones alike. Adults can play with LEGO too you know!