Legend of the Guardians: The Owls of Ga'Hoole Movie Review 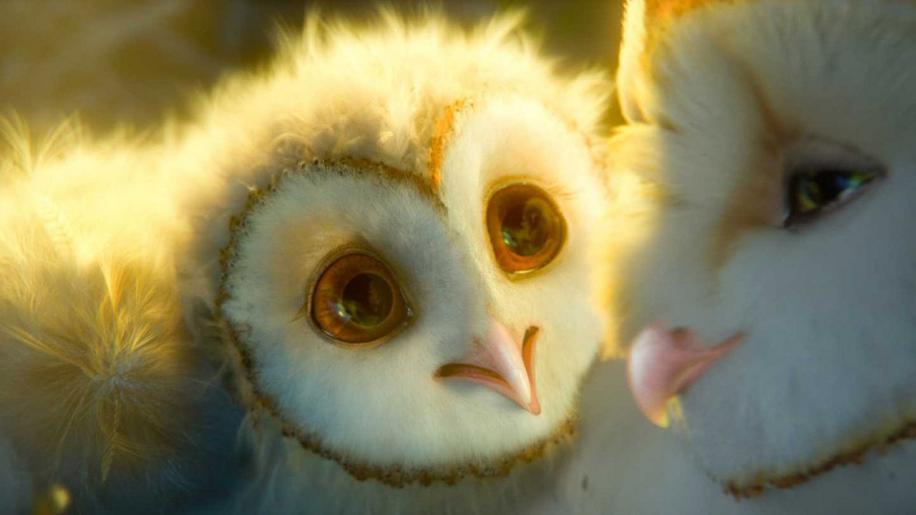 Legend of the Guardians: The Owls of Ga'Hoole Movie (2010)

Guardians of Ga’Hoole is an epic fantasy adventure set over a series of fifteen volumes published within a five year period between 2003-2008 and written by acclaimed author Kathryn Lasky. Warner Brothers acquired the film rights to the series in 2005, but it wasn’t until April 2008, and the attachment of Zack Snyder to direct, that things really began to move. Adapting fifteen books to a single film was, of course, impossible, so the writing team of John Orloff and John Collee chose to concentrate on the first three novels in the main, but borrow a little from books four and five, and add and subtract their own devices to round things off. Snyder may not be your first thought when you consider a kids fantasy adventure about owls with three R rated films to his name (Dawn of the Dead remake, the almighty 300 and the somewhat disappointing Watchmen), but with his vision the more spectacular elements are brilliantly realised and the whole thing plays at an adult level. The film, re-titled to Legend of the Guardians: The Owls of Ga'Hoole, is the subject of tonight’s review and, as we shall see, is quite the epic adventure, so steel your gizzard, spread your wings and let’s take flight.

We open to a succinct and wholesome family unit which serves as a base for all that is about to come. Soren is our main hero, but at this time he is unable to fly and is more interested in the legends of old, about the Guardian Owls and their epic battle to free his kin; he plays out these battles with his younger sister Eglantine, still with no real feathers, who hero-worships Soren and loves to play. We're also introduced to his older brother, Kludd, who dislikes these games and insists that the legends are nonsense. These opening scenes neatly set out the family bonds that will become so dependent later in film – the strained relationship between the brothers and particularly Kudd’s jealousy and venom. Even Soren’s attempts at healing any potential rift fail as Kludd sees him as a rival not as a brother. Such brotherly rivalry has been the backbone of literature right back to the Bible, here it is handled pretty well, these opening scenes giving just enough back-story to account for Kludd’s eventual behaviour – you do have to wonder about Soren’s unwavering loyalty to someone that clearly doesn’t want it though.

Jim Sturgess is the voice talent behind Soren and he imbues him with a kind of youthful optimism that throughout the film becomes more heroic in stature. The inflections in his Australian accent are well realised and it never hides the emotion behind the voice. If I had a criticism it would be that I felt his voice remained a little too youthful, a little like Olando Bloom in Kingdom of Heaven. No such qualms with Ryan Kwanten who voices Kludd; with an equally youthful sounding voice, but he manages to portray the menace and sinister turn associated with a twisted mind, especially so towards the end when his betrayal is complete – both cowardly and defiant.

After the two owls are captured by representatives of the evil ‘Pure Ones’, a race of Tyto owls, Soren befriends a dwarf owl called Gylfie, taken because she is small enough to be mistaken for an owlet. In the lair of the Pure Ones, whose name, demeanour and enforced slave labour invoke clear Nazi overtones, Soren and Gylfie are forced to pick through owl pellets for ‘flecks’, a metal ore with magnetic capabilities that affects owls. By avoiding being ‘moonblinked’, a type of hypnosis brought on by staring at the moon, the pair are befriended by Grimble, who only works for the Pure Ones for fear of his family being held captive, and thus rebels against them by teaching the owlets how to fly. Meanwhile Kludd, after denying his brother, is in awe of Nyra (mate to Metalbeak - the leader of the Pure Ones) and also of their order, and therefore seeks to become a soldier, replacing his real family with this surrogate one, feeling that he can truly reach his potential in this vicious and ruthless dictatorship.

The introduction of the baddies is a clear cut of black and white; whether or not the obvious World War II overtones of Nazism, the subjugation of ‘lesser species’, forced labour, rallying speeches to incite hatred and the blinkered enthusiasm of youth to the cause, are picked up by the films intended audience, remains to be seen, but those of an age will certainly see them for what they are. Director Snyder also introduces a nice juxtaposition of learning techniques when the owls are being taught how to fly; on the one hand there is the encouragement and reward, on the other, winning by spite/kill or be killed attitude and further draws the line between good and bad.

Of course, Soren and Gylfie manage their escape, but not before Grimble sacrifices himself by fighting Nyra to enable it. Nyra is voice by Helen Mirren who has a very regal but hard voice that comes into spectacular form against Hugo Weaving playing, in this guise, the downtrodden, but not defeated Grimble, stirring up the emotions of nobility – and when these two spar verbally, it is almost as action packed at their physical fight. Whilst on their escape flight, the two owlets fall across Digger and Twilight (thus making 'The Band' from the books) and together seek the Guardians to warn them of Metalbeak’s plans. David Wenham breathes life to the quirky Digger and the magnificent Anthony LaPaglia voices Twilight and both these characters provide a modicum of comic relief, Digger by his mischievous and unpredictable behaviour, Twilight with his penchant for singing ballads. Both are later given tragic back-stories to help flesh-out their respective characters and thus form a cohesive band of orphans that together find the mythical Guardians.

The Guardians are a race of Snowy owls that rule their respective land, the Great Tree, with benevolence and charity; it is a place of peace and love and in stark contrast to the dark, dank and depressive regime of the Pure Ones. Once Soren tells his tale of the Pure Ones to the Guardians, they dispatch one of their members to ascertain if there is any truth to the allegations, and thus begins the inevitable path towards war, that includes betrayal, mistrust and brotherly confrontation, for Soren, realising the trap sets out to rescue not only his friends, but also, as a consequence, the whole of owl-kind.

Snyder, after having spent the time to show us how awful the Pure Ones are, in the latter half of the film, spends the same, if not more, time on how well the Guardians live. There is teaching and understanding, democratic rule and light. We’re introduced to Ezylryb, voiced in magnificent form by Geoffrey Rush, who takes Soren under his wing and teaches him how to really fly, by the feel of his gizzard; the training flight through the storm, or the death defying flight through the fire, being of particular highlight. Rush’s voice is that of a wise old sage, somewhat ‘Obi Wan’ like, especially with its ‘use your gizzard, boy’ or ‘don’t turn to the dark side’ Star Wars connotations. This, in turn, gives Soren, and thus the audience, that father figure, that motivation to become that hero we know he is – even his ‘disappointment’ at finding out the true identity of Ezylryb is tempered by the knowledge of what it actually means to meet your hero.

I have a lot of praise for Snyder’s direction, particularly his use of slow motion, whether it be of the birds in flight, or their midair battles; yes there are plenty of ‘300’ moments, but with an eye for the PG rating – the action is there, but the violence is tamed. It doesn’t make it any less exciting, in fact, if anything, it heightens it due to your imagination taking over where the screen cuts off. But, where it does fall down is in the pacing. There is a lot of story to get through, plus there are a lot of characters, it's what happens when you condense three books into one film, so there are times when the focus tends to wander a bit. I can’t help but think that this might have been better served as two films, the build up and escape of Soren and the Band, ending with the discovery of the Guardians, then spend the second film building up to the final confrontation – much as John Woo did with Red Cliff – as this would have given both films the room they need to breathe. However, this film was marketed towards kids, it’s in the trailers and obvious from the presentation on this disc, and as such seen as a one film deal, no matter how convoluted the plot line might become. Which is a shame because somewhere within this great film, there is a magnificent film struggling to get out. Nevertheless the story of Soren and the Guardians fighting against the Pure Ones is a tale that will inspire the young willing to give it a try, and here, in its 3D guise, it is a totally immersive experience.