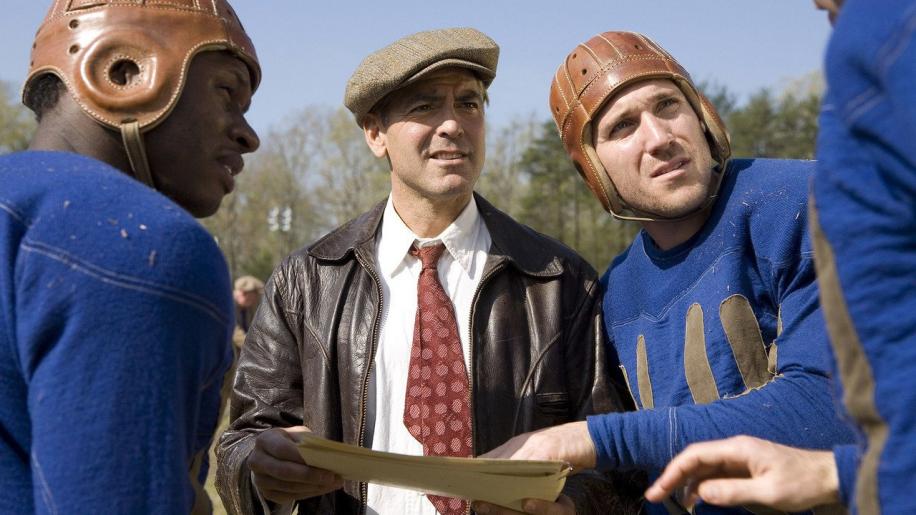 Romantic comedies are like London buses - you wait forever for one to come along and then two arrive at the same time. Last week I had the privilege of reviewing Made Of Honour, which I found to be both romantic and funny. This week, along comes Leatherheads, a romantic comedy that also involves the very masculine and macho sport of American football - in the days before the game actually had any rules.

The stars of the two films have a remarkably similar past. Patrick Dempsey from Made... and George Clooney from Leatherheads both started out playing handsome womanising doctors in American hospital dramas - Clooney in ER of course and Dempsey in Greys Anatomy. The late Dr Ross from ER has since gone on to become a massive Hollywood star and has tried his hand at directing and has pumped some of his hard earned back into the business as a producer...indeed his second foray in the directors chair, Goodnight And Good Luck was nominated for an impressive sixty awards, including a best director nomination for Clooney.


Leatherheads is Clooneys next outing in the chair - he also stars in this one along with Renee Zelwegger, Jonathan Pryce and John Krasiniski from the American version of the Office.

The story revolves around Dodge Connelly (Clooney) who was a massive college football star. His career was rudely interrupted by the outbreak of World War I when he went to war for his country. When he came back, he turned pro footballer - but these were the days before the NFL. College football would attract crowds of 40 000 people a week - pro games were lucky to draw in 40. there was no governing body and no rules - if a game ended in a draw, the two teams would often fight each other to determine the winner!

Back to the film...also fighting for his country in The Great War was Carter Rutherford (Krasiniski). He too sacrificed his education to fight in the mud of France - only he has returned a hero. The story is he captured a platoon of German soldiers' single handed.

Jealous of the fame and fortune that has fell on Carter since the war, his old Platoon Commander goes to a paper and says it's all a pack of lies. The editor of the paper gives the story to blonde bombshell Lexie Littleton (Zelwegger). Her task is to get Carter to cook his own goose so to speak - and confess that the war hero story is all made up. While all this is going on, the film tries to deal with prohibition, dodgy sports agents and the introduction of a governing body for one of the biggest sports in America - and of course, being a romantic comedy, there's also a love triangle...

Clooney obviously likes directing films set in different time periods. Goodnight And Good Luck was set in the 1950's during the cold war - this film is set seven years after the end of the World War I and Clooney does a brilliant job of capturing the feel and atmosphere of the period.

The costumes, language used and even the names of the characters reflect the era greatly. The recreation of the stadiums and the uniforms worn by the teams (including the leather helmets that the film gets it's name from) are authentic down to the type of string used in the laces...so attention to detail is the order of the day

It's a pity then that the attention couldn't have been swung a little in the direction of the comedy. After watching the film, I said to my wife that if the rest of the film had been as funny as the first ten minutes, it would have been the funniest film I had seen in years. But the jokes just dried up. There are moments in the film that have you in stitches for about five minutes - and then you don't so much as snigger for half an hour...

The onscreen chemistry between the main players in the love triangle is also missing the spark to start the smoulder...I felt that the romantic side had been put in for the sake of it. The story could well have ended the same had it not happened.

The accuracy of the timeline is pretty way out as well. The film is set in 1925 - but the American game went professional with the advent of the NFL in 1920 - some five years before this picture is set...maybe an oversight but considering all the effort that has gone into re-producing the era, a pretty unforgivable one.

Performance wise - lets just say that come that night in March, I doubt this film will have many nominations in the best or supporting categories. Set in about the same period is George Clooneys finest film by a mile Oh Brother, Where Art Thou. How I longed for him to don a false beard and break into A Man Of Constant Sorrow - that would have cheered me up no end...as it was, I felt a little let down by Leatherheads and found it neither romantic or funny.

Maybe one for a rental during a quite release month.