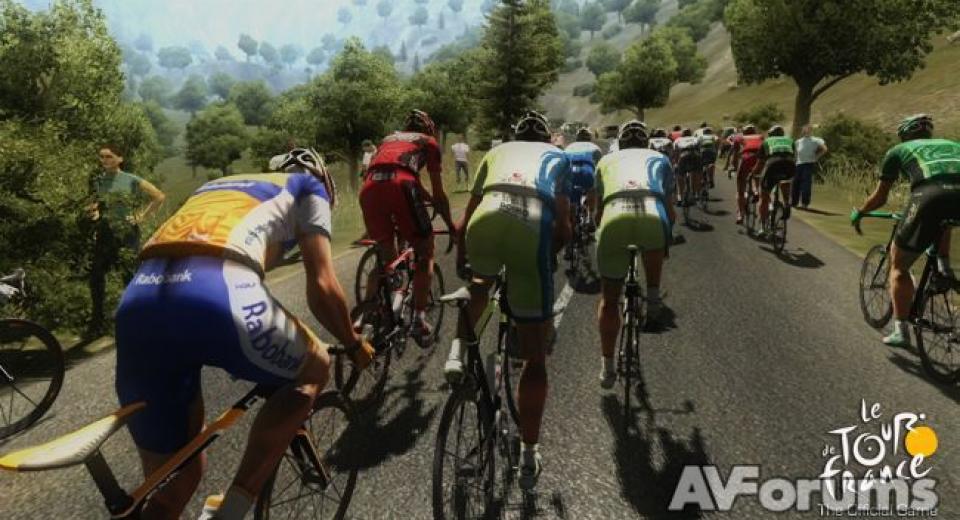 It’s that time of year when a select few people get on their bikes and ride around some beautiful parts of France. Yes, I’m talking about the highly prestigious Le Tour de France competition which attracts numerous viewers around the globe. The series is this year again treated to a video game counterpart that will hopefully pull in interest from a new crowd.

It is in the hands of Cyanide Studios (the ones behind Blood Bowl and the Game of Thrones titles) to do the event justice and allow fans of the event to live in the moment and take home the trophy in virtual form. So will the gaming crowd strive for the yellow vest or will they be hoping for a spike trap to emerge on the road ahead?

What’s immediately clear is that the whole title has not been given as much attention as it should have done in order to give the game as much glitz and glamour as the event itself. The menus are too bland and boring, whilst the same repetitive music resonates throughout the whole thing; the entire package just feels like it needed a little bit more love. The title is obviously intended to be played by the hardiest of TdF fans and as such it has a seriously limited audience as it is before the game is even released. This is not helped by how, for those who may be new to the series and just beginning their interest in it, the game throws you at the base of the nearest incline and expects you to get up it in record time.

‘Try out the tutorials then’ I hear you say and I would if they weren’t more boring than listening to Adele’s entire back-catalogue. Any respected racing game, heck even shooters, would have an interactive tutorial mode but oh no, Cyanide Studios have revolutionised the industry. Prepare to read through reams and reams of text in order to understand the game’s ins and outs. Yes, we really have taken that much of a step back in the gaming world.

Of course, many people who know their stuff will be familiar with much of the information here already, but even those who know the event pretty well will find this wealth of text alienating. Believe me, I asked one.

The amount of tinkering and strategy at your disposal is pretty good, assuming you know what you’re doing as you can formulate strategies with your team mates and even select which foods to take on board and when, but the way in which these options are offered is pretty dull. From one menu screen to another, your selections quickly become a chore when they play a massive part in your race strategy. If the game was more interactive then this would help massively and prevent the game becoming monotonous very quickly. Thankfully, Cyanide Studios did us a favour in some respects as the gamer will not race the full event in real time. No matter how die-hard of a fan you are, this will be a god send of epic proportions because nobody has the time to waste 5+ hours on one section of a race in real time. The bits in-between where the player is in control are simulated and reflect your strategy implemented earlier in the race.

On this note however, the game seems as if it is caught between two minds as to whether or not it is a racer or a simulation title, and falls flapping somewhere between these two genres.

What’s worrying is how, even when racing in short stints, the game is frighteningly linear and boring. The strategy side of things is hardly even hinted at, tied with the lack of engaging tutorials, whilst you have very little indication of how you’re doing in the race. The actual control of your cyclist is somewhat of a mixed bag; to go you simply hold the 'X' button but giving team orders is far too tricky as the options are buried under a mountain of directional button commands. The lightest of leans on the analogue stick will see you fly to the other side of the road and the sternest of pushes won’t get you round what should be an easily negotiable corner. Sometimes this is just under-steer but most of the time it’s just the games reluctance to allow you to turn.

As soon as you look at the game when it’s in action you will notice one thing; there are PS2 games out there that look better than this. It was said on good authority that the PC version of this game (a simulation title if I may add; Pro Cycling Manager which is well established) looks better than this when it’s running. The cyclist models are all the same with their plastic-looking legs, the environments are copied and pasted whilst the crowd shouts out the same three chants repeatedly until you’ll end up waking up and shouting them out in a cold sweat at night.

For those who can stick out the problems though and somehow find the pot of gold at the end of the ever-long rainbow, there is plenty to achieve in this title. I don’t doubt for one second that winning a stage, and eventually the race, through hard strategy and consuming foods at the right moment will be immensely satisfying. The thing is though that this reward is buried beneath a mountain of crud that is almost impenetrable.

By default, this is the best bicycle racer/simulation title out there on consoles but there is one massive problem; fans of the event are unlikely to play this title. Watching it, or even cycling on your own, is much more satisfying than playing this game which is a shame because it could be so much better and it should have been.

Le Tour de France 2012 is a game that has a right to exist but in its current form, it is highly unlikley to get any sort of attention in comparison to the actual televised event itself. Whilst it offers up what could be some great moments in terms of tight finishes and strategy planning, these options are buried beneath tricky controls and a lot of dull tutorials before you can come to grips with them. As a result, the game alienates even those who follow the series and are avid cyclists which is of massive detriment to its chances of selling in any great number. In short, go out and buy a bike instead.