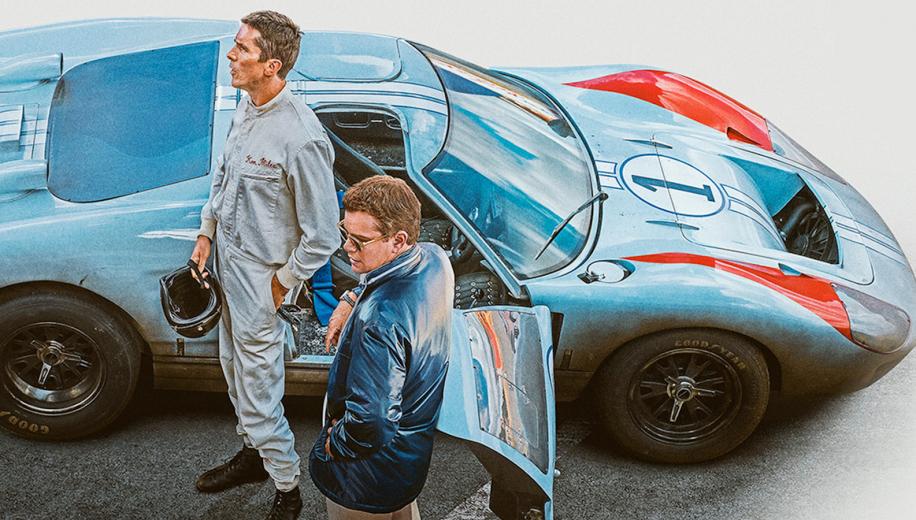 It may be called Ford vs. Ferrari in some territories, and Le Mans '66 in others (presumably because Americans may wonder whether they need to watch the 65 previous movies), but at the heart of Mangold's epic tale is the enduring friendship between former Le Mans champion Carroll Shelby and rough-and-ready Brit driver Ken Miles, which defines the piece and resonates beyond the expected corporate machinations as two of the biggest names in the car industry go head to head.

Whether you're throughly familiar with the history, have a passing knowledge of the key players, or don't know anything about what happened in the run up to the fabled Le Mans battle of 1966, Mangold weaves a fabulously rich tapestry of warring automotive giants, challenging technical achievements and underlying racing passion fighting to break free of the corporate chains that shackle almost every step taken in this journey - it's a classic underdog sports drama which should appeal even to those who aren't particularly interested in watching the full 24 hours of a real Le Mans race, managing to inject some Days of Thunder-esque Hollywood action-racing into the piece and yet retain a thoroughly authentic feel so that it never betrays the more realistic style that is clearly being aimed for here.

Damon and Bale are fabulous together, with palpable chemistry that bolsters what feels like a genuine friendship, with Bale perfectly chosen for the rough-around-the-edges Miles, whilst Damon enjoys a solid spin as the former champion pulled out of racing for medical reasons, and torn between towing the line with the Ford suits and reliving the driving dream vicariously through Bale's passionate and uncontrollable driver. It's interesting to think that Cruise and Pitt were once attached to these roles - a further nod to Days of Thunder - particularly since Bale and Damon are so good that you can't imagine anybody besting this combo.

Mangold is worlds away from his other Cruise project, Knight and Day, here, going instead for flashy but inherently gritty realism, recreating the thrilling racing sequences with wonderful intensity, and giving the film surprising impact - and palpable heart and soul too. Ultimately, it's not the Ford vs. Ferrari element that draws you in, but the battle between these pure racing souls and their own cold corporate backers, balancing frustration, tragedy and a look at that natural racing spirit which transcends everything else.

Le Mans '66 was shot digitally using Arri Alexa cameras with a resolution of up to 4.5K, but ultimately - reportedly - only finished as a 2K DI (despite IMDB suggesting full 4K), which has been used for this Ultra HD Blu-ray release. And don't let the rumours of a 2K distract you, this is one of the most stunning video presentations of the year so far.

Brought to life with an epic scale to the races, the crowds in the stadium, the cars, drivers and the racing itself, this is a gorgeously rich feature, thoroughly filmic in style - which enjoys a suitably down and dirty approach to its racing - yet popping with eye candy at every turn. Skin textures, lines and dirt abound, picked up in their every intimate intricacies, with a textured feel but a glossy style which provides the best of both worlds. An easy step up over the standard 1080p Blu-ray, the image comfortably belies its reported technical limitations, although some element of this is likely also due to subtle but very effective use of HDR.

Even without Dolby Vision, HDR is exquisite, bringing us gorgeous vistas - stunning sunsets - and tremendous deep primary tones. Sure, there's an adherence to the 60s setting and all the colour coded trappings therein, but, as with the glossy/gritty combo, the colour scheme strikes an unlikely balance between primary pop and more restrained period pastels, rounded off with solid, deep and inky black levels that form the backbone to the piece. It's a fabulous demo image mastered to reference near-perfection.
﻿

The Dolby Atmos track provides a throaty, intoxicating 3D object-based high definition immersive audio assault, running a bit hot - a little like the GT40 - but losing none of the nuance as a result, with a guttural, persistent undercurrent of LFE presence to bolster the races in particular.

Dialogue is rendered with clarity throughout, afforded prominence over the frontal array and clear even during the noisy-as-all-hell racing sequences. Beltrami's score - reuniting with Mangold after a number of strong productions together which culminated in Logan - is a surprisingly effective balance of the film's lighter, funnier side and its weightier more emotional, and more passionate, chassis, lending sobering impact to the more tragic moments but also bringing the thrill of the race to life. Of course it's the racing sequences which stand out, and petrolheads will drool at the sound of some of the engines on offer here, as the revs hit 7000 - and beyond - and the power of the mix threatens structural damage to your home cinema. Superb.
﻿

Although there's nothing on the 4K disc itself, the accompanying Blu-ray contains a healthy look behind the production.

The main extra comes in the form of a set of 8 mini-Featurettes which actually come together to form the best part of an hour of Behind the Scenes material, detailing the real life characters and events, and going some way into exploring how the film was put together. It's a solid effort, capped off with some Trailers.

A bit of a surprise winner - few could have predicted the welcome Oscar nod for Best Picture, let alone the further three nominations, two of which it won - Le Mans '66 is a very engaging biographical sports drama which has enough heart and soul to enthral well beyond its core fanbase of racing aficionados, not least thanks to a pair of superb lead performances and keen direction from Logan's James Mangold.

Fox's UK 4K Ultra HD Blu-ray release delivers the goods - and then some - with a stunning 4K video presentation and a loud-as-all-hell Dolby Atmos track, as well as a hefty hour of behind the scenes Featurettes, leaving it a great package that comes highly recommended.
﻿