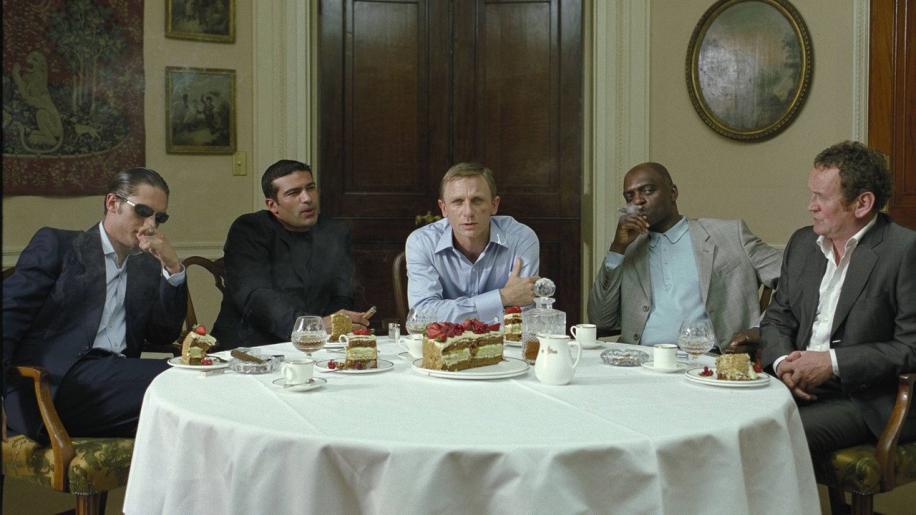 Layer Cake, the title, doesn't really conjure the image that matches the story that lies within, however it is appropriate as it is a layered storyline, with more than a passing nod to “Lock Stock” insofar as they both revolve around London, crime and several story threads all pull together in the climax. However, whereas “Lock Stock” displayed London's seedy criminals as caricatures, making them come across almost as violent “Del Boys”, this is much more serious in its execution. Daniel Craig plays a rather successful cocaine dealer who is well regarded by Jimmy Price (Kenneth Cranham), a criminal kingpin. Craig has been setting himself up for an early retirement and his plans go awry when Price gives him a particularly tough assignment - fine the missing daughter of Jimmy's old pal, Edward (Michael Gambon). Further complicating issues are 1 million stolen ecstasy pills, a gang of Serbs and enough double crosses to keep everyone on their toes.

Matthew Vaughn, the director of this movie was the producer of Snatch, so comparisons are inevitable with the two most recent, popular crime movies based in London, which are Snatch and Lock Stock, as I have already mentioned. As previously mentioned, where the former two movies have had humour very much apparent and even portrayed the criminals as likeable, this movie does neither. You can feel some affinity towards Craig's character (whom is never mentioned by name) as he clearly made his money and wanted out, so that he could escape his current line of work, but that's not saying he's likable, just identifiable to a degree. The cast however, is rather impressive besides the already mentioned; Colm Meaney is always good to watch as is Michael Gambon. The only real weak link here is Sienna Miller, who although equips herself well, is only in very few scenes and feels almost like eye candy, particularly when parading in lingerie (Jude Law is lucky, way lucky), although is it me or does she look like Patsy Kensit in her youth? Regardless, the plot moves at a pretty rapid rate, so rapid if you pop out for a cuppa, you may find yourself needing to rewind as it'll take a little time to catch-up otherwise. To say to much about the plot would give away some of the twists and turns of the plot, so I've deliberately kept it quite vague. One scene in particular is particularly violent, while not showing you what's happening, it is viewed from the victims POV, while Duran Duran's “Ordinary Day” is playing in the background. I'm not against violence at all, but it is reasonably brutal for a 15 certificate. It's not bloody violence (for those who are squeamish) but violent nonetheless, in fact it only has a few shots that are bloody, but then again, it wouldn't be convincing as a gangster/crime movie without violence or the threat of it. I enjoyed this movie for what it is: an actual serious gangster movie and is certainly grittier than “Lock Stock” and “Snatch”. Definitely worth adding to the collection if you liked those movies, or even The Long Good Friday, especially for the ending.