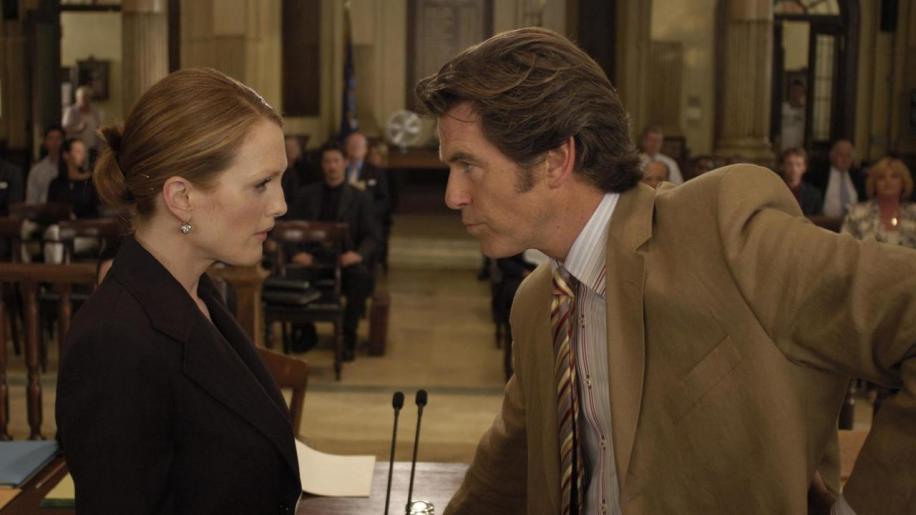 Laws of Attraction is an instantly likeable feel-good comedy. Audrey Woods (Julianne Moore) is a slightly neurotic, paranoid divorce lawyer at the top of her game. Top student at Yale, hasn't lost a big case yet. Daniel Rafferty (Pierce Brosnan) is a brilliantly laid back divorce lawyer with a similarly impressive history of zero losses but prefers to take the more eccentric path to success. Think Thomas Crown of the Thomas Crown Affair, but slightly more lovable! The two lawyers almost immediately share a passion for each other; Daniel is abruptly forward at times whilst Audrey tries to deny her feelings. This doesn't last long as they share two important drunken nights early on, one sees Audrey waking up next to Daniel, yet has absolutely no memory of having gone home with him the night before; the next sees her wake up next to him with a wedding ring on her finger!The movie follows a quite standard issue rom-com storyline based around them now needing to act the married couple to keep face in the public eye - although we the audience know they should be together anyway. But quite refreshingly the script is wholly original (and intelligently witty) as are most of the gags. Real laugh out loud moments inspire eruptious laughter from the men in the audience as man's man Pierce Brosnan will always try to do something unbelievably smooth to one-up Julianne Moore's Audrey. These are followed quickly by an uproar of laughter from the women in the audience as the helplessly neurotic Audrey risks embarrassment yet again whilst on the defence. Brosnan and Moore really are a fantastic on-screen couple wholly proving the opposites attract cliché time and again throughout the movie. Then there is the supporting cast! Audrey's Mother (“I wish you wouldn't call me Mother in public”) Sara Miller, an extreme New York socialite regularly undertaking plastic surgery and botox parties, is played by Frances Fisher who is only 8 years older than Moore in real life. And no-one will forget famous clients British Rock Star Thorne Jamison (Michael Sheen) and fashion designer wife Serena (Parker Posey), both having a combined IQ of a Strawberry Shortbread (“But I like strawberry shortbread!!”) - highly entertaining comedy relief in a film that needs no additional comedy relief.All in all while it doesn't quite aspire to the romantic comedy benchmark laid down by movies such as As Good as it Gets; Laws of Attraction is a brilliantly put together comedy, with plenty of original romantic moments and situations that even the most downright miserable among us will have to laugh along.