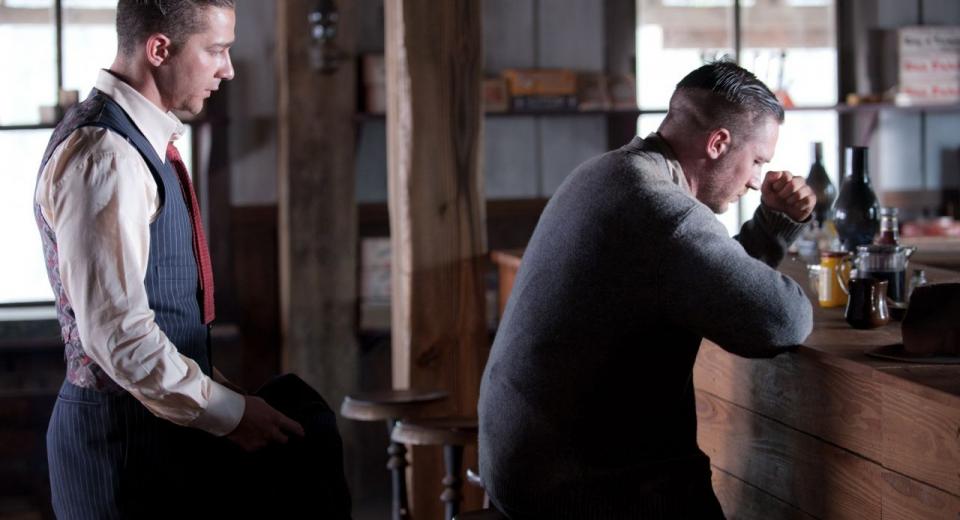 Lawless looks stunning. This Region B-locked UK Blu-ray offers up the movie with a 1080p High Definition video presentation in the original theatrical aspect ratio of 2.4:1 widescreen, and it’s a reference quality presentation through and through. As I’ve already praised the cinematography in the movie review, it comes as no surprise really that much of the movie could be used as demo material; the establishing landscape shots; the sequences which observe drooping trees (at one point erupting into an explosive fireball) – there are some truly beautiful shots on offer, and the presentation delivers them in all their glory.

Fine object detail, background touches and nuances; every little bit of set texture and clothing weave is well-observed, with rich and authentic skin tones throughout. Sharpness resounds, without even the slightest hint of edge enhancement, and with unwieldy DNR and excessive noise absolutely non-existent. That’s not to say that there isn’t still a gritty feel to the production, only that the filmmakers didn’t choose to rely on intentionally dirtying the picture just to achieve this effect. And yes, sure, there are some very brief hints of softness rounding out the edges of a couple of shots but it's just not enough to detract from the perfect score.

The colour scheme rides a fine balance between sombre, period tones, and more vibrant tanned skin pallor; between brown and grey-dominated clothes and sets, and vibrant green grass and beautiful blue skies – retaining a distinct air of authenticity whilst also allowing the style to be a little more lively than you might normally expect from this kind of period affair, which would have normally been sepia-tinged just for good measure.

Night sequences also look spectacular, with deep, rich and enveloping blacks that draw you into the bottomless shadows without the shadow detail itself paying the price; witness the night snowfall sequence after Forrest has gone outside to check on the car – it simply could not look any better. And this is pretty-much the sentiment surrounding the whole video presentation. Spectacular. On the aural front, the accompanying DTS-HD Master Audio 5.1 track is almost as impressive as the video presentation. Driven by a suitably engaging steampunk-flavoured pseudo-period score, the track also offers keen observation of the effects so as to craft a heady background atmosphere. Dialogue comes across clearly and coherently throughout – even Tom Hardy’s unusual murmurs come across distinctly, far better than in the cinema – and takes precedence over the fronts and centre channels where appropriate.

Effects take in the weeping tree branches swaying and rustling in the wind; the crackle-and-pop engine noises of the still fairly early motor cars; the percolating of the makeshift moonshine distilleries; and even the occasional gunshot and explosion. Indeed it’s not the louder moments that stand out on the track, but more the vibrant background atmosphere, which helps enhance the authentic period film no end. Of the gunshots, it’s Gary Oldman’s Tommy-gun spray that will rattle most loudly; the rest of the almost toy-guns seldom coming across as quite as penetrating; and the single explosion effective mainly because of the seemingly beautiful natural, stillness that it sharply and violently interrupts.

LFE is used warmly to round out the rest of the proceedings, although, again, does not every really thump at you intensively. The score is a true high point on this track, given keen precedence and igniting some of the sequences very effectively, blistering over the surrounds with punch and panache. Whilst not sheer perfection, it could still be easily used for demo material. Superb. Whilst not quite packed-to-the-hilt, Lawless comes to UK Blu-ray with a welcome spread of extras, bolstered by a fair amount of input from the director John Hillcoat and also the author Matt Bondurant himself, who collaborate for a series of background Featurettes as well as delivering up a Commentary together. Indeed it’s perhaps only the Deleted Scenes situation that comes as a disappointment.

Director John Hillcoat and Author Matt Bondurant contribute a welcome full-length audio commentary which delves into the rich history of these real-life characters and details both the true and fictionalised elements of the drama. They talk extensively about how they brought the period to life, attempting to make it both rich and authentic in detail, whilst also expanding more broadly on the historical period during which the story’s events took place. Anybody who enjoyed Lawless should consider this a welcome listen, and a stepping-stone towards perhaps investing in Bondurant’s source novel.

Lawless: The True Story of the Wettest County in the World is the meatiest of the supplemental Featurettes, with the cast and crew offering up extended interview snippets looking further into the real historical period; it’s presentation in the movie, and the known events from history that took place during that time. There are plenty of archive historical shots included here, juxtaposed with the relevant snippets from the film itself.

Franklin County, Virginia: Then & Now spends 6 minutes comparing this county across time periods, offering a welcome insight into the changes that have taken place, as well as some elements which have stayed the same!

The Story of the Bondurant Family offers up 13 minutes in the company of Author Matt Bondurant himself, who further charts his family history and how he put it all together into the novel which was the inspiration behind the film.

Perhaps the part I was most looking forward to – mainly because of the interviews with the Director and Screenwriter, who both revealed that the ending to the movie was very contentious (as were several other scenes during the film) and that they shot several different versions, none of which we get here. Instead we get a selection of 6 Deleted and Extended sequences, totalling 8 minutes of additional footage (although a portion of that runtime should be disallowed as they use quite a lot of final film footage either side of the scenes in order to place them in the context of the runtime of the movie), most of which is fairly throwaway.

Some of the scenes are just a few seconds long; some offer up little alternative to the final version, and only perhaps the extra moments between Jack and Howard and between Howard and Forrest are worth a watch – the former immediately following the beating that Jack takes (which is already readily fading from Jack’s face) and the latter being when Howard reveals to Forrest Jack’s plans regarding the moonshine (probably cut because Tom Hardy didn’t quite seem in-character for this bit). The closest we get to an alternate ending is a variation on one of the preceding end scenes where one of the kids gets to play with Forrest’s brass knuckles – certainly this would have been a better point at which to end the movie, if that was ever on the table.

The disc is rounded off by the supposed Music Video for Willie Nelson’s Midnight Run, although this is actually just a ninety-second promo for both the track and his album. Lawless is a gritty gangster drama, punctuated with shocking brutality and driven by an array of quirky but commendable performances. Richly authentic in its period setting and often staggeringly beautiful in its picturesque landscape backdrops, the film is only let down by some inherent flaws to the underlying story; a lack of focus which is split between two lead characters; and a distinctly anticlimactic ending. It should have been great, but that doesn’t mean that there aren’t some great moments – not least from man-of-the-moment Tom Hardy himself.

With stunning video and audio presentation, as well as a reasonably hefty selection of extras, fans should consider this Region B-locked UK release a must-have purchase. For all those interested, it’s definitely worth a rent, and you’re not going to be too disappointed with a blind buy so long as you go in with reasonably tempered expectations. Memorable but flawed.