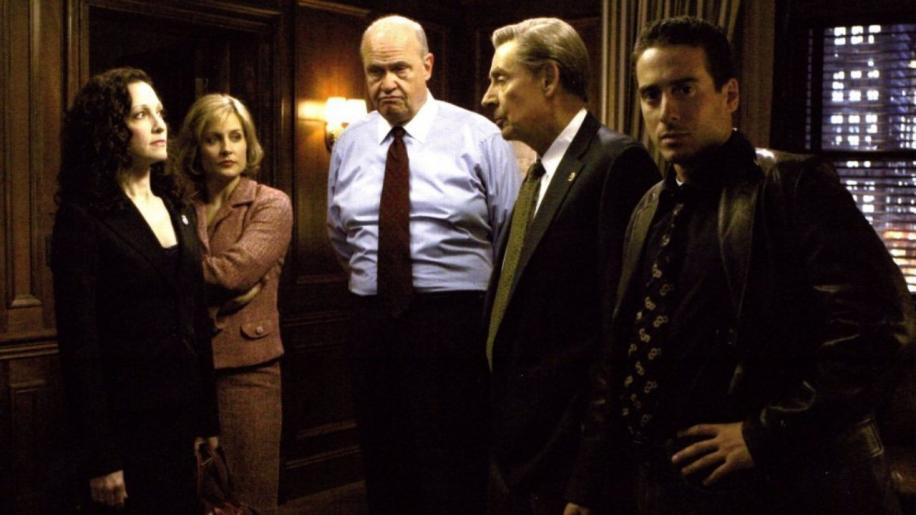 Coming in with a standard TV image ratio of 1.33:1, Law & Order doesn't look too bad at all. Sure, there is a little shabbiness to some background objects, such as law books on a judge's shelf, or people seated around the courtroom, but the colour, depth, detail and clarity is picked up well by the transfer, ensuring a pretty enjoyable picture throughout. With some reassuringly deep blacks and a robust sense of framing, each show looks cinematic and well-balanced. There is a thin sheen of grain evident but, on the whole, the picture is warm and well-produced. It may be blessed with a DD 5.1 mix, but this Law & Order release doesn't deliver anywhere near the surround sound quality you might have hoped for. Whilst dialogue and score are presented fairly well, with no acoustic discrepancies to speak of, the effect is purely of the frontal variety, with only the most minimal of ambience picked up by the rears. Voices are crisp and clear, and the soundscape, as limited as it is, has a warmth that is always engaging. Stereo separation across the front is barely felt, with only the occasional voice, car horn or door closing making any impact.

If it wasn't tagged as a 5.1 track, this would be perfectly acceptable. From a full-surround viewpoint, this is considerably sub-par. Besides previews for Munich, Miami Vice and the range of Law & Order shows on DVD, this release offers us a smattering of deleted scenes, which don't really add much to the grand scheme of things, a series cross-over episode called “Night”, which, despite being a good episode in its own right, will only have any particular resonance if you are a fan of the Special Victims Unit spin-off, and a very brief featurette called A Different Look At Law & Order. Lasting for only 6.32 mins, this slight series overview contains interviews with Neuwirth, Carlson, Scott Cohen, Kirk Acevedo, the late Jerry Orbach and Fred Dalton Thompson. With most of its running time taken up with clips from the show, this is very light, one-watch-only stuff. And immediately forgettable. The participants do, however, offer a nice tribute to Jerry Orbach.

But, as ever with these types of TV boxsets, the real deal is the show itself. So, the lack of any prime extras is not at all surprising. Law & Order: Trial By Jury is a great little show. As I've already said, I'm no lover of legal dramas, but I still found each and every episode compelling, interesting and well produced. The acting is consistent and the writing is excellently lean and full of juicy dialogue. A cool show to shove on late at night for a bit of a courtroom-fix. The AV quality allows for a pretty decent picture, but sound that, whilst clear and sharp, doesn't exactly fulfil the promise of its surround specification. Extras are thin on the ground, but the package is still recommended. And, besides, it's always nice to have the entire set of something in one go, without having to wait around for season 2, or 3, or whatever.