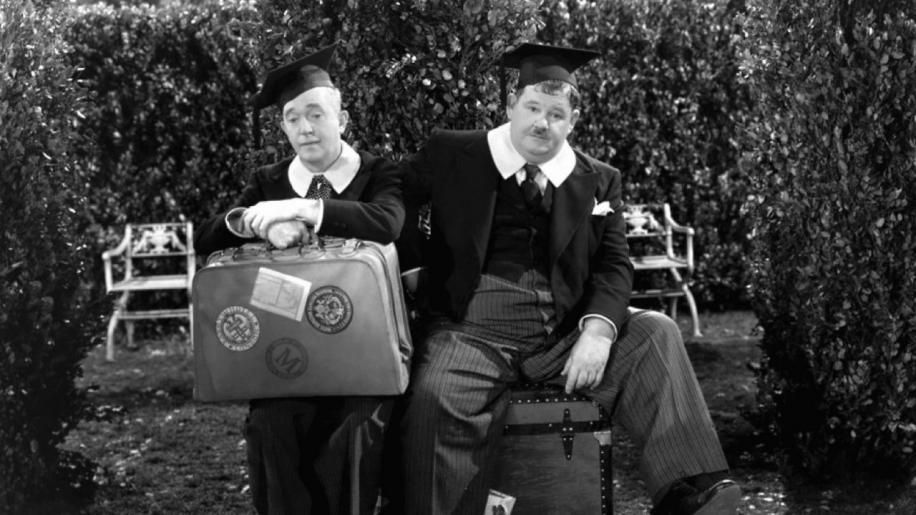 Many of these classic black and white movies have been “treated” to a colourization process - something I'm not too keen on as it always seem to make everything even more unnatural than the original black and white! Between each movie we are assured that the films here have been newly restored and painstakingly preserved as well as being transferred to safety film from the finest surviving 35mm elements. The movies do seem quite clean and crisp at times, with contrast levels in particular being surprisingly good for films dating from the '20s, '30s and '40s. Never-the-less you should not expect crystal clear, high definition transfers and many of the films have a myriad scratches and print defects, but I would guess this is as good as it gets for such old stock. As would be expected the later the date the better-looking things get - take a look at the “original, expanded European version” of A Chump At Oxford for example - I wish some of my early video recordings looked this good!

Nobody will be expecting reference quality video images, and in all likelihood nobody will be disappointed. But these are movies from a different era and I have no qualms in scoring the picture with a “2” whilst still praising the image quality. Unsurprisingly, perhaps, I cannot say the same for the audio side of things. Scratchy, hissy mono or scratchy hissy stereo - thems the choices! Of course the level of hiss ranges from rather bright, to virtually unobtrusive... as long as you don't listen at reference levels (!) things are fine, with nice clear dialogue always an important element. I feel I should make special mention of the music accompanying the silent movies - clear, clean and hiss-free! How this is accomplished with audio tracks dating from as early as 1927 is absolutely incredible (at least I assume the audio dates from the same time as the movies themselves). With an original version of Brats, extracts from the German version of Pardon Us, Thundering Fleas, Fluttering Hearts and Prudence and a documentary: Laurel & Hardy - A Tribute To The Boys, dating from 1991 there's a fair few supplemental features included in this box set. I think many of the included films can be thought of as “extras” also - for instance Noche De Duendes, which is simply The Laurel and Hardy Murder Case re-made with everyone (including Stan and Ollie) speaking their lines in Spanish! I'm not sure why, but I found this version funnier!! Solid stuff. True fans of Laurel and Hardy will, I'm sure buy this box set. Others may be intrigued... but with a price tag of nearly £200.00 will they be swayed? I suggest you should be - if necessary sell your Mother-In-Law, add a few quid and buy the definitive Laurel and Hardy movie collection. Alternatively, you could always buy the DVDs individually - they're also released on 3rd May priced at £15.99 each. The box set is pricey, but recommended - especially for collectors.