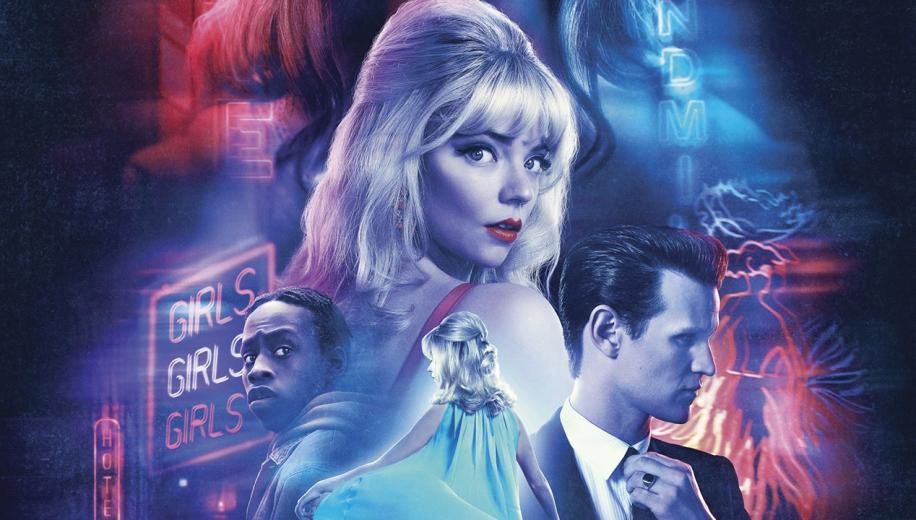 Clearly the genre closest to his heart, even before comedy, filmmaker Edgar Wright is a dabbler in horror. From the ever present Evil Dead poster in the flat and entire episode devoted to Resident Evil in Spaced, to its natural successor Shaun of the Dead; from the slasher in Hot Fuzz, to the evil bodysnatcher robots of The World's End, horror is where a great deal of Wright’s talents lie. So a turn away from comedy and toward an out-and-out ghost story should be one of his finest movies yet. So why couldn't he stick the landing?

Ellie is a fashion design student in her first year at the University of the Arts, London. Nervous about her move from rural Cornwall to the city and struggling to mix with the shallow, bitchy residents in university halls she decides instead to rent a bedsit in Soho. But as Ellie sleeps in her top floor retreat, the building’s chequered past and its previous occupants begin to flood Ellie’s dreams and it isn’t long before these images of the past begin to invade her waking life too.

The film opens with Ellie in her secure, caring rural environment before shipping her off to Fashion school. It’s a nice moment, not just because it gives Thomasin McKenzie a chance to demonstrate Ellie’s endearing and tragic child-like innocence in the face of adversity but because almost everything immediately exclaims “directorial choice,” from the little details like the posters on the wall to the almost exclusive use of medium close-up.

There are some smart, subtle nods to Wright’s own filmmaking style here too: Ellie is introduced with a literal needle drop and just as the 60’s pop hits begin to swell, an abrupt (equally literal) record scratch moment punctures her carefree moment with distinct unease. The use of literalism in such a self-referential way to shift into a more sinister mood sets up a movie that promises to bring you all the things you like about an Edgar Wright picture in service of a darker plot and with greater self-examination. It delivers on only a couple of those things.

The visual storytelling is inventive and stylish...

With Ellie in London, things begin to unravel, both in terms of her safety and certainty – starting with a leering taxi driver and her ‘mean girls’ roommate – and in terms of the production. The film leans heavily on the type of smash cut editing that lent such levity to movies like Scott Pilgrim, and occasionally on the heightened realism and stylisation of dialogue of the 'Cornetto' movies, particularly in its use of juxtaposition of script against scene context. But with the focus on darker content, these moments feel at odds with the momentum of the movie so, while you’re getting some good bits of Edgar Wright style, you’re not necessarily getting the right bits for the right moments.

With the Cornetto Trilogy (Shaun of the Dead, Hot Fuzz, The World’s End) Edgar Wright showed us he could write blistering jokes, orchestrate dynamic action and grapple with some fun horror tropes, all while injecting a healthy dose of pathos where necessary. Those films demonstrate how much Wright cares for his craft and his characters. Which is why it was a slight disappointment when the original characters from his last film, Baby Driver, were so forgettable and the emotional elements so badly fumbled. Wright possibly over-corrects with his latest, Last Night in Soho, which demonstrates some great character work under some heavier themes but feels a little under actualised in its construction.

Judging by his career from Spaced onwards, pastiche or homage are where Wright feels most a home and its his playing with other people’s toys that has previously brought so much entertainment to movie screens. It’s unsurprising then, how brazenly the film wears its influences on its sleeve. The obvious line to draw is between the modern trend for atmospheric, slow burn psychological horror and the gaudy primary coloured lighting and copious blood-letting of Mario Bava and Dario Argento.

But for all the referencing of horror cinema past, it’s perhaps more surprising that it is in the horror elements that Last Night demonstrates most of its originality. Cunningly sliding between and blending troubling sexual dynamics, teeth-gritting imposter syndrome, psychological horror, haunted house tropes and jump scares (one of which is particularly mean), there is real tension in the film, even when you think you know how it’s going to play out.

Wright excels at what he excels at. The visual storytelling is inventive and stylish and his use of mirrors throughout gives the opportunity for some brilliant in-camera trickery. There are some great set pieces too, particularly a 60's dancehall moment (surely a Pulp Fiction nod) and a truly disturbing moment in which Ellie can’t distinguish between the terrifying experiences of the past and her passion for her boyfriend in the present. But the departures from Wright’s usual go-tos (this is his first film with a paired female lead as well as his first to feature a black character with both development and emotional stakes) highlight the gaps in his range. There’s also an ongoing issue with other visual motifs which are set up, but which don’t particularly act upon the plot. That promise of a more reflective filmmaker is never really carried through and the choices in the final act even lead you to question if it was ever there in the first place.

Brilliant performances all round...

Front and centre throughout the film is what an enormous get the cast is. Lending cold menace to match cold menace, Anya Taylor-Joy and Matt Smith as ghosts of the past, Sandy and Jack create a believable abusive relationship in which control slides between the two of them. Lending true 1960's credibility to the film are Terrence Stamp and Diana Rigg as aging veterans of the seedier Soho scene. Only Thomasin McKenzie herself struggles with the range of character required for Ellie and even then only for moments at a time. Brilliant performances all round maintain both the emotional stakes and the bait-and-switches of the plot. And those bait-and-switches really take some maintaining especially as the film moves into its uneven and undermining final act.

In some respects, Last Night in Soho is a bold, if slightly clumsy, step away from Wright’s M.O. but, in others, it still feels very safely within his wheelhouse. Slick, quick-witted, perfectly sound-tracked, dynamically edited, despite its heavier themes and tonal departure, this is unmistakably an Edgar Wright movie for better and worse.