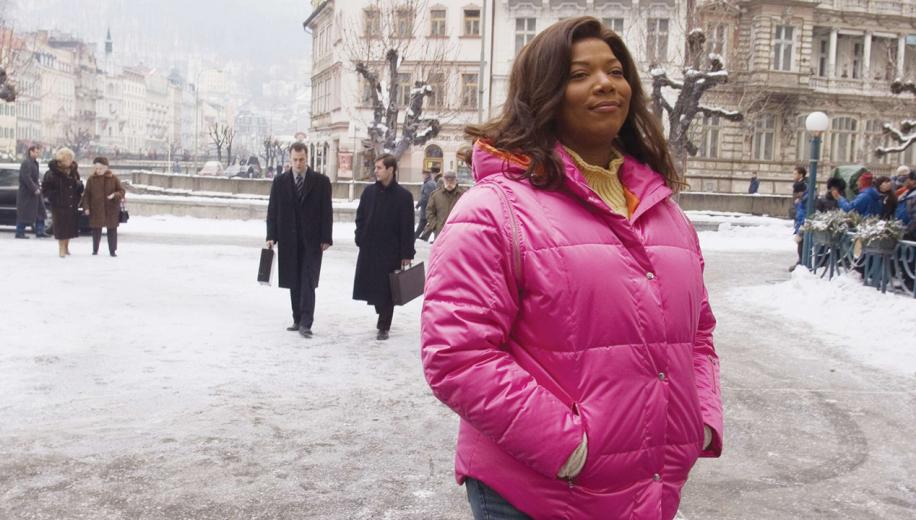 Last Holiday is presented with a 2.35:1 aspect ratio anamorphically enhanced widescreen transfer that makes it look pretty classy. The detail is generally excellent, with clarity throughout, little noticeable softness and negligible grain. There is some minor edge enhancement, but nothing to impair your viewing pleasure. The colour scheme is broad and luscious, with the rich, deep gold of the lavish rooms competing with the deep, vibrant reds of the outfits. Blacks are solid and deep as well and overall the transfer exhibits no signs of print damage.

We get a reasonably decent Dolby Digital 5.1 track to accompany this movie, with good vocals that come through crisply and clearly from the frontal array, some interesting effects (whether crowds clapping or kitchen staff beavering away) to broach the surrounds and a fairly active score that is totally in line with the movie content. We get plenty of feel-good tracks stuffed in to have you singing along (if you are so inclined) and a tinkling instrumental background score to pull at your heartstrings. There is also a restricted Dolby Digital 2.0 alternative, as well as a French-dubbed 5.1 track if you so require.

Last Holiday: Packing Light is a fifteen minute look at the movie, the material, the script and the director chosen, also focussing on how it was about a character tailored specifically for Queen Latifah. There's plenty of behind the scenes footage (much more than there is final film footage, thankfully) as well as a bevy of interviews with key cast and crew members. The video quality is a little dodgy on this Featurette - rather oddly - but otherwise it is a worthy extra that is sure to interest those who enjoyed the movie.

Last Holiday: Last Look lasts nearly eight minutes and looks specifically at the settings, how they depicted New Orleans versus how they brought across Prague. This is predominantly crew-orientated and much more technical, discussing how scenes were shot, the mood they were trying to get across and the contrast between the different styles.

Last Holiday: 23 Years in the Making takes seven minutes to look at how long this movie sat in development before being finally made into the movie that it is now (contradicting the proposition that it was tailored for Queen Latifah). They discuss the original movie that it was based on (starring Alec Guiness), how they secured the rights and how they adapted the script to give it a modern feel. This is quite an interesting little background Featurette into the story behind the story of Last Holiday.

There are also two Deleted Scenes: Kick the Car and Where to Cowboy? Totalling little over two minutes' of extra footage, they do not really add a great deal to the proceedings, but the second one offers a funny sequence with LL Cool JJ (which should have really made it to the final cut) and it is certainly nice to have them included here.

Recipes From Last Holiday offers us two recipes from the movie: how to make Poulet Tchoupitoulas and Bananas Foster. Both recipes are text-based, offering you a list of ingredients followed by several pages of instructions on how to put the mouth-watering dishes together.

Finally we get the Theatrical Trailer for the main movie as well as trailers for Elizabethtown (where Orlando Bloom is actually tolerable), Neil Young Live: Heart of Gold, the romantic comedy Failure to Launch, the female volleyball movie All You've Got and... the Oprah DVD collection (which comes with a free loaded shotgun and a book on how to assassinate irritating talk-show hosts without remorse).

Last Holiday is a cheesy, by-the-numbers comedy-romance, which just about holds together thanks to Queen Latifah. It's reasonably enjoyable if you really switch your brain off, but nothing particularly memorable. The video and audio are perfectly acceptable for the release and we get quite a few nice extras to entice fans of the film, who are sure to grab this up.