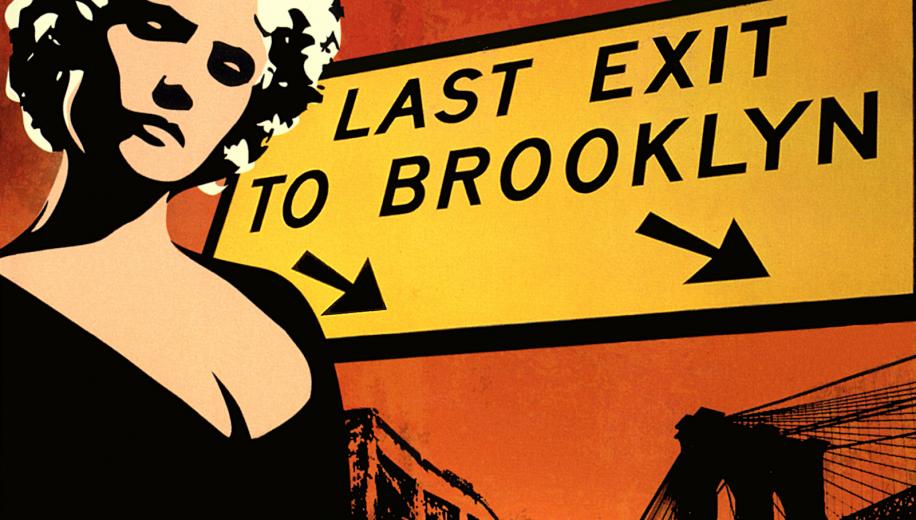 Selby's '78 novel may have made for a punishing visual nightmare in Aronofsky's 2000 adaptation - easily the best remembered of his adaptations - but his much earlier '64 collection of short stories was the subject of considerably controversy, even resulting in a now-farcical obscenity trial in the UK (when judges used to say things like "women might be embarrassed at having to read a book which dealt with homosexuality, prostitution, drug-taking and sexual perversion" when justifying all-male jurors) which took 2 years to successfully appeal.

Originally planned for a live-action adaptation by imaginative animator Ralph Bakshi (Fire & Ice, Cool World), with DeNiro interested in the lead (male) role, Last Exit to Brooklyn would suffer a series of failed attempts before it eventually landed in the hands of German Director Uli Edel - making his English-language debut here - a man who will probably always be tarnished by the fact that he went on to direct Body of Evidence. The adaptation would take all five of Selby's collected Short Stories and interweave them into one single narrative, but the outcome was still the same: a very sobering look at 50s America which, traditionally, had always been portrayed as having a celebrated and blissfully happy post-War landscape.

Jennifer Jason Leigh's prostitute Tralala enjoys running a scam with a local Brooklyn gang (headed up by Peter Dobson's Vinnie, but also including the likes of Stephen Baldwin and a very young Sam Rockwell), seducing soldiers from the nearby base into deserted locales so that they can get ripped off and beaten up by the hoodlums. Transgender hooker Georgette (Alexis Arquette) has her eyes set on Vinnie too, but mostly suffers ridicule from the gang and from her own family. And local worker Harry (Stephen Lang) has his eyes on Georgette, which may be the reason he can only really rape his wife, getting wrapped up in a Union battle which sees him spiral out of control when his boss (Jerry Orbach) hears news of what is going on. Also involved in the Union battle is Burt Young's Big Joe who is horrified to discover that his teen daughter (a very young Ricki Lake) is pregnant.

You can immediately tell Last Exit to Brooklyn is written by the guy behind Requiem for a Dream, and it's a rough ride, shot surprisingly well (there are some moody close-ups which are lensed impressively) and interlaced competently, despite the ostensibly separate Short Stories which were, originally, not really connected at all other than by locale. Jennifer Jason Leigh gets the toughest, meatiest part, and it's the kind of role that has defined her career; Lang is good but at times seems a little out of his depth, and even Burt Young takes a moment to get into the material, which tends to favour a more theatrical, borderline melodramatic, approach to displays of emotion. Nonetheless it's a solid little underrated gem, which will probably make an unexpectedly 'good' companion-piece to the 4K release of Requiem for a Dream later in the month.

Last Exit to Brooklyn comes to UK Blu-ray courtesy of Lionsgate, with a solid presentation that does a solid job with some pretty limited material, bringing the suitably period landscape to life.

The disc presents a 1080p/AVC-encoded image framed in the movie's original theatrical aspect ratio of 1.85:1 widescreen.

By all accounts the decade-old Blu-ray released by Summit Entertainment Stateside offered a pretty unimpressive presentation, so it's hard to believe that this is anywhere near the same transfer. Whilst there's no official announcement surrounding remastering, and whilst the image is far from perfect, this seems strikingly like a 'best you can do with this material' situation, as the presentation has some genuinely strong highs, and its softness only appears to be embedded in the source.

Detail on faces, clothing and bars is strong and suitably period in feel, with a firm but fine layer of grain lightly sitting atop the image, whilst the colour scheme plays to the period too, dressed down in sombre browns and greys, with little popping beyond lipstick and a couple of outfits, and everything restrained to the setting. Black levels are strong enough, and the softness appears part of the style and the source. It's nowhere near demo, and who knows whether a 4K restoration would pull more out of the print, but most fans will likely have to accept that this is as good as it gets, and that it really is good enough.

Last Exit to Brooklyn's Blu-ray release earns a solid DTS-HD Master Audio 5.1 track which, much like the video, won't knock your socks off, but is a decent effort nonetheless, particularly with some likely very limited source material.

Dialogue remains well-prioritised, coming across reasonably clearly and coherently throughout, largely disseminated across the fronts and centre channels, and only occasionally a little tinny around the edge, with background noises prevalent. The bustling bars, and noisy riots afford a little legitimate expansiveness, but it's all a little claustrophobically hectic, and borderline muffled; nonetheless the limited budget and source material probably go no further than this, and it's a decent enough effort nonetheless, with strong presentation of the score to round out the track.
﻿

Lionsgate's Blu-ray release of Last Exit to Brooklyn appears to go one better on the extras front too, with a decent selection that boasts some Deleted Scenes which don't appear to be listed on the US predecessor.

There's an Audio Commentary from the Director and also the Screenwriter, a Making-of Featurette and some pretty poor quality Deleted Scenes which mostly consist of extended scenes from the movie.

Last Exit to Brooklyn is one of the few adaptations of the bleak works of Hubert Selby, and it makes for a tough watch, certainly achieving what it - and the book - sets out to do, which is redress the unduly rose-tinted portrayal of post-War 50s America and reveal the dark underbelly beneath.

A solid little underrated gem, which will probably make an unexpectedly 'good' companion-piece to the 4K release of Requiem for a Dream later in the month

Lionsgate brings Last Exit to Brooklyn to UK Blu-ray almost a decade after its US bow, with a similar although not identical release, affording it solid enough video and audio and a decent selection of extra features. If you're eagerly anticipating revisiting Requiem for a Dream - at least as much as anybody can - then this should probably be on your radar too.