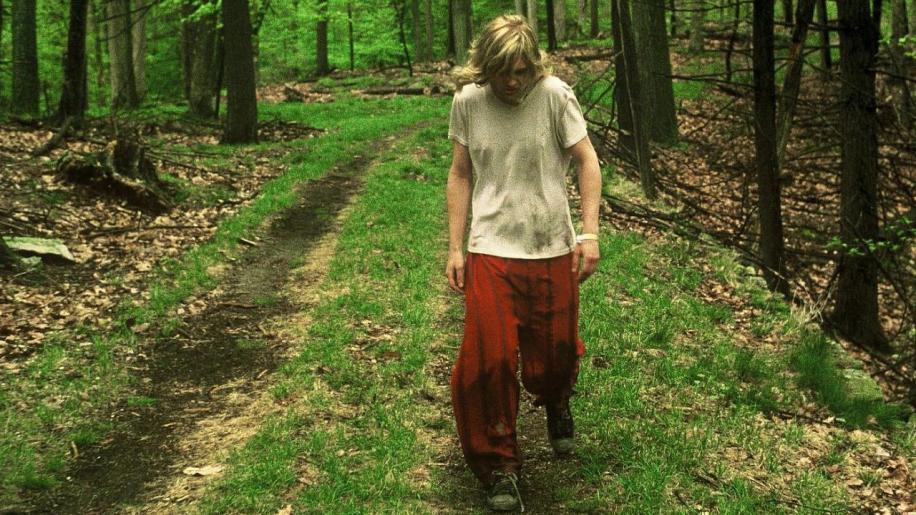 This disc is double sided and contains both the original theatrical release in Full Screen 4:3 and an anamorphic widescreen 1:85:1 version. There is very little difference technically between the two versions - the widescreen simply has more footage reinstated to the left and right of the 4:3 image. Even the widescreen version feels like a pan & scan in parts as there are scenes with the tops of actors' heads cut off etc., but this is presumably part of the quirky film-making style being used here. The technical quality of the image was not one of the best I have seen recently. There were noticeable print defects and dirt on the image in a couple of places. The image also had a low budget, muted feel to it with a dull palette and little detail. The duller tones suited the movie but the actual image quality could have been better in my opinion. Using the subtitles also revealed the odd glitch at the bottom left of the image - a small horizontal line would appear intermittently when the subtitles were enabled although this may be covered by most TV's over scanning. This release has a Dolby Digital 5.1 soundtrack although you wouldn't really know it. There was hardly any noticeable difference between the English DD5.1 and DD2.0 soundtracks as most of the sound comes from the front channels. As mentioned in the review, there is hardly any dialogue and nothing to really push your system. The scenes containing music were well reproduced, but the mumbling, ramblings of Blake were hard to pick out and I had to resort to using the subtitles in parts. The extras on this disc are as follows :

The Making Of Gus Van Sant's Last Days (20m14s). This is a standard behind the scenes documentary with interviews with cast and crew. I watched this with interest as I wanted to try and gain a better understanding of what the last 96 minutes was actually trying to say. I was pleased to discover that at least those involved did see this as film experimentation and that it was more art than film. That had been my interpretation whilst watching the film but I was worried that I was missing something that everyone else could see!

The Long Dolly Shot (8m41s). This shows the technical aspects of making one of the more powerful scenes in the movie where Blake loses himself in his music. The shot was taken from outside the window and the camera is moved away on the dolly - it obviously was more difficult than it sounds as it took many, many takes to get it right. There is also another extra about this same shot, although this time it is a deleted scene (8m05s) this time taken from above Blake's head as he performs the music piece. One for serious fans only.

There is also a music video of “Happy Song” by Pagoda. You cannot sit on the fence after watching Last Days so although I've tried to read a lot into it and praise Gus Van Sant for trying something different, I must also say that I didn't enjoy it. There is a much bigger argument about cinema as an art form but ultimately I watch a movie for escapism and entertainment - the presentation method used here and the lack of any structure or story did not appeal to me I'm afraid.