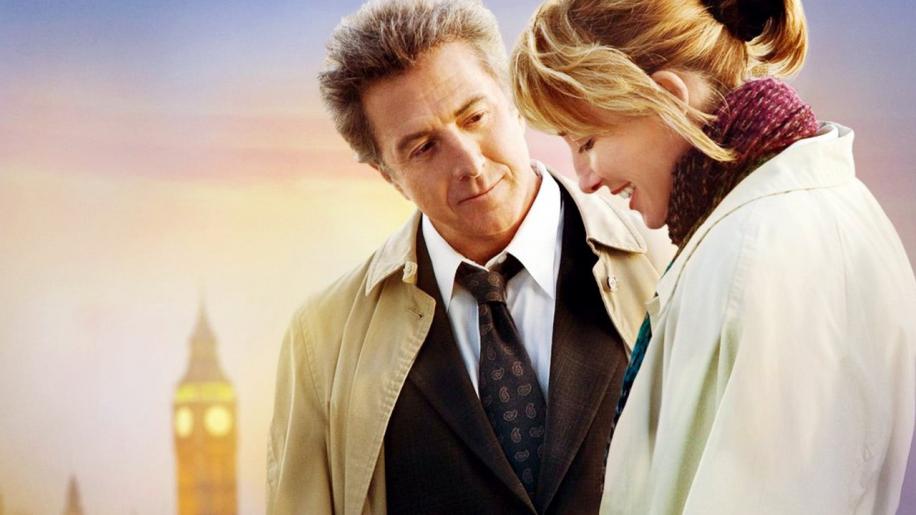 Many people may not have heard of 'Last Chance Harvey' as it came and went in the UK Cinemas almost unnoticed in the early part of 2009. It seems very strange as a movie with a cast including Dustin Hoffman, Emma Thompson, Eileen Atkins, James Brolin and Kathy Baker should have attracted much more attention than it did. I missed it at the Cinema, so I was very happy to have the chance to see it on Blu-ray so soon after its theatrical release.
After having watched the movie, Directed by Joel Hopkins (Jump Tomorrow), I'm still puzzled by its lack of apparent appeal as it's a good, simple, well made picture. Could it be, perhaps, that its story has a similar theme to other films that the stars have made before or could it be, even, the fact that it's a love story that put people off? Could it be the age difference between Hoffman and Thompson that made a love story seem implausible or maybe appear distasteful?
I know the reason that I wanted to see the movie was because here we had two stars at the top of their tree, capable of turning in excellent performances that could be considered master classes in the skill of acting - and if anyone could pull this story off then they could.
As I settled down to watch it, I was looking for answers to my questions.

This is the story of Harvey Shine (Dustin Hoffman), an ageing divorced New York jingle writer who's finding it hard to pull in the business for his agency (shades of 'Kramer vs. Kramer'?) so he's pretty much on his last chance with them to the point where his boss tells him to stay and enjoy London for a while as he's going to be there for his daughter's wedding. The aim here is to keep him out of the way in case he does anything to jeopardise a big account.
On arriving at Heathrow, he has his first meeting with airline employee Kate Walker (Emma Thompson) as she attempts to get him to take part in a survey, but he's in too much of a rush.
Harvey attends the wedding rehearsal party being hosted by his daughter Susan's parents-in-law and Hoffman looks comical in his brand new suit, complete with security tag on the sleeve, like a fish out of water. He's had little to do with Susan over the years and Brian (James Brolin) has been more of a father to her than he has.
He discovers his agency is having the meeting with the all important client on the wedding day, so rearranges his schedule to be there on time but somehow manages to miss the plane and his boss tells him they're letting him go.
A despondent Harvey retires to the bar where he has an 'I've had a worse day than you' competition with Kate, who's on her lunch break and who would just like to read her novel if only some annoying American would leave her alone.
Eventually, a stilted relationship flourishes against the backdrop of the city of London and we learn more about the two main characters as they reveal their past.
Hoffman excels at displaying the charm gained by experience of life while Ms Thompson grudgingly warms to her new shadow. She's cautious about becoming involved with a man as her previous experiences have always led to disappointment - and nobody does disappointment like our Emm.

To say that this is a wonderful two hander would be to ignore the part played by London as the third character in this romantic tale, with its cityscape vistas that lend the story a modern day setting and a reality that helps the not too sugary sweet story gain credibility.
Harvey now has the opportunity to be at his daughter's wedding, but feels awkward about going as he feels unwelcome. Kate persuades him and eventually Harvey agrees as long as she will accompany him. Naturally she has nothing to wear so she at least gets a new frock out of the deal.
Arriving at the Wedding reception, Harvey interrupts the father in law (James Brolin) to make a speech as father of the bride and the whole audience thinks he's about to embarrass himself in public, but what follows is a very touching address with Hoffman skilfully tugging at every heartstring in the cinema. Not a dry eye in the house. He proves beyond doubt that he still hasn't lost the ability that he had in the 1980's.
Kate sees him happy and plans to steal way, considering her job done and not wanting to get in the way, but she's interrupted by a piano playing Harvey who makes it clear he wants her to stick around.
The pair arrange a meeting which seems to allay Kate's fear of disappointment and lifts her spirits. Maybe love does find a way if you wait long enough.
The path of true love never runs smoothly though, as Harvey has an attack of Arrhythmia (a heart flutter) so is admitted to hospital and misses their meeting - with Kate being stood up and thinking that nothing has changed for her.
So, is it the end for this odd couple? You'll need to watch it to find out.

This is a very enjoyable film, which no doubt will be branded a 'chick flick' by those who are so insecure in their own sexuality as to be unable to deal openly with affairs of the heart, but those of us with the maturity to do so will find it a gently rewarding experience. At the time of its release, critics said that it was a 'nice' film and that is probably the most damning accolade of all time. How dare something be 'nice' nowadays?
It's a film with beautiful cinematography of the London landscape by John De Borman, a very enjoyable score by Dickon Hinchcliffe that doesn't attempt to be the star of the movie and sensitive direction by Joel Hopkins who keeps a careful eye on the syrup content in the final baked cake. Eileen Atkins performs a wonderful comedy turn as Kate's Mother who is convinced that her Polish neighbour is a mad axe murderer - often seen carrying torso shaped packages into his garden shed.
Above all, it actually is a 'nice' story, full of hope that doesn't pretend to be anything it's not. Some may say that it's predictable, but I'd call it straightforward storytelling with a beginning, middle and end.

Every so often, in Hollywood, some prankster takes the script of 'Casablanca' (perhaps the greatest love story of all time) and changes the names of the characters, locations etc then punts it around all the agents and waits for the feedback. What they get back usually involves comments like 'not enough car chases' or 'where are the gun battles on the street?'
Bearing that in mind, maybe I'm not really so puzzled as to why 'Last Chance Harvey' didn't do so well at the cinemas but at least Blu-ray gives us the chance to see good movies that don't quite achieve the commercial success of a noisy blockbuster with a quality that rivals a theatrical presentation and the added benefit of not having someone rustle popcorn in your ear.
Take a chance on 'Last Chance Harvey'.