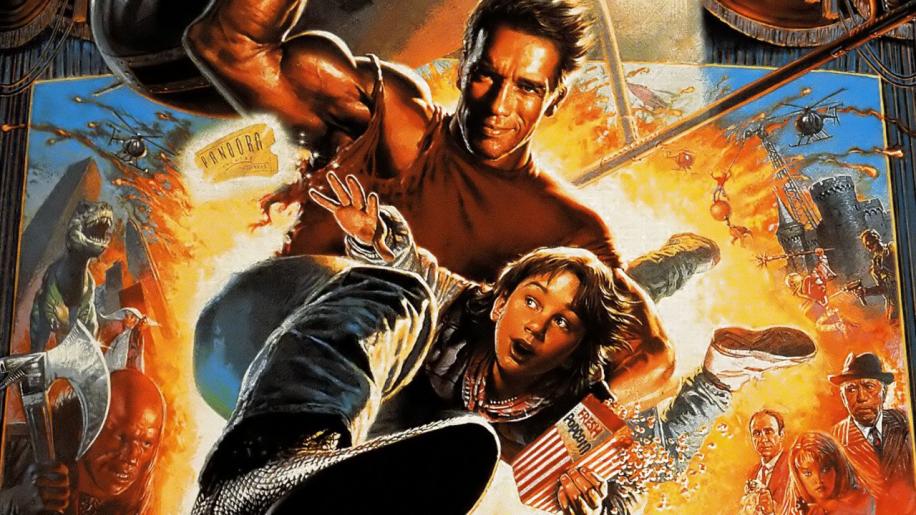 Arnold Schwarzenegger is Jack Slater an indestructible movie cop with all the right clichés. The thing is he only exists in the movie world and always wins the day. A young boy called Danny knows each of the three Jack Slater movies inside out and as a special treat he is given a magic gold ticket to see the 4th movie before its release. As Danny sits in the theatre on his own enjoying the film he is quite literally sucked into the movie. Now in the movie world Danny helps Jack track down the bad guy, but in a twist of fate the bad guy gets the magic ticket and enters the real world where the bad guy can win. Jack and Danny must follow him and save the day, but Jacks clichés and powers don't really work in the real world, punching things hurt for example. Can the two unlikely heroes save the day?

I can't help but like this movie. Yes it was a box office flop, yes the acting is bad, but is that not the point? The movie is a complete parody of Schwarzenegger and the action movie business in general, and it works on many levels. Yes it does start to wear thin towards the end of the movie, but it certainly was brave of Schwarzenegger to take such a fun view of him, and there are some genuine moments of comic genius on show, but there are also many points against the film in general. The movie however is a real Home Cinema treat; it has action on tap with over the top set pieces, explosions, car chases and over the top acting. A fun ride for the first ¾ of the movie with a lame ending, but great fun none the less.

This superbit title is only available at this time in Japan, where there are also some other surprising titles available. While Jurassic Park is a Universal title everywhere else, Columbia have the Japanese rights and have released it as a superbit title, which we hope to test very soon for you all along with some other exclusive Japanese superbit titles, thanks to CD Japan.