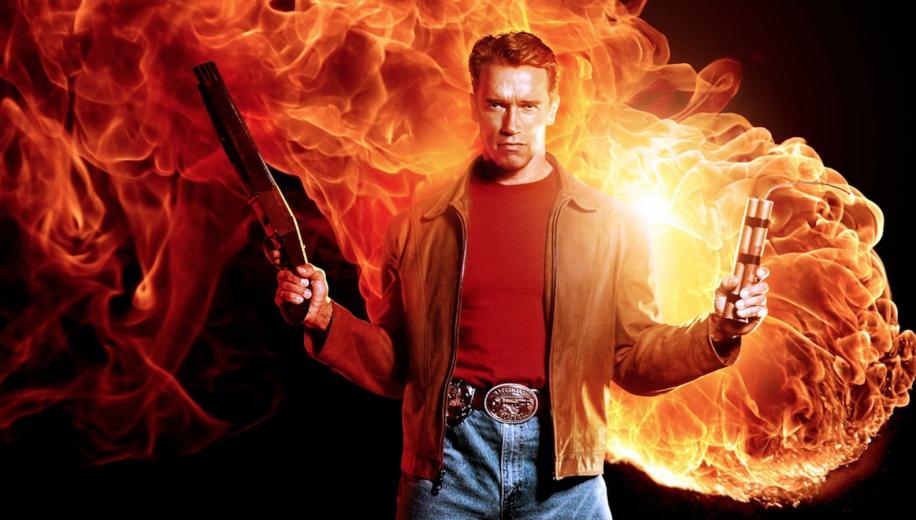 Intended to be an action parody of classic Arnie flicks - and, perhaps ironically, Shane Black action films - Last Action Hero was beset by bad fortune, epitomising its own Wrong Place, Wrong Time cliche by landing in cinemas within days of Jurassic Park, and ending up unsurprisingly utterly buried. But it wasn't all bad luck. McTiernan would say it was largely hobbled by a rushed post-production process to desperately meet a release date which should have been delayed for a multitude of reasons. Since Black didn't write the original script, he could always argue that the original idea was unfixable, whilst the original screenwriters could argue that Black's almost completely reworked vision was flawed. Everybody had a get out of jail free card, but none of it stopped Last Action Hero from tanking completely.

... Arnie would ultimately do far better having knowing fun on a grand scale in Cameron's True Lies the following year

The idea had some teen kid getting magically sucked into a movie, where he gets to spend time with Arnie's invincible on-screen character, Jack Slater, only for the movie's villain to find a way out of the screen, forcing Slater to follow him and thus land hard when faced with the less forgiving real world. It's actually not the worst premise, but, like pretty-much everything in the movie, something's often off. For starters, the screenwriters (both the original writers and their replacement, Black) had opposing views on where the film should be set - predominantly the movie universe or predominantly the real world - and the result is that they spend too long in both and not enough time in either.

The movie universe is full of in-jokes, meta humour and some frequently excellent ideas, and Arnie commendably utterly committed to sending up his own action persona, whilst Charles Dance bides his time whilst waiting to steal the movie when it shifts to the real world. After a protracted period of surreal OTT shenanigans, the movie then lands in the real world to take on the familiar fish-out-of-water format, with Dance whipping up a storm as the devilish antagonist whilst Arnie struggles with real-world issues like... having to reload.

McTiernan was arguably a great choice to direct this kind of movie because he absolutely knew his way around the movies he was trying to send up here, and Black was theoretically a great writer for it, but unfortunately it wasn't really to be, with Black a way off perfecting his brand of self-parody (he was better at buddy-buddy action-comedy-thrills a la Lethal Weapon, Last Boy Scout and Long Kiss Goodnight, originally, but would eventually nail the self-aware near-parody blend in Kiss Kiss, Bang Bang). Perhaps the film was mismarketed, badly edited, rushed to release, and trapped in the shadow of Arnie's action icon status - with the seminal Terminator 2 still fresh in audiences' minds - and perhaps it also struggled from a lack of identity, with the writers arguing, or possibly not even knowing, what this was really trying to be. It's not a kids' movie (earning a surprising 15 rating in the UK), but it frequently feels like it should be. Arnie would ultimately do far better having knowing fun on a grand scale in Cameron's True Lies the following year, a film which knew exactly what it wanted to be and got the blend just right.

Last Action Hero comes to UK 4K Ultra HD Blu-ray courtesy of Sony Pictures Home Entertainment, who serve up what looks to be the exact same disc as is being launched Stateside. This Ultra HD Blu-ray release boasts another impressive native 4K image.

Despite being a blockbuster action movie which sends up big blockbuster action movies, Last Action Hero is a frequently quite visually lacklustre affair, with a few surprisingly low key settings and pastel tones, and only a few instances of striking pop - notably when they send up Hamlet, although the spot colour effects in that particular monochrome sequence don't comfortably translate to 4K HDR. Really though, despite the original style, or frequent lack thereof (the opening and closing scenes notwithstanding), Last Action Hero has simply never looked this good.

Detail is excellent, really lapping up the skin textures, clothing and background nuances, showcasing impressive texture and depth, and bringing the multitude of LA - and NY - settings to life. There's little softness here (a couple of early shots perhaps, including a horrific optical zoom when the ticket is handed over), but it really is a very respectful and noteworthy upgrade, and the image retains a wonderful filmic look courtesy of a fine sheen of natural grain.

HDR and WCG have moments to shine, although it's not a movie rich with vibrance, instead affording Arnie's T-shirt a deeper red, explosions considerably better blooming yellows and oranges, and other such instances of brief pop. Dance's eyeballs, and the spot colours in the monochrome Hamlet scene - which have their own issues - and a few other flourishes stand out, but for the most part there's an overall added level of richness to the entire palette, with inky black levels affording the perfect backdrop to the entire production. It is perhaps not obvious demo quality, with little here coming across as absolutely spectacular, but that doesn't stop this being a glorious presentation of this particular film.

... laps up the over-the-top hijinks

Dialogue gets keen prioritisation throughout, taking precedence across the frontal array, whilst the pervasive and purposefully invasive score thrums along with intensity and gives the channels plenty of fuel for the fire, but it's the effects which stand out, from the defining boom of Arnie's signature Desert Eagle, to the various explosions, automatic weapons fire, and excessive car chases that populate the piece. There are some fun practical stunts, with helicopters, exterior elevators and cranes, and the audio track is boisterous as all hell, intentionally over-the-top, and perfectly married to the film.

Sony's 4K release enjoys a number of extra features all of which make it over to the 4K disc itself.

There's a decent enough, if a little dry, Director's Commentary headlining the assortment, as well as an archival EPK Making-Of Featurette, whilst the Deleted and Alternate Scenes are mildly diverting one-watch curios, with the package rounded off by a Music Video and Trailer.

Last Action Hero is frequently - and possibly inexplicably - much more fun than it gets credit for, but also ultimately much worse than it really should have been considering the writer/director/star trifecta that put it together. It's neither some kind of underappreciated gem, nor is it at all a bad movie, and if you can let go of any expectations whatsoever you'll probably find it pretty entertaining.

... more fun that in gets credit for, but also worse than it should have been

Sony's UK 4K release of Last Action Hero boasts an excellent native 4K image and a superb Atmos track, as well as a few nice extras ported over to the 4K disc proper, leaving it a very strong package for fans to pick up.