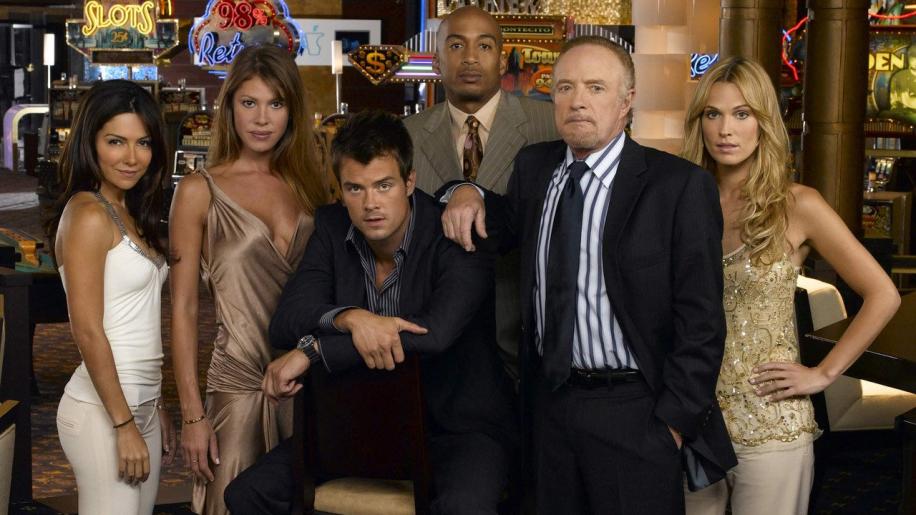 Las Vegas is presented in a suitably glossy 1.78:1 aspect ratio anamorphically enhanced widescreen transfer. The detail is very good, particularly on the longer shots and on the tanned glistening beauties that populate this drama. There is a little edge enhancement, but it is never a problem and there is no noticeable grain to worry about. The colour scheme is broad, rich and luscious, with deep and solid blacks - perfect for the bright night lights of Las Vegas. As TV show presentations go, it is pretty good but not exceptional. Since almost every episode takes place within the confines of the Montecito casino, the visual variance is sometimes limited, but at least this means that it is of a consistently good standard. To top off a decent transfer we get superb audio treatment - an exceptional Dolby Digital 5.1 track that keeps you occupied throughout, engaging you in the snazzy, jazzy Las Vegas scene with a verve you seldom come across in TV shows. The dialogue is always clear and coherent, presented from the frontal array, but it is the score that really keeps your room buzzing, with artists like Duran Duran, REM, the Black Eyed Peas and The Polyphonic Spree (many of whom actually appearing in the show) providing both new and familiar material, as well as a constant instrumental beat when the music tracks are not being utilised. The soundtrack offers up some great surround use and even a little bass and there are plenty of effects - slot machine ringing, sirens, traffic noises etc. - to engage you from every angle. It is a well observed, acutely directional offering that is one of the best TV show audio presentations that I have ever come across. There are only two extra features over the entire season, both on the final disc. First up there is a Gag Reel which runs at fourteen minutes and comprises bloopers from both the first and second seasons. From the first season, there are a few funny moments, including silly faces, plenty of line fluffs and dozens of swear worlds - and featuring a lot of great bits with Alec Baldwin having a laugh. The second season only has about five minutes of goofs, with Snoop Dogg the source of much hilarity, Alec Baldwin having a few more problems and a ludicrous amount of line fluffs from the cast. Both the reels represent some of the best and most entertaining outtake footage I have ever come across.

Next we get a featurette entitled VIP Access Only, where a Palms 'High Roller' executive (Greg Sheets) takes you on an eight minute purportedly tell-all tour of everything they do to cater to their high-roller clientele. This guy is no James Caan and the real footage is nowhere near as glamorous as the fictional series (although some of the presidential suites do look pretty special) and there is basically nothing to learn here that you probably don't pick up from just watching the show. Las Vegas is a glitzy, glamorous show, with consistently innovative storylines considering the limitations of a series revolving around a Las Vegas casino. All of the gorgeous girls and glamour we have come to expect from the first season are present and correct here, along with the big name guest stars - a familiar face in almost every single episode - and a couple of more serious storylines. Aside from that it is business as normal and you know what they say - if it ain't broke, don't fix it. The video presentation is very solid, but the sound presentation is exceptional, only leaving the fairly thin extras to disappoint marginally (even though the outtakes are quite good). Overall, if you like Las Vegas, this is a great second season to pick up. If you haven't experienced it before, then once again it's probably worth picking up the first season cheap before splashing out on this one.