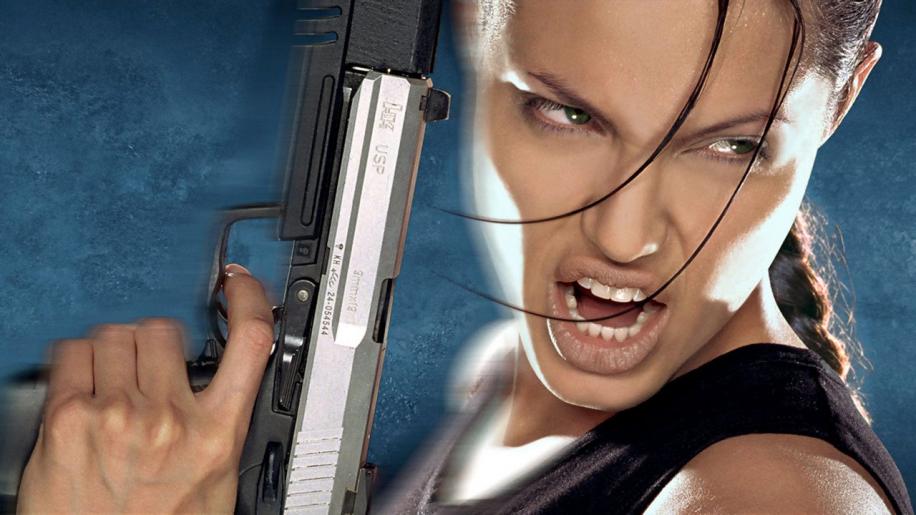 Tomb Raider, the game that loaded a thousand Playstations and gave equally as many schoolboys a sexy heroine to play with, well, at least in the confines of the game anyway. Such was the popularity of Lara Croft, the aforementioned heroine, that numerous so-called “celebrities” have encapsulated her image as part of a marketing machine. Obviously, after the successes of 4 games, the powers that be green lit a movie based on said character. Now, all the micro celebrities that have portrayed her aren't good enough to be on the big screen, so they needed someone who could portray her as well as being able to actually act. Enter Angelina Jolie, a rising star with an Oscar to her name, gorgeous looks (we are talking Esquire and FHM's “sexiest woman 2005” here) and someone who actually looks right for the role, well, except for the over-the-top pneumatic chest. So, what's the story?Lara Croft: Tomb Raider focuses on the alignment of the planets, which happens incredibly rarely. At the beginning of this alignment, a clock in the Croft Mansion starts to tick, having never ticked before (spooky eh?). The relevance of the clock and the treasure if holds becomes clearer later, after Lara finds a letter from her dearly departed father (Voight) which elaborates that this item is the key to finding two halves of an ancient triangle (no, not the type that goes “ting”), which when combined would give the person possessing the triangle the ability to control time (I'm really not making this up). Of course Lara isn't the only person after the triangle and no, it's not the school orchestra either. It is in fact a society known as the “Illuminati”, who obviously want the triangle for their own nefarious reasons. Can Lara get hold of the two segments? Will the Illuminati triumph? Will the makeup person conceal all the tattoos present effectively?Well everyone automatically starts ripping into this by suggesting it's nothing more than an “Indiana Jones” rip-off, but let's be honest here shall we, Indiana Jones is nothing but a rip-off of Allan Quatermain and I'm not referring to the movie, rather the books by H.Rider Haggard back in 1885. So now we've accepted that a proverbial “Tomb Raider” or treasure hunter isn't anything new and that the movie was inspired by a computer game as well, we know we're in a tried and tested genre. Does this offer anything new? Well other than a heroine as a main character, not really. The set pieces are nicely done; the movie travels at a fair old rate and only has one or two truly slow moments. Yes the script is a tad clichéd but then as we're talking main stream cinema here, let's not be overly harsh, especially as you look at the source material - Did computer games of 10 years ago have coherent, realistic storylines? Generally no, so this pretty much follows suit, with the narrative there to get us from set-piece to set-piece. So yes, weak plot and story, but then this isn't meant to be a deep intellectual movie, it's supposed to be a rollercoaster ride with eye candy and it fills that description quite nicely, with the former having nice set pieces of action during the first two acts mostly and the latter supplied with the divine form of Ms. Jolie. This is certainly a no-brainer but it is fun and entertaining for the most part and let's face it, that's not a bad thing.So, with one movie under their belt and a decent box-office take, can they do the same again? Will the storyline be deeper? Finally and more importantly, can they make a padded bra that looks believable? Well no to the last one, but thankfully they've done away with it.Tomb Raider 2, or it's full title, Tomb Raider The Cradle of Life, is yet again another adventure for Lara (and her not quite as pneumatic chest), this time revolving around, gasp, the Pandora's Box, which resides at a place called the Cradle of Life (the title makes sense at least). Of course, the adventure of finding said box (which could wreak death upon the world if opened) wouldn't be exciting if there weren't a villain in the wings, wanting to get hold of the box for their own evil purposes and lo, we have one in the shape of Dr. Jonathan Reiss (Hinds), who wants the box to sell as a weapon to the highest bidder. Cue adventures, comrades of questionable integrity and escapades galore as good and evil race for the secrets of the dark magic box.So, a sequel, although if Jolie keeps her word, it'll be the only one and that's not a bad thing. This is not a bad movie; in fact it's arguably better than the first, with at least a better plot and better dynamics with the cast as we've been there before. Jolie, yet again, is spot on as Lara - realistically could you imagine anyone else not only playing the part, but performing all the stunt work? Me neither and ultimately this is her movie, although she still has to surpass her finest work in the critically acclaimed “Gia”. Everyone else from Hinds to Barrie is perfectly fine, with nobody particularly poor or standing out. Bearing in mind that Jan de Bont directed this movie, it is arguably his best one since “Speed” with good visual flair compared to some other movies (cough Twister) and capturing some stunning scenery towards the final act. The set pieces here are definitely better than the original, raising the bar substantially from that movie, although punching the shark on the nose still makes me laugh no matter how hard I try not to. Still I like this movie, not just from some of the best eye candy perspective, but because it's just pure escapism.