Land of the Lost Movie Review 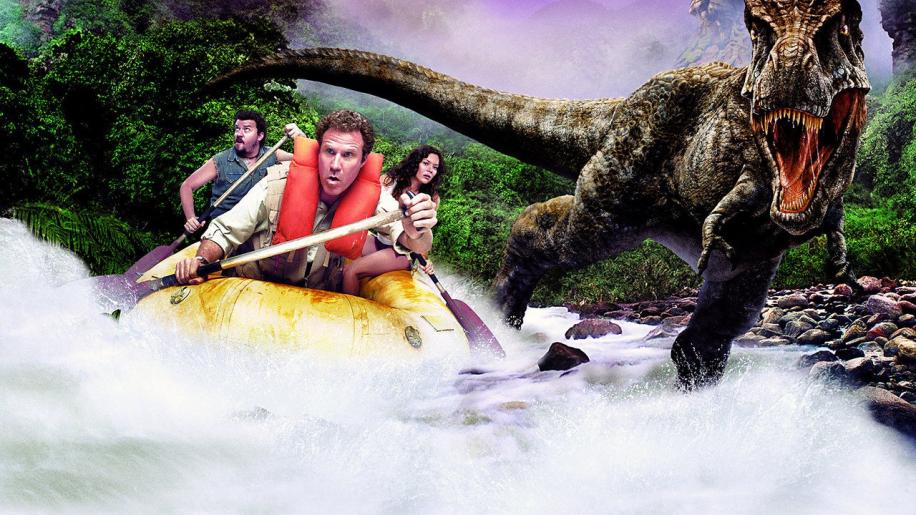 Well, as the saying goes, you can't judge a book by its cover, and the same may be true of many similar items. Yet when it comes to films available to the home formats, I've long held the opinion that you can and should, with the sure-fire giveaway being that a prominent quote from a source you've never heard of is tantamount to a sticker saying “soon to be in the bargain bin”. As such, I was a little dismayed to see the cover of the latest Will Ferrell comedy Land of the Lost emblazoned with the line “laugh out loud funny” from the Minneapolis Star Tribune. Far be it from me to cast aspersions against what could be a fine newspaper, but when quotations from more notable sources are not forthcoming alarm bells ring as you know this is likely the best praise they could find and they might have had to search long and hard to find it. Still, I'm a big fan of Ferrell's style of absurdist comedy, so I figured I'd give it a whirl. I often find myself liking the stinkiest of comedies so long as the lead actor is one that consistently makes me laugh.

Land of the Lost is a loosely updated version of the seventies kids television show of the same title, which revolved around a father and his two children's adventures in a strange world which they fell into over an inexplicably warp like waterfall. This modern partial retelling is brought to us by director Brad Silberling. Hardly a household name, but his work helming the family fantasy adventure Lemony Snicket's A Series of Unfortunate Events starring Jim Carrey probably has him on the radar of some people. Like the aforementioned title, this film is squarely in the mould of the outlandish and fantastical. It tells the story of Dr Rick Marshall (Ferrell), a palaeontologist with some radical theories. We are introduced to him by way of US TV journalist Matt Lauer's NBC programme The Today Show. Here he gives what appears to be a regular book plugging appearance for his latest work entitled “My Other Car is a Time Machine”, with Marshall shown as a caricature of the intelligentsia, complete with neckerchief, poncy little beard and an ornate pipe which he is not allowed to smoke. Soon though the light hearted whimsy of this promotional appearance takes an unexpected turn as the nature of the Dr's theories take centre stage, much to the mockery of Lauer. Marshall's outlandish notions of an answer to the current energy crisis being found in the potential to harness trans-dimensional energy, coupled with the fact that he's “wasted” $50 million following these crackpot theories, soon leads to a quote of derision by Stephen Hawking and an irate Marshall leaping at this interviewer in a fit of childish rage.

Cut to three years later and the Dr is now a washed up has-been teaching school children science, though it appears not very successfully as one child asks whether dinosaurs had boobs. Clearly not all is well with the esteemed visionary. No sooner has this premise been established than into the classroom walks a young lady, Holly Cantrell (played by Anna Friel). She it seems has been an avid follower of Marshall's theories and is keen to rekindle his passion for scientific discovery and follow his beliefs to their conclusion. There's the usual washed up clichés of the protagonist pushing the young protégé away, claiming to be past it and a joke, but once these script necessities have been dealt with the film proper can start. There's some faux science thrown around and an invention created during a mammoth eating session called the tachyon amplifier, but all that is really needed from these scenes is a means through which we can travel to another dimension and let the supposed adventure start.

By this point most will know if the jokes are going to be to their tastes, with Ferrell's staccato fashion of line delivery being already evident. If his presence isn't enough, then many, myself included, will see it as good fortune that we are soon introduced to the character of Will Stanton, played by Danny McBride whose comic performance as Red in Pineapple Express just about stole the film. Sadly it soon becomes apparent that something is amiss. Some of the lines seem almost too tailor made to the previous personas that these actors have inhabited that here they feel crowbarred in. It is easy to identify the script as a weak link in these early stages as the performers struggle to raise a smile with run of the mill jokes that vacillate between the absurd and the telegraphed variety. Trepidation over what the rest of the film will be like is allayed to some extent as we travel across dimensions and times to a place that is just about weird enough to allow for any possibility. Surely here some sort of hilarity can ensue? In a word, no.

There are many flaws with Land of the Lost, the largest being that it simply isn't terribly funny. There will be moments when you might smile a touch, but to have two great comic actors going through the motions with such hackneyed fare is almost criminal. The problem seems to lie in that it is simply too weird for anyone with no memory of the television show upon which it is based. By shifting to another dimension where just about anything could happen, there is no grounding for the comedy. Like an episode of Lost it is somehow stuck in the mire of allowing the writers to throw any problem and solution they choose into the mix without any form of logic being applicable. The best family adventure films have always stayed within the realms of what might actually happen. They take an incredible premise and apply the theory of what might then occur were this in fact placed within our reality. Land of the Lost therefore lacks the true adventure of a classic family romp, but it also misses the mark of science fiction comedy because of its sheer outlandish nature. No single idea is taken to an interesting, thrilling or unfortunately funny conclusion because of the pinball plot which bounds from pillar to post with whiplash speed. Without the crux of nostalgia being invoked by memories of the characters and locations upon which this takes its inspiration, the experience proves itself rather hollow.

What we are left with is a script filled with small moments that indicate that they should be considered funny, yet feel strangely empty. The acting talent on show is woefully wasted, with Friel quickly changing outfit to resemble a more proportionally accurate Lara Croft. Ferrell and McBride do their best but the pomposity of Marshall seems completely alien to his character's standing as a scientist and due to this never being truly established, as it has always been necessary in such Ferrell films, the ridiculousness of his actions fail to resonate with any hilarious consequences. It falls into CGI dinosaur slapstick that may keep a child with a high boredom threshold glued to the screen but will likely simply prove to be more of a chore for the rest of the family. To say that this is a missed opportunity would be an understatement. Given this would inevitably be marketed at an international audience I had assumed there would be some kind of concessions made, possibly shifting slightly so as to perhaps poke fun at period fare such as the many McClure films based on similarly incredulous scenarios. It puts in just enough mildly adult material to potentially masquerade amongst the plethora of better Will Ferrell comedies and a similar amount of child like high jinks to be seen as a possible family movie. The trouble is that it fails as a comedy in either category. If you are a fan of the original kids adventure show then you may find something of worth in here, if not then consider this one to approach with lowered expectations.