Land Of The Dead DVD Review 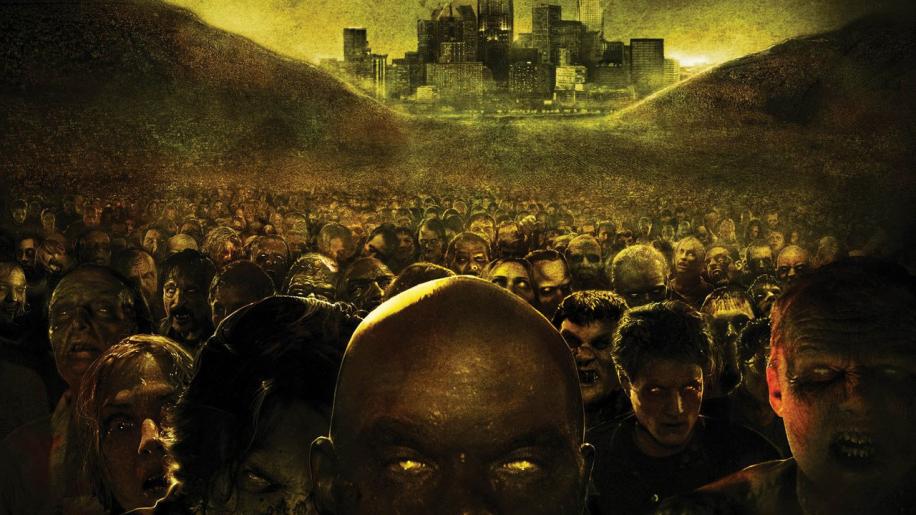 With a theatrically correct 2.35:1 ratio, presented in anamorphically, this isn't a bad transfer. Colours are spot on with some particularly vivid blood-reds, particularly in the “feeding-room” scene, where red is shown in abundance, covering the majority of the image and yet it doesn't bleed (no pun) into the other colours, showing how sharp the transfer can be in this regard. Flesh tones again are natural looking with some good detail in places, but not consistently throughout the movie, although as a lot of the movie happens at night, the black levels and detail is superb here. Print wise, it is pristine and I noticed no traces of dust or scratches, but then I shouldn't really, as this is a new movie and we are all well aware of DVD transfers, meaning that they should strive to make current movies look exceptional. Overall nothing really bad to say about this movie transfer.

Sonically, this isn't too bad, with loud musical cues as per every other horror movie out there, designed to raise tension and make you jump. Dialogue I found a tad quiet in comparison to the front speakers and LFE is used sparingly, but effectively, mostly in the earlier moments of the movie and during the finale/action sequences. Sound design is particularly good, with plenty of nice squelchy sounds for blood and limbs, just to make it sound slightly OTT in realism terms. Surround speakers were personally a little lifeless for me, with them only really being engaged for certain scenes, or certainly, they made little impact for me during my two viewings. DTS vs. Dolby? Personally, other than a slightly better sounding bass level and I do mean slight, there's nothing to choose between the two.

Undead Again: The Making of Land Of The Dead runs for 13 minutes and you can pretty much guess what you get. A sort of standard EPK for the movie, but I have to say George doesn't come across as a particularly egocentric person, more a normal, down-to-earth person, although I have to say his glasses are the other thing that can be seen from space after the Great Wall.A Day With The Living Dead is not about my experiences during rush hour on the tube, although it does feel it constantly. It runs for 7 and a half minutes and is Leguizamo talking and taking us around the sets, meeting the cast and crew etc. It's averagely entertaining, but if like me, you can't stand Leguizamo, avoid.

Bringing The Dead To Life is a 9 minute featurette relating to the effects work revolving around the zombies. You see how certain death sequences or effects are made, but in all honesty, unless you're a gore hound or you have an interest in FX, this isn't for most people.

The Remaining Bits is a three minute collection of trimmed scenes, I'd call them deleted but some last mere seconds. It's obvious these were trimmed as they didn't offer anything to the story, as opposed to running time (96 mins is considerably shorter than Dawn was!). Nothing exciting here either.

When Shaun Met George is a throwaway item, literally relating how Simon Pegg and Edgar Wright, the brains behind Shaun Of The Dead, ended up with a cameo in Land Of The Dead, from leaving at Heathrow, to meeting George, getting made up as zombies and that's basically it. It runs for 13 minutes and again, George appears as a real regular guy and not a Hollywood primadonna that so many others come across as.

Scenes of Carnage is a 2 minute video of sorts, showing some of the more grisly scenes, set to a classical piece of music. Yeah....ok.....

Zombie Effects:From Green Screen to Finished Scene is a 2 minute feature showing where some of the green screen effects were employed, which to be fair, some were noticeable, such as the zombie shooting gallery or the skyline from the tower, others weren't, for example when you see Riley enter the slum area near the beginning.

We then finish with the storyboard comparisons and the zombie casting call, which is just bizarre and quite sad. The only other extra is the commentary track, which I've not listened to due to time constraints, but if Romero talks as he appears in the other featurettes, it should definitely be well worth a listen.

I have to say I'm disappointed as this wasn't quite the movie or logical progression that I thought it would be. I'm not suggesting for a second that we have turbo zombies, but in a sense, after we've seen zombies running, ones that are rather slow seem less of a threat if you can walk at a brisk pace. Ignoring that point, mostly due to it not falling into the Romero world of zombie-dom, the political statement that is usually made isn't made with such gusto or indeed acute observations as, obviously, Dawn of the Dead. However, it's shortcomings don't make this a terrible film, just a disappointment, but who knows, George may get another crack and I'll certainly be looking forward to it, if he does.