Lady in the Water Movie Review 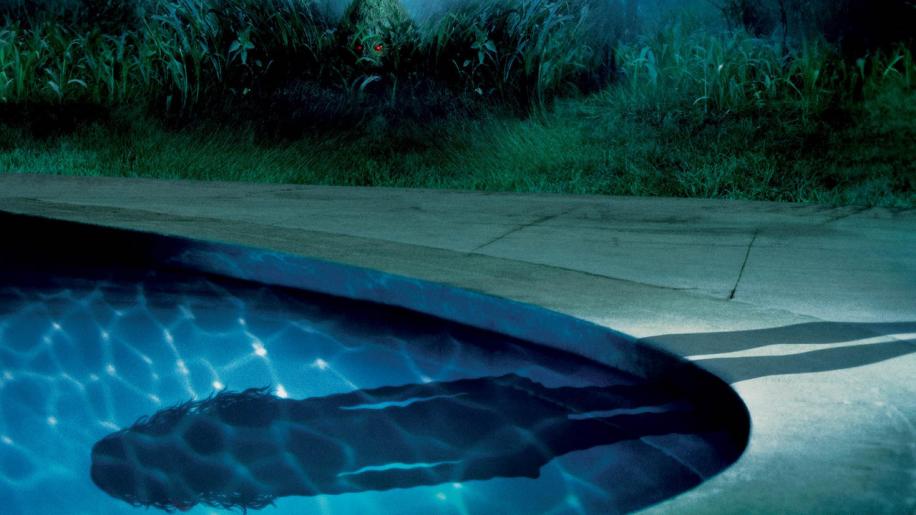 Cross genre movies. When done correctly an whole new experience can be gained, the horror comedy, the romantic thriller, the supernatural musical, each bringing its own and unique take. However, when done wrong there is also a whole new experience, this one, though, is rather less then savoury. Either the subgenres don't gel or get mixed up; the horror is funny for example. When at its worst there is no defining genre to hold the film together, instead the direction is a meandering mess of mishaps and misfortune. M. Night Shyamalan has, for all his films, skirted this very idea. Mixing genres creating something new, fresh and unique.... sort of. The validity of that statement can be discussed at another time. For now let us take a look at tonight's feature The Lady in the Water. Based on a bedtime story, a fairytale, if you will, that Shyamalan told his daughters when they were younger. When existing as a fable, perhaps it works well, because when seen on the big screen something isn't quite right. There are a number of issues, the biggest of which is the lack of specific direction, is this a comedy? Because at times, I think, you are meant to think so, and yet it is clearly not because the elaborate plot introduces far too much for such a simple idea.

Cleveland Heep (Paul Giamatti) is hiding from a terrible personal tragedy in his life as an apartment superintendent. One night he happens upon a girl in the communal swimming pool, perceiving her drowning he rescues her only to find out she is in fact a narf, a sea nymph from the Blue World. Her name is Story (Bryce Dallas Howard) and she is here in our world to find a special human, one that upon seeing her will go on to make changes in both her world and ours for the better. Her trip here is perilous because of the scrunts, wolf like grass creatures, hell bent on her destruction and thus preventing her from uniting with the eagle sent to return her to her own world. Since one particular scrunt has gone rogue, Story is a Maiden Nerf apparently, and will stop at nothing to kill her, the human world has a number of protectors, a guardian, a healer, a guild and an interpreter. All must combine their talents if they are to reunite Story with her people and ensure the safety of both worlds.

Ok? I've simplified the basic story as much as possible, ignoring the preamble and most in the incidental characters save one; Harry Farber (Bob Balaban) a film critic that may or may not be comic relief, or maybe Shyamalan's voice to his own critics, but more on him later. But even with this outlined the plot is horribly complicated, whenever it appears to be heading in one direction it veers to another with scant regard to its audience. The story is meant to represent a fairytale, good versus evil with definite lines; and that we have with the narf and scrunts. This is explained in the first few minutes of the film, and believed unquestioningly by all that hear it. We then follow a series of meandering points, already explained to get to the end of the film. Think of it as Lucas joining the dots with the Star Wars prequels, with similar results. Shyamalan not content with the fantasy element piles on the sentiment then adds some spiritual yearning, topped off with a sprinkle of horror and severed on a joke plate.

Giamatti's Cleveland Heep is portrayed as pathetic and down trodden, hiding from a terrible tragedy they no one knows about until Story discovers his journal, and in this the character works very well. In trying to discover himself he manages to unite the tenement block in his quest to help Story seeing her as a reflection of himself. Story in this sense could be regarded as conscience. Through Keep we meet the rest of the inhabitants, most of whom are connected in some way to the Blue World whether they know it or not. Principle amongst these is Vick Ran (played by Shyamalan himself, in his first larger than bit part role) a writer that is the one soul that has to see (and in turn be seen by) Story. His book, The Cookbook, is, apparently, full of radical ideas, enough to change the world, and the meeting with Story will enable this to happen. Is Shyamalan trying to set himself up as a writing genius here? His writing alone can save the world? The others are mostly glossed over, but get enough screen time to allow their part of the story to be told, Mr Dury and son Joey (archetypal prophetic child), a room full of stoners, a selection of loud sisters, a Hispanic who weight trains only one side of his body, a Chinese immigrant and Americanised daughter; it is they who communicate the bed time story to Keep, and thus us, never questioning his motives for knowing. And finally Farber the film critic, initial seen as the bad guy, he comes to a sticky end in quite a comic fashion in a Scream-esk parody of killings; comic relief or is Shyamalan trying to silence his critical backlash from The Village (2004)? It is this comedic approach to the characters set in the serious fantasy of the plot that is so disconcerting. Witness Keep's dribbling milk and lying down as he is told the outcome of the story; or Joey reading cereal boxes to discover the plan for Story's escape. And all the while the characters talk in their best Bruce Willis Whisper.

So Lady in the Water meanders between melodrama, fantasy and horror (and comedy?) to its inevitable PG-13 climax without any real conviction in itself. But it falls short of being a bad film by a whisker. There are enough moments of wonder that keep the eyelids open, that hold the scrunts of boredom at bay. That is until the aforementioned ending that while it delivers all that it promises too, still manages to fire like a damp squib. No patented Shyamalan sudden twist here, just a lot of rain and a sigh of relief. Having painted himself into a corner with his direction of film making Shyamalan hasn't broken his mould with this one; it is better than The Village, but a long way from The Sixth Sense (1999).