Lady and the Tramp Movie Review 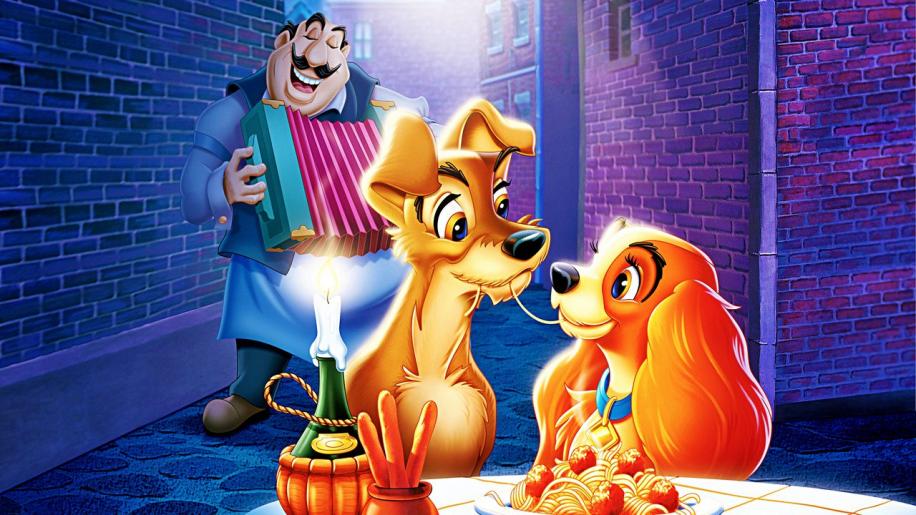 Walt Disney animations have always had a special place in the hearts of film collectors. Back in the 1970’s, the only way to have your own copy of a movie was to buy either a Super 8 or 16mm print – if you could get them. ‘Lady and The Tramp’ was always a firm favourite but you could only buy a couple of 7 minute ‘extracts’ from this particular Disney title on Super 8 sound film. I had both ‘Muzzle Trouble’ and ‘Bella Notte’ in my collection, which if I recall correctly set me back £16 each. If a 16mm print came on the market, it sold for a price I could never have afforded. Now, here we are around 40 years later and you can buy the whole movie on UK Region free Blu-ray for around £20 – and it both looks and sounds great.

At 76 minutes long, it’s ideal for younger audiences or for adults with the attention span of a ferret. Released back in 1955, it was produced in the (then) new Cinemascope widescreen format, but until fairly recently the home video market has had to content itself with a 1.33:1 format version. Now, we’re offered the full width of the widescreen Cinemascope frame of 2.55:1 and the extra width adds to the visual appeal. We’re seeing it as it was originally intended.

Now, anyone who hasn’t seen the film must have been in a coma for the last 60 years as through Disney’s release policy, it has been in the cinemas every 7 years, on TV and available on every video format from VHS to Laserdisc, DVD and now it hits the High Def world on Blu-ray. But anyway, for the one person who has missed it, it’s the story of a young Spaniel, Lady, who arrives in the ‘Jim Dear’ and ‘Darling’ household to be spoilt rotten until the arrival of a baby. At this point, Lady’s life goes downhill rapidly as Aunt Sarah arrives to help out – as do her thoroughly evil Siamese cats, so Lady has to take to the streets. Here she meets Tramp, a ‘footloose and collar free’ kind of mongrel who eats out at a different house every night under the pseudonyms of ‘Little Fritzie’, ‘Little Mike’ or even ‘Butch’. He takes her to the best Italian restaurant in town in the classic ‘Bella Notte’ spaghetti and meatballs eating sequence – which has now risen to the height of being copied and having the Mickey taken out of it by various send up movies. Along the way, Lady ends up in the Dog pound where she meets Peg who sings ‘He’s a Tramp’ and sounds awfully like Peggy Lee. Does Lady find her way back home? Will her Romance with Tramp last? Watch it and find out.

The movie features some great songs like the high soaring, romantic ‘Bella Notte’ number performed by two of the most exuberant Italian waiters in the world and the aforementioned ‘He’s a Tramp’ – which has since become a standard for female nightclub singers.

The story is warm, sugary sweet and tugs at the heart strings in a way that only a much loved Disney film can. The movie has associations for all of us. For me it takes me back to the Alloa Deluxe cinema in the 1960’s during the Summer holidays, where we met a neighbour standing in the queue as we were passing. Much to my surprise, my Mum rummaged around in her purse for the admission fee which guaranteed her a couple of hours of peace from her two young sons. In this sense, a movie is a time portal that takes us back to happier times when the world seemed a nicer place.

It’s interesting to note that Walt Disney was producing this picture at the same time as his dream, Disneyland, was being built in Florida. The film is introduced by his daughter, Diane Disney Miller, who gives us some personal memories of her Dad in a very nice little featurette contained among the bonus features on the Blu-ray. We get to see a reconstruction of her parents apartment above the Fire Station in Disneyland. Disney fans share the affection she has for her father and the legacy in movies he left behind.

Today’s generation deserve the opportunity to get to know ‘Lady and The Tramp’ in all its wonderful hand drawn cel animation glory. It comes from the heyday of the Disney Studio and is a true classic. Be charmed by it tonight.