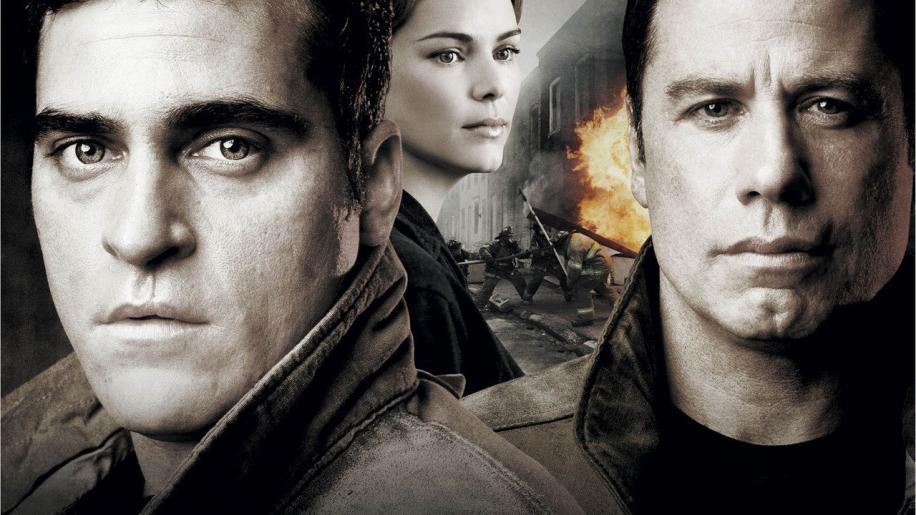 After the tragedies of 9/11, the world went into shock. Numbed by the events that took place on that fateful day, we all stopped our day-to-day routines and stared at the TV, consigned to the notion that we were helpless. It was a day that the modern generations will never forget. But, out of all the atrocities and sadness, a few hundred men risked their lives for the sake of others. People they had never met before, but whom these brave souls risked everything for. They were of course the New York City firemen, and with their courageous acts, it was only a matter of time before a film charting the fearless efforts of these men post-9/11 was made and it's here, in the shape of Ladder 49.Told over the breadth of a decade, Joaquin Phoenix (Gladiator) stars as Jack Morrison, a rookie fire-fighter, who after just come through the training ranks has been given a probationary job at the Baltimore fire station, where he is placed under the supervision of Chief Mike Kennedy (John Travolta), as well as teaming up with the existing team of fighters, who included Morris Chestnut and T2's Robert Patrick. Here, Jack begins to learn the ropes of the station, and learns that his fellow fighters are more interested in playing practical jokes, enjoy games of pool, visit their local watering hole, and hit on in the supermarket than trying to do their job. In fact, one such time that Jack and pal Dennis do hit on a couple of lasses, Jack meets the woman of his dreams, Linda (the lovely Jacinda Barrett), who being a strong, ballsy women, doesn't immediately fall for Jack's charms, but soon enough the two of them are married and have children. But, as things seemingly can not get any better for Jack, a routine yet ultimately perilous job leaves him trapped inside a multi-story building on the brink of collapse, with his colleagues trying desperately to reach him.

Behind the camera is Jay Russell (My Dog Skip), who with his obvious documentary filmmaking background does show some glimpses of his talents, with a few nice hand-held shots and some impressively orchestrated action set-pieces with a impressively frenzied feel to them, even if by the second half the action does become somewhat pedestrian and second-rate. It's from this point that Russell instead chooses to fill the screen with cheesy slow-motion shots of our heroic men as they exit each building or slide down their poles, looking more like the latest Levi advert than a gripping tale of selflessness.

But despite its weak direction, what ultimately lets the film down though is Lewis Colick's inept script. Supposedly perceived as an ode to the phenomenal courage and work of fire-fighters, highlighted by 9/11, the film falls a long way short of their intentions, instead becoming a dull melodrama, flaccid and slow, which is more interested in showing fire-fighters as arrogant women chasers and alcoholics than heroic men who live to save the lives of others without a second thought. Granted, they may well be like that, and if they are then fine, but for a film so desperate for us to show us just how heroic they all are, it just doesn't pull it off. What's left plays more like something from a greeting card with its insistence on schmaltz rather than real, nail-biting emotion, with the characters being undercooked, with even Phoenix's Jack, the main films protagonist, never given any history, with the questions of where he came from and why he wanted to become a fire-fighter never addressed, subsequently depriving the film of any real backbone. This and the vapid machismo dialogue ultimately diminish the film into something that wouldn't be out of place on a dozen American soap operas.

The secondary characters too are never given any room to expand, with the majority of them, including Chestnut and Patrick's fellow fire-fighters, who, even though they have obvious talents, are primarily used to fill up the background, emerging only to fire one-liners or make a fool of the latest rookie additions. Even Travolta's captain is left feeding on scraps, and only pops up once or twice to break up the tomfoolery around the station, or to give a few "where's your respect" type of speeches.

Having said that, Colick's handling of the relationship with Phoenix and Barrett's husband and wife, which is written with a great passion and devotion without ever becoming overly sentimental, and shows an immediate and obvious chemistry between the two actors. Indeed, it's Phoenix who is the films saving grace. Here, he is his usual brilliant self as the disillusioned and confused Jack, who is slowly becoming one of the best young leading men in Hollywood, and has carved somewhat of a calling card for himself as the likeable everyman, eager to do what's best for those he cares for. Surely it's only a matter of time before Phoenix is a true household name, and finds himself on the Hollywood A-list.