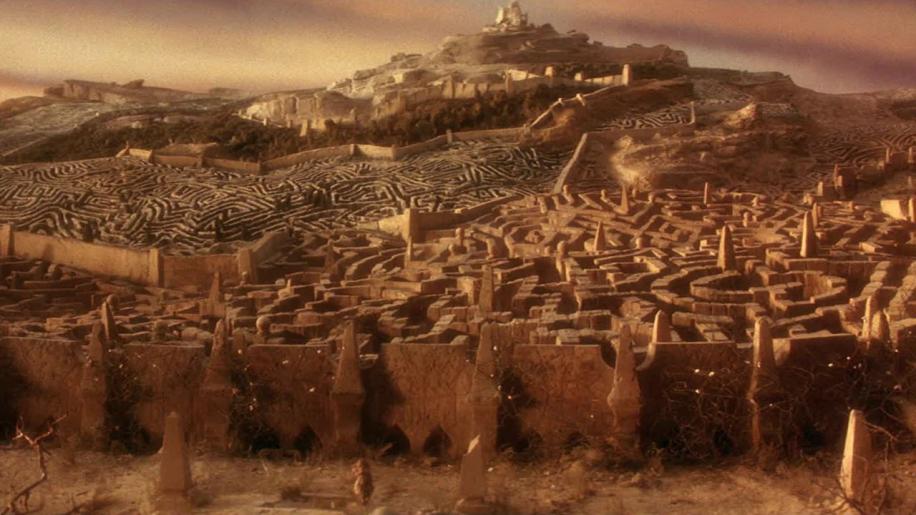 For those who can remember as far back as the 1980's, the name Jim Henson will forever be synonymous with 'The Muppet Show', which rose to giddy heights of popularity in the TV ratings. I have to admit that while my friends seemed to be captivated by the charm of the foam and fur characters, I just didn't get it. Jim Henson branched out from the charismatic puppet frogs, bears and pigs into the field of creature creation with 'Henson's Creature Shop', producing both puppet and animatronic characters for other people's movies. But why stop there? Why not use them in your own movies? Thus began a foray into feature film production that included 'The Dark Crystal' in 1982 and 'Labyrinth' in 1986.
While 'The Dark Crystal' was something new in puppetry terms, it was 'Labyrinth' that provided a mix of human and creature effects, with the added attraction of the iconic David Bowie in a starring role as well as composing and performing 5 new songs for the movie. The most famous of the songs has to be 'Underground', a track that once heard even after a break of 20 years is still hard to get out of your head.

'Labyrinth' is the everyday tale of a young girl, Sarah (Jennifer Connelly), who is tired of having to look after her baby brother Toby (Toby Froud, son of the Conceptual Designer of the movie) while her father and step-mother go out on the town. In fact, so disenchanted is she with her lot in life that she wishes that the Goblin King (Bowie) would take her baby brother away and turn him into a Pixie. You know, for many of my childhood years, my younger brother was a total embarassment to me. If only I'd known then that it was so simple... but I digress.
Naturally, no sooner has the Goblin King spirited away the ankle biter than our Sarah has her regrets. The Goblin King reveals that unless Sarah can navigate her way through the maze (the Labyrinth of the title) and free the child from his castle, it will be turned into a Pixie.
Thus begins a tortuous journey and along the way Sarah meets a deceitful dwarf, Hoggle, some talking door knockers and a large orange fuzz ball called Ludo, among others - who all help and hinder her in equal measure.

They say never appear with children or animals (don't know what they say about Muppets), but David Bowie manages to keep his head above water and escapes with his Rock Star reputation intact thanks to the lively musical numbers. He never comes across as truly evil and menacing as there's an element of humour running through the movie. During shooting, Bowie had some scenes with the baby and to stop the kid from screaming the set down he had a Sooty puppet on his hand just out of shot. The movie purported to have something for adults as well as children and the high point for female viewers just has to be near the end where Mr Bowie appears in costume with a pair of pale grey tights, so form fitting you can almost tell his religion.

Jennifer Connelly is talented and pretty enough in the role of the precocious teenager and she gets on well with the creatures. This isn't really a movie about caring for the characters - it is after all, a fantasy. The real star of the movie just has to be the Ludo character, who is both large and furry - perfect for the movie merchandising. I remember seeing the actual creature at the Museum of the Moving Image when it was based on London's South Bank and it looked massive. To think it was operated by one actor/puppeteer inside the suit with a video camera in one of its horns and a monitor inside the stomach, makes you think that he must have lost a lot of weight due to the heat inside.

I don't recall the film being a runaway success at the box office upon its release, but it does stay in the memory for Bowie's contribution and for the Henson creatures.
It's a pretty straightforward story, but it's the creative realisation that makes it attractive.
Does it have enough to hold the attention of a young audience 23 years after its initial release?
Who knows? Stranger things have happened in a place where things are never quite what they seem.