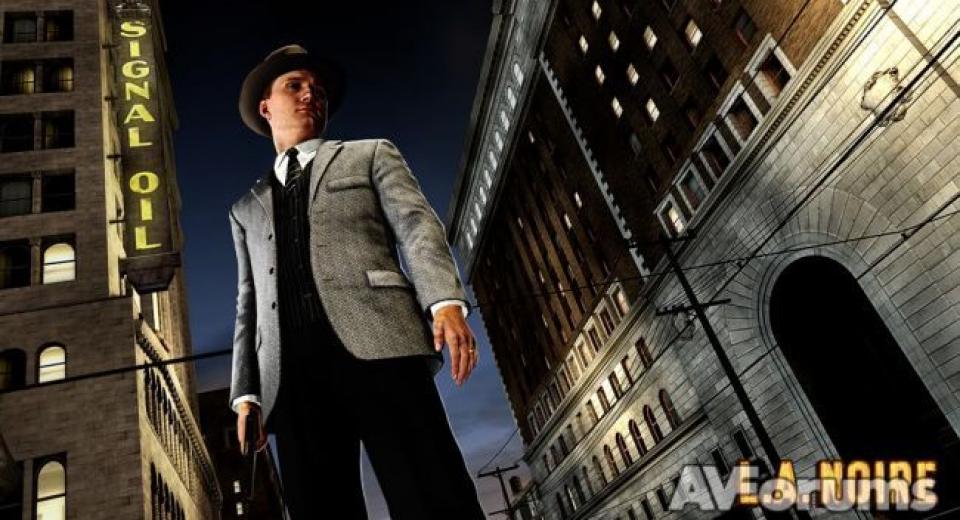 You step in front of a vehicle and hold triangle. Cole Phelps - protagonist of LA Noire - brandishes his ID. "Sir, step out of the car please. L.A.P.D."
It’s a moment that underlines just how familiar yet different LA Noire is from other Rockstar offerings. Rather than dragging the shocked occupant from his car, punching him a couple of times for good measure and speeding off towards the next robbery, you find yourself waiting politely for the driver to move aside to allow you and your partner to chase down a crook. LA Noire features the usual Rockstar third person viewpoint, the classic controls, unchanged shooting and driving mechanics and so on – but that's where comparisons with Red Dead Redemption and the Grand Theft Auto series end. Phelps isn't a criminal, he's an officer of the law in 40’s Los Angeles, and he behaves accordingly. The focus of LA Noire is very much on interaction – both with crime scenes and with people. And it's in this regard that it stands apart not only from previous Rockstar titles, but from other games in general. As Phelps, you'll scour crime scenes in a manner that recalls the point-and-click adventures of the good old days; and by employing the much-hyped motion capture technology ‘MotionScan’, facial animation is brought as close to reality as the medium has ever seen. LA Noire isn't a free-roaming game in the usual sense. While the city is essentially an open world, you’re shepherded around the map as you progress through the story, which comprises around 20 discrete (but frequently related) cases. Side quests aren't as abundant as in the GTA series, or as spontaneous as in Red Dead Redemption. Rather they are carefully crafted, narrowly-scoped set-piece scenes. In LA Noire, linearity is the order of the day. However, exploration of subject matter is still as expansive as ever; moral themes play as much of a role in this Rockstar title as any other. The developers manage to create some compelling personalities in LA Noire. As always, they're keen to show rather than tell, and the subtleties and complexities of any issue are drawn out by Rockstar’s skill of blurring the lines between 'good' and 'bad' characters and actions. Themes of racial and sexual discrimination aren't shied away from, and some wonderful scripting and acting come together to bring the period and the place to life. Anyone who has followed the development of LA Noire will most likely be keen to see how the MotionScan technology delivers. The answer is: impressively. Your judgements on whether a suspect or witness is lying to you will be dictated as much by his or her expressions as the words they speak. A nervous glance or a hard swallow will provide the prompt for you to scream "J'accuse!" at the screen and hit the 'lie' button. There’s still a sense of the uncanny valley about the animation at times, but it's such a huge leap forward for realism in games that any discomfort you might feel is easily outweighed by how captivated you'll be by the implementation. Couple the technology with a high-quality cast and you've got one of the first games ever to feel truly 'acted'. Some familiar faces appear: Cole Phelps himself is played by Aaron Staton from AMC’s Mad Men. The voicing is correspondingly stellar and it shows once again how investment in quality performers contributes to creating an engaging narrative. In that context, it seems somewhat churlish to criticise the visuals in other areas, but unlike Grand Theft Auto 4 and Red Dead Redemption, LA Noire doesn't employ the RAGE engine or Euphoria – and it shows. Non-facial animations aren't as natural as you'd hope, and some of the textures are bland. It’s also likely you’ll notice the occasional pop-in. But none of that is enough to drag down the game, and it's understandable that Team Bondi's primary efforts were directed elsewhere. It's worth noting one interesting feature they did slip in: the option to play in black and white – you know, for the full noir experience. As you'd expect, the music and effects are spot on. Audio cues are also used smartly in investigating crime scenes, where a sound indicates the presence of a clue (supported by a small pad vibration). The soundtrack fades out altogether when everything significant has been found, or if you wander out of the relevant area. A mention should go to the location itself. Los Angeles in 1947 has been lovingly recreated by Team Bondi. There are a number of monuments to find and a wide variety of period cars to discover and drive. With just a modest bump in graphical quality, the Los Angeles of LA Noire would have been truly breathtaking. As you work through the cases in LA Noire, you'll find each sequence falls into one of three types: looking for clues, interviewing, or some kind of action. Most cases begin with a search of the crime scene, which is commonly a small area featuring a dead body and some hapless police types wandering around. You're able to search the body and hunt around for clues. For better or worse, the game unquestionably holds your hand through these scenes. It's almost impossible to miss anything because you'll know that as long as there's music playing, there's something you haven't yet found. Nevertheless, the methodical pace of these sections is enjoyable and despite the inevitability of a successful search, it's still satisfying to learn all you can from the area you're exploring. It’s during interviews with suspects and witnesses that the new technology is shown off. Phelps will ask a question, the interviewee will respond, and then it's for you to decide whether what they said is the truth, in doubt, or a lie, based on how they've answered.  The scenes themselves are delivered wonderfully, but the approach to interaction is problematic. If you accuse someone of lying, you have to back it up with proof from the clues you've accumulated. However, you're never quite sure prior to pressing the 'lie' button quite how Phelps will phrase his accusation, and it makes it difficult to know precisely which bit of evidence will corner the suspect. Getting it wrong can be a frustrating experience because you, as the player, know exactly what you want to say but you're not seeing it delivered on screen – it’s as if Bioware never existed. You can even be left with no option but to charge a man you know to be innocent because you made a mess of the interview.  Reversing the process may have brought about more satisfying results: rather than trying to catch the suspect out on a lie with proof, it may have been better if you were able to present them with the evidence and judge how they react to it. The action sequences are typical Rockstar fare: shootouts, car chases, tailing people without being seen and so on. They are constructed as well as they've ever been – which is to say they're competent but not outstanding.  The one oddity about pursuing suspects on-foot is the unpredictable limitation on being able to use your gun. Sometimes you'll be able to kill the guy, sometimes you'll fire a warning shot, and sometimes you'll find you can't draw your gun at all. It's understandable for plot purposes, but when you get thrown into a scene, the need to pull the left trigger to try to figure out what your options are isn't ideal.  Interestingly, as if to underline the emphasis on interaction over action, if you fail at one of these sequences a few times, you'll get an option to skip it altogether without penalty.  There's a basic experience-point system that allows you to reveal unlockables or gain intuition points, which can be used to either remove an incorrect option from an interview (in the “Who Wants to be a Millionaire?” style) or show all the clues in an area on the mini-map. The system feels a bit unnecessary but as levelling requires no manual intervention it doesn't detract at all. LA Noire is single player only. The claim is that it lasts as long as two seasons of a television show, which is about right if you don't let your partner drive everywhere (the fast-travel option). It's not a game to be played too hastily, the methodical nature would become frustrating if you try to tear through it; but neither is it a game to be left for days mid-case, you need to have the details fresh in your mind. Action sequences aside, you can’t fail to progress in LA Noire, even if that means you end up with the wrong outcome for a case. The story relentlessly pulls you along in the direction it wants to go in, which can sometimes lead to clunky continuity. If you’re unsatisfied, cases can be replayed from the beginning. If replay-to-perfection is your thing, the longevity of the game will increase exponentially. No doubt some DLC will appear further down the line, and it will be interesting to see how Team Bondi build on (and learn from) the existing content.
If the review sounds overly critical, it’s only because frustrations and disappointments are that much more vivid when playing something that’s so ambitious. To be clear: this is better than 95% of games out there.  But the reality is that at times LA Noire feels a little like a prototype or an experiment, in much the same way that Fahrenheit could be seen as a prototype for Heavy Rain. And the analogy with David Cage’s efforts are valid: exceptional games are often called genre-defining, but both Quantic Dream and Team Bondi are aiming beyond that by trying to produce games that are genre-creating, a rarity in the mainstream market. This is an effort that should be supported and applauded, even if the games fall short of perfection. With LA Noire following so soon after Portal 2, it’s a real treat for those who want to see narrative in games elevated above historic standards. The financial success that will surely follow can only further the case for high-quality actors and scripting in all appropriate games. In this regard and many others, LA Noire is a triumph. Play it.