If in doubt, sing it out 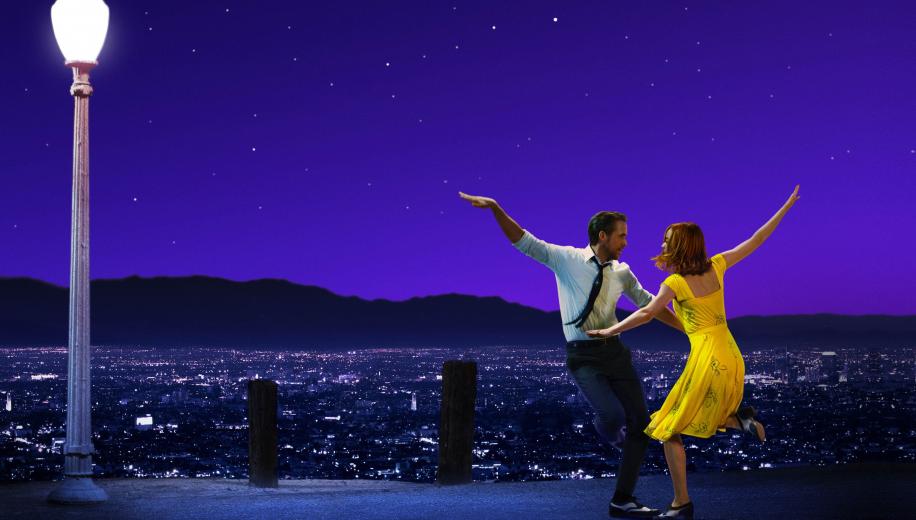 Buzzing with electric song and dance numbers, and a great throwback double-act from Gosling and Stone as a modern-day Fred and Ginger, La La Land may well win you over.

Unlike his tremendous Whiplash, writer/director Damien Chazelle's long-standing passion project, La La Land, may not grab you right from the get-go. The opening sequence, however audaciously staged, feels ultimately like an empty throwback homage, and sets the stage for a film that's about impressive choreography and outstanding music, but has little else. That all changes towards the end of the first act though, as we finally warm to the two lead characters. Gosling's down-on-his-luck piano player (who has far more in common with his hapless detective in the underrated Shane Black flick The Nice Guys, than with his Refn roles) eventually submits to the repeated chance encounters with Emma Stone's wannabe actress, and the chemistry between the two springs into an excellent little song-and-dance number.
It's a dangerous game, taking this long to win an audience over, as some will have given up long before you get to the heart of the piece, but those who persist may find it a truly enchanting piece. Chazelle jettisons the raw energy of Whiplash (ultimately a far better movie, but a very different movie too, so it's both understandable and also slightly unfair to compare) in favour of a striking visual style, tap-your-feet beats, outstanding choreography and two tremendous leads in Gosling and Stone, who commit to the song and dance routine with aplomb. This is one big tribute to films of old, with The Artist-like traits that make the Oscar near-win somewhat predictable, but, in much the same way as The Artist, there is a wonderful spirit to this whole affair which, if you let it, will draw you right in and sweep you away.

Shot in 35mm (or, for one particular scene, 16mm), the source material had the potential to produce near-native 4K, but, as is more common than not, has been cut short by a 2K DI (digital intermediate). Nevertheless, the heavily stylised work frequently lends itself to the UHD format, and even if detail levels seldom truly impress, there are some nice little touches and highlights throughout which push this a step up from its 1080p Blu-ray counterpart.

Darker sequences remain strongly represented, colours are lovingly rendered (which in a film as colourful as this, is a key element) and overall it's a very nice looking UHD presentation. Sure, fans who were expecting a hyper-enhanced Mad Max: Fury Road-like affair may well be disappointed, but Chazelle may not have ever intended La La Land - particularly given its throwback style - to look like that, and so the more restrained but also more faithful end result, complete with a thick swathe of suitably filmic grain, shouldn't necessarily be dismissed so readily. Subtly impressive.

Cas Harlow reviewed the audio using a standard 5.1-channel setup – La La Land comes adorned with an excellent, immersive, Dolby Atmos mix framed around the backbone of a strong Dolby TrueHD 7.1 track. Dialogue remains firmly prioritised across the frontal array, clearly and coherently disseminated, and there's solid fine effects observation, but it's the punchy soundtrack (complete with song, dance and tap numbers) that defines the piece. From the elaborately choreographed opening freeway sequence to the later song and dance numbers between the leads, the film is packed with tap-your-feet-to-it enthusiasm which is utterly contagious, and delivered with aplomb across the array. Even without the enhancements of Atmos, La La Land impresses on the aural front, sweeping you up into an immersive, oftentimes engulfing affair complete with LFE weight and captivation across the surrounds. Excellent.

Steve Withers reviewed the audio using a 7.2.4-channel Dolby Atmos setup – La La Land isn't the kind of film that necessarily lends itself to an immersive audio soundtrack. The musical is more about the songs than it is about object-based effects but it remains an accomplished soundtrack that delivers the artistic intentions of the filmmakers with great style. The dialogue is clear and focused on the screen, whilst the music is beautifully rendered across the front soundstage. The use of the LFE channel is very effective in under-pinning the music and songs, whilst surround effects are used to enhance the numerous dance numbers. This is where the Dolby Atmos soundtrack really excels, surrounding the audience and swirling around their heads as the leads glide across the screen. The dance number in the Griffith Observatory is a great example of how Dolby Atmos is used to subtly enhance the audio and ultimately deliver a superb soundtrack overall – very impressive.

Helpfully Lionsgate have ported over all the extras onto the UHD disc, which include a solid salvo headlined by an Audio Commentary by Writer/Director Damien Chazelle and Composer Justin Hurwitz, which highlights the passion behind the project, which has been gestating since long before Whiplash, and the choreography of some of the key setpieces. We also get 11 extra Featurettes, totalling nearly an hour and a half of behind the scenes material looking behind the production, the freeway scene, the party scene, the leads, the director, the music, the style, the ending and the demos.


The 4K disc boasts a solid salvo of extras

We also get a number of trailers and several stills galleries, as well as the option to jump to key songs from the film. If you let it, La La Land will draw you in and sweep you away

Damien Chazelle's follow-up to the tremendous Whiplash is a foot-tapping throwback song-and-dance number with two great leads and a warm heart. For those who get past the slow-cooking first half-hour or so, there's plenty to love beyond that.