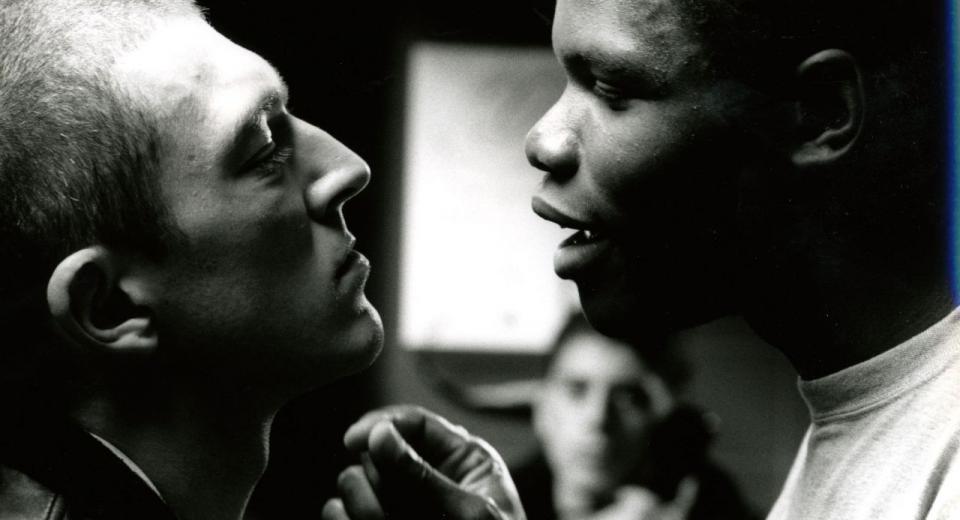 La haine is presented in its original aspect ratio of 1.85:1. Supervised by director Mathieu Kassovitz, this new high-definition digital transfer was created on a Spirit Datacine from a 35mm fine-grain master positive. Further color correction was done on a Specter Datacine. Thousands of instances of dirt, debris, scratches, splices, warps, and jitter were manually removed using MTI’s DRS and Pixel Farm’s PFClean, while Image Systems’ DVNR was used for small dirt, grain, and flicker.

Criterion have once again knocked it out of the park with this impressive restored 1080p High Definition video transfer, personally supervised by Mathieu Kassovitz himself. The opening credits sequence looks suitably poor, boasting blocky, soft footage commensurate with the documentary style that has been adopted, but as soon as the movie proper starts, however, we find ourselves privy to a quality rendition which, whilst limited by Kassovitz’s raw, street-based and often handheld footage, looks considerably better than we have seen from this movie before.

Detail is generally very good, with only infrequent lapses into softness; clarity is similarly variable, but strong for the most part. Contrast is excellent, allowing for superior night-time sequences which have no significant artifacting, blocking, crush or other digital issues. There is some light sharpening, a hint of DNR, and blacks are far from perfect, but this is still a largely impressive offering, very respectful of the director’s urban stylisation, and utterly fitting for this excellent drama. The remastered DTS-HD Master Audio 5.1 track that accompanies the movie is similarly respectfully towards the material, and whilst it’s not a particularly engulfing bombastic offering, it certainly does justice to the movie, offering up some substantial depth and keen atmospheric observation. Dialogue comes across clearly, crisply and coherently, dominating the frontal array throughout the proceedings. Effects are almost entirely ambient, with only a couple of gunshots shaking things up and adding some serious punch to the mix. From car noises to street riots; rooftop parties to the hubbub of a posh art gallery exhibition; metro screeching to nagging car alarms and intercom buzzers, there’s a wonderfully authentic feel to the surround soundscape, putting you right there in the mix on this docu-drama day-in-the-life voyage, and making you feel like one of the gang. It’s nothing daring and overwhelming, just some nice subtle ambience that suitably reflects the material. In this introduction to La haine from 2006, acclaimed actress and filmmaker Jodie Foster discusses her passion for the film and the reasons she championed and presented it in the United States.

Foster’s 16-minute introduction is a welcome interview where she explains her love for Kassovitz’s films and how La haine’s socio-political themes truly drew her interest and made her want to promote the film back in America. It’s a nice little piece, offering some brilliant insight and setting the mood for the film. Well worth checking out. (In English)

This audio commentary, recorded by the Criterion Collection in 2006, features director Mathieu Kassovitz.

Writer/Director Mathieu Kassovitz provides an excellent accompanying commentary which once again highlights his intelligent and personal approach to the subject. He talks about his inspiration, his ongoing concerns with the state of the banlieues and the negligence of the administration, and the broader awareness that ensued following the release of his film (apparently, to no avail unfortunately). Of course we get plenty of technical insights as well, looking into his stylish direction and the tricks behind the camerawork, but it’s the more political observations that are truly compelling and make this a must-listen track. (In English)

This documentary, produced by StudioCanal, traces the history of La haine from the real-life shooting that inspired the screenplay to the film’s success at the 1995 Cannes Film Festival. It includes interviews with director Mathieu Kassovitz, actors Vincent Cassel and Hubert Kounde, and producers Christophe Rossignon and Alain Rocca.

This sizeable, feature-length 83-minute retrospective documentary takes us through the entire production, from screenplay to shooting, interspersed with real newsreel footage of rioting, news reports on the deaths that sparked the riots, and the police response, as well as clips from the film itself. It clinically charts the timeline of the production, with frequent interview snippets from the cast and crew talking about the intentions behind the movie and their experiences filming it. It’s a fantastic companion-piece to the film that is well worth your time. (In French with English subtitles)

In the following programme, noted sociologists Sophie Body-Gendrot, William Kornblum, and Jeffrey Fagan discuss the significance of La haine’s banlieue setting and the realities of public housing in France and the United States.

An extremely informative piece, this 34-minute documentary looks at the real-life situation in the banlieue, comparing it with the authentic documentary-like depiction in the movie. With contributions from numerous scholars and experts in the field, we get even more insight into the socio-political dynamic of the situation. If you want to learn more about what’s really going on in the banlieues of Paris then this should be your first port of call. (In English)

Preparing For The Shoot

This brief video details the cast and crew members’ first experiences in the housing project that served as their home while they prepared to shoot La haine.

A 6 minute fly-on-the-wall addition, this near-montage of behind the scenes shots has the cast and crew sitting around in the banlieue, where they lived for several weeks before shooting commenced on the film, chatting about the way in which they are living, and how they hope it will get them into the right mindset for the production. (In French with English subtitles)

The Making of a Scene

In this on-set footage, director Mathieu Kassovitz orchestrates one of the more technically challenging scenes in the film, the one in which Vinz fantasizes about shooting a cop.

Here we get a further 6 minutes of behind the scenes footage, here specifically looking at how they shot one particular scene, with b-roll clips, interviews from the filmmakers, and a glimpse at Kassovitz in action. (In French with English subtitles)

The following scenes either were not included in the final cut of the film or appeared in edited form. Because La haine was shot on colour stock and printed in black and white, these time-coded rough cuts are in colour. Each scene features an afterword by director Mathieu Kassovitz.

There are four Scenes in total, two Deleted and two Extended, all with optional accompanying afterwords by the director. The first Extended Scene, OCB, is worth checking out – it has an interesting, if not wholly necessary, expansion on the ‘so far so good’ conversation between Vinz and Hubert; the Extended Eiffel Tower Scene is pointless, with them just waiting around even longer for the tower lights to switch off. Out of the Deleted Scenes, Rooftop Party is just a minute long and has another confrontation with the police, and Homeless Man is a 38-second shot of Vinz watching a homeless man lying in the middle of the street. They’re both just curios really, but it’s nice to have this extra footage included here. (In French with English subtitles)

Here we get a series of excellent black and white behind the scenes stills shots that truly capture the mood of the production, each with welcome title cards setting the scene.

The disc is rounded off by two short Trailers. (In French with English subtitles)

Of course Criterion always complete their package with an excellent accompanying Booklet, and this is no exception. This time round we get an essay by film scholar Ginette Vincendeau and a 2006 appreciation by filmmaker Costa-Gavras, both of which make for sharp background reading. A powerful and poignant masterpiece, Mathieu Kassovitz’s 1995 drama La haine remains an unmatched exploration into the true reality of the Paris banlieues, charting the road-trip-like odyssey of a trio of multicultural immigrant youths. Frustrated by the fact that they have no opportunity for a future in this foreign land that they call home, their unruly delinquent behaviour is only met with violently repressive response from the authorities, igniting the already tense situation caused by the earlier police shooting of one of their friends. Brilliantly juxtaposing this voyage with the overall plight of the ghetto-like banlieue, and the trapped inhabitants therein, Kassovitz offers up a keenly observed study of socio-political machinations wrapped up in an insightful urban indie drama package.

On Region A-locked Blu-ray Criterion have once again done a stunning job with this package, offering up impressive video and audio, especially considering the low budget restrictions of the production, as well as a hefty extras package that should satisfy all fans. There’s no doubt about it, it’s a must-have addition to your collection, well worth picking up now.