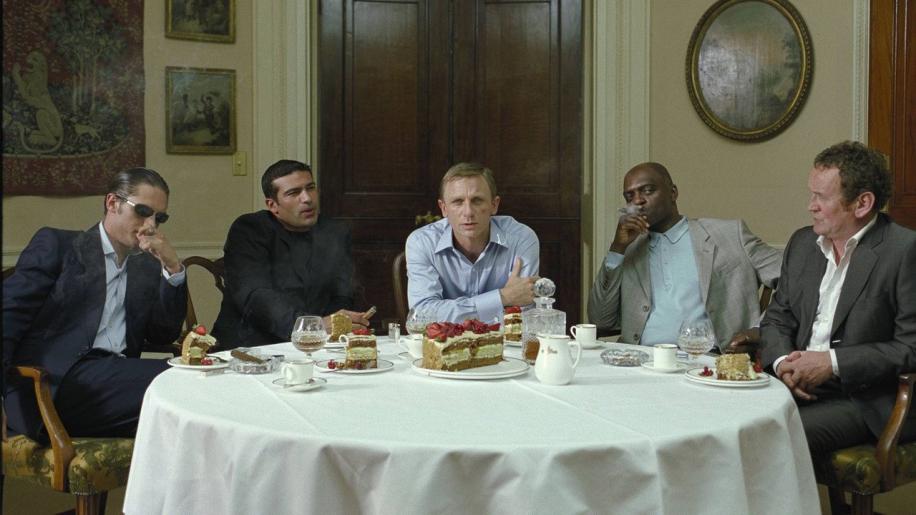 Picture quality is pretty good, with a very clean print showing no form of dust or dirt. Colours are crisp and clear, but the film isn't a particularly vivid one given its style, but detail levels are generally fine. In one scene in particularly, when the camera pulls back from Craig's' face, you can see all the pores and blemishes on his skin, while the hair on his eyebrows are noticeable to the point of each individual hair. While on the subject, skin tones are natural looking and not either washed out or overly accentuated. Black levels are generally consistent and are nice and deep for the most part with one exception that was a little faded. The transfer has some artefacts present, mostly towards the end during the night time scenes, although in fairness they are only mildly annoying, with edge enhancement being kept to a minimum with only slight halos, which seems to vary between non-apparent and slight depending on the scene. However, I would say that the transfer is a little soft in general, initially noticeable on the beginning credits and throughout the film. I've seen better but I've seen a lot worse, but this is generally rather nice.

While the movie is reasonably dialogue heavy, when the soundtrack gets busy, it's rather nice, with noticeably loud music (especially in the club where we first see Ms. Miller) and some decent LFE when required. Dialogue is crisp, although a tad quieter than the rest of the soundtrack which was a shame for such a recent movie. Surrounds are used more for the soundtrack but the ambient sounds are well placed and give the movie a decent atmosphere. Music is particularly bass heavy, which isn't a criticism or a detriment, but does highlight the weaknesses of the dialogue and what it could have been.

Disk one's sole extra is a commentary between the director and the writer, but Disk two contains a reasonable cornucopia of material to compliment the movie. First off, the alternate endings and deleted scenes come complete with commentary, which sadly aren't available as menu options, rather having to be played consecutively. These are non-anamorphic wide screen and in stereo only, but show where the deleted scenes (which aren't really more that alternative takes or extensions) are best left out of the movie, the alternate endings only enforce that the right ending was used as to be honest, the alternates are pretty weak. The making of promo, which runs just short of 6 minutes, is typical PR material and rather gushing, particularly Miller and Gambon, although to a lesser degree. The music video “FC Kahuna - Hayling” is a rather odd affair, the music not being unpleasant to listen to, but the video is certainly surreal. Trailers present on the disk are for “Layer Cake”, “Snatch”, “The Forgotten”, “Hitch” and “xXx : The Next Level” and rounding off the extras are the storyboards and the Q&A.

If you're expecting another slice of Guy Ritchie's underworld, where thugs are more like a pair of cockney scoundrels, you may be somewhat shocked. This movie isn't played for laughs at all and as such works better as a gangster movie than Ritchie's previous two. It's not without its flaws, both as a movie and as a DVD, but it is entertaining to watch, with some particularly good acting and casting. It certainly isn't a dumb movie, as the separate plot threads entwine throughout, although it is very accessible to watch. Recommended.