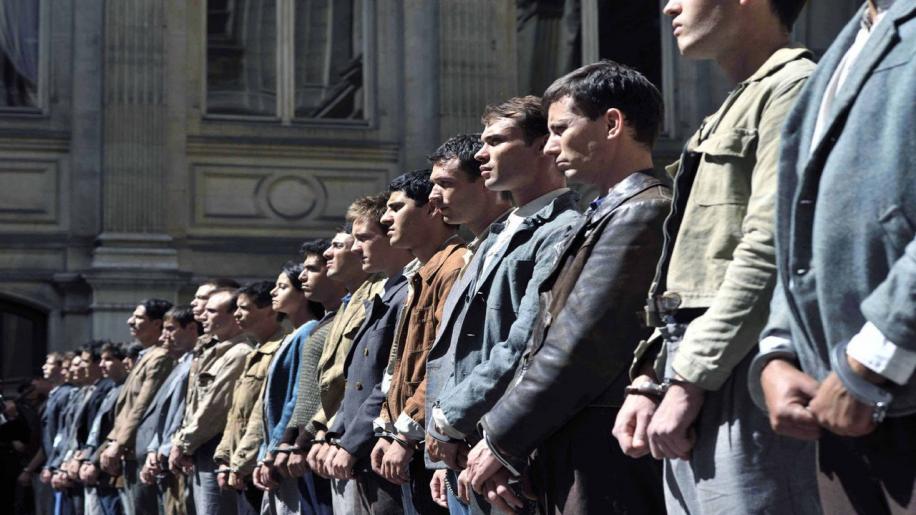 'Army of Crime' was released in 2009 and was directed by Robert Guediguian. Famous for his strong characterisation, Guediguian has assembled quite an extensive cast for his latest offering. Simon Abkarian ('Casino Royale') takes the lead, playing Missak Manouchian. Virginie Ledoyen ('The Beach') plays his wife, Melinee. These two experienced leads are joined by Robinson Stevenin ('Bad Genres'), who plays Marcel Rayman and Grégoire Leprince-Ringuet ('Love Songs'), who plays Thomas Elek. These four main protagonists are joined by ten or so secondary characters, who add to the core tale of the main players. One of Guediguian's favourites, Ariane Ascaride ('Lady Jane'), also pops up in this feature playing Thomas Elek's mother. With such a large character pool, it appears that the director will be in his element with this movie. However, with the similarly themed (i.e. WWII based) powerhouse that is 'Inglorious Basterds' to contend with, the French director certainly has his work cut out (a case of poor timing perhaps?!).

The movie opens with our heroes (and a lot of their partisan buddies) travelling on a prison bus to face trial and execution. As the camera pans from face to face we see that many are young but all have that haunted look about them that only the travesties of war can instil on its victims. Through flashback we begin to learn the brave and harrowing tale of this group of French Resistance fighters, who went down in history as some of France's greatest patriots for their heroic deeds during World War II. The plot focuses primarily on Missak, who fled to France following the Armenian Genocide (during which Turkish soldiers annihilated the Armenian population of the Ottoman Empire after WWI), the horrific slaughter of his entire family etched into his mind forever. Although now an active member of the highly secretive French Resistance movement, Missak has vowed never to revisit the atrocities he witnessed during the first recorded holocaust in history and focuses his energy into his poetry and covertly leading the Resistance.

Working with his equally patriotic wife, Melinee, the two distribute pamphlets and other such propaganda to gently slow the seemingly unstoppable march of Hitler's war machine. The poet Missak is not a violent man by nature but his hand is forced to bear arms when it becomes obvious that a UK/USSR victory may not be realised. With the systemic campaign by Hitler to deport (and slaughter) all the French Jews, Missak looks to his extended French family of idealists and partisans for support and mobilises a small guerrilla army to take France back from the Germans.

The movie begins with the closing scenes, a decision I often question, as it makes the director's job a whole lot more difficult (given the fact that the movie's conclusion is already known). This movie is somewhat different to others who adopt a similar approach (e.g. 'Fight Club'), in that anyone who is familiar with the source material will already know the tragic fate of the key players (not to mention the fact that the opening voiceovers indicate that they're all dead anyway!). The direction from Guediguian, like the pace of the plot, is slow, steady and measured. Each shot is beautifully framed and although there's no camera trickery displayed by the veteran helmsman, his work here is stoically solid, captures every detail and perfectly suits the tone of the material. The authenticity of the piece also deserves high praise, with its perfect recreation of 1940's France. Although at times I felt that things were moving a little too slowly, there was always another twist or event which won back my undivided attention. If you are looking for a violent and explosive recreation of WWII, you will not find it here as this is the story of the real faces behind the French Resistance; there are very few action scenes (for such a violent period in history) but again this suits the overall tone.

The movie focuses a large percentage of its hefty run time on the characterisation of almost every member of the extensive cast, all of whom perform to a very high standard. Everyone is given adequate on screen time to develop personality and slowly all the major players in the Resistance movement are exposed. Missak and Melinee hold the lion's share of on screen time and their deep and undying love for one another is poetically projected in that special way that only French films can manage (without appearing cheesy and false). Abkarian is an absolute powerhouse in this movie and lends a tremendous weight to his character, with eyes that reflect the pain and constant inner turmoil of Missak. Ledoyen also puts on a very strong performance and is a perfect complement to Abkarian; the two certainly have excellent on screen chemistry. Guediguian also spends a considerable portion of time building on the back story (and family members) of Marcel (a trigger happy Nazi slayer) and Thomas (a staunch Communist demolition amateur) ; two of the more exciting characters in the movie, who could have featured in Tarantino's alternative WWII epic due to their unhealthy thirst for Nazi blood. Both Leprince-Ringuet and Stevenin are strong in their respective roles but they really could have done with some more time to develop. It's also a shame that their violent antics are not given more focus (in my depraved opinion). In saying this, the time which the director invests in character development pays dividends as it really adds weight and emotion to the ever increasing Parisian Jewish eradication. The primarily character orientated delivery also accentuates some of the more brutal scenes, which include some graphically shocking torture sequences.

To be honest I'm not much of a history buff but the French gendarmes don't come across too well in this movie at all. They are portrayed as Nazi sympathisers who work closely with German SS generals, employing brutish methods to break down the Resistance and capture its leaders. I suppose that this is a fair portrayal as 13,000 French Jews were herded into the Velodrome d'Hiver for “deportation” during this time, without the involvement of one Nazi soldier; a bitter pill for the French to swallow. The Parisian suburb of Drancy is also mentioned in this movie, which was another staging area that the French police used before shipping the Jews to Auschwitz. The heroes of the day are most certainly Missak and his brave band of Partisans. Even their atrocious acts of murder are justified in that it appears that many of them had two simple choices, fight or die. There are subtle hints of the real pain that the French Resistance caused France and her people during the war. As the partisans sabotage attacks grew more successful and grander in scale, the Germans simply transported the effects of these attacks (such as destroying food shipments and blowing up power grids) back on the French people. This led to a growing feeling of animosity towards the resistance fighters, whom many considered no different to the Nazis. The majority of French people simply wanted to get on with life and ignore the war which was engulfing their country. It's not surprising that Missak and his freedom fighters are put on a pedestal here, as following the war they were all heralded as heroes (even though this wasn't the national consensus during the war; they were seen as a bunch of immigrants who were making matters worse). It's the legend of the Manouchian Group which is portrayed to perfection in this movie, with few tweaks of the actual historic facts to romanticize the emotional core and pathos of the story.


All in all this is a fine movie that takes a different approach to the normally violent and gung-ho tales of WWII. The movie delves deep into the hearts and minds of the people who had the backbone to stand up and face the evil which was poisoning their country. Although the tone is bleak and slightly depressing, it's nonetheless a moving and gripping story. The only flaws are the slightly lengthy runtime (which could have been trimmed to two hours without any loss of impact), the introduction of too many non-essential characters (and subplots) and in my personal opinion a couple of more violent encounters would have gone down a treat. Where the movie comes up trumps is in its character development and the collective excellence of the cast. It seems that Guediguian has a rare talent to really connect with his actors, which means that he gets the best from them. The plot contains enough intrigue and excitement, along with the interesting personalisation of the characters, to hold the viewers attention for the duration. This will undoubtedly be a highly successful and popular release in France but the impact of some of the closing scenes (where a voiceover names all those in the Resistance and proclaims that they died for France) and other francophone patriotic content may not translate to non-French nationals. I would recommend this movie to fans of the genre as its one the most engaging and human war stories that I have seen in recent years, a fact largely accredited to the stellar cast.