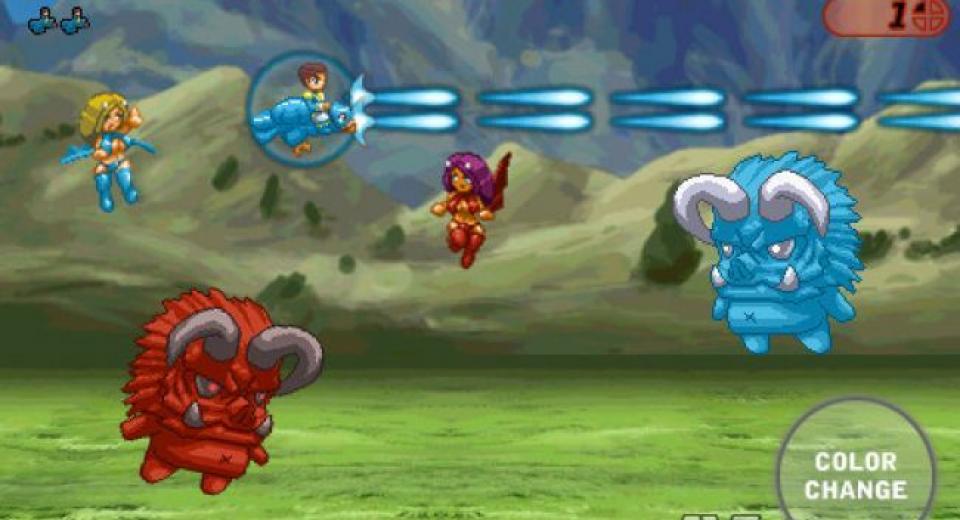 As the old saying goes, “Imitation is the sincerest form of flattery”, and if that’s true then Treasure must surely be flattered by Microforum’s Kyotokei. Both 2D scrolling shooters aligned to the “bullet-hell” subset of the genre, the art style may be different, but the comparison hinges on the use of a core mechanic – polarity. Treasure dabbled with some of their earlier shooters, but arguably only truly nailed its integration with the Dreamcast (and later GameCube and XBLA) classic Ikaruga. For those unfamiliar with polarity, the premise is simple. No longer would the shots from enemies flying around the screen be considered an entire blanket for the player to somehow navigate their way through. The dozens, nay hundreds, of lasers or whatnot would still be a veritable minefield to be picked through, but the projectiles would come in two distinct colours, in Kyotokei they are red and blue. Your vessel has a polarity barrier, which Microforum have dubbed the “aura”, which can be changed at will from one colour to the next. This enables your ship to only be damaged by one variety of enemy shot at any one time. Rather than simply being designed around cutting down the amount of potentially hazardous pixels on screen, the twist is that bullets of the same colour as your craft can be actively pursued and collected. The standard use being a build up of energy in a special weapon, something Microforum have not strayed from, this time it’s a set of homing missiles. So on the face of it we have a quasi-homage, but considering the meagre amount of title bullet hell fans get to choose from, and the cost of importing the latest Dreamcast offerings, building a budget title on such foundations can be seen as a more than acceptable pursuit. Treasure’s pivotal masterpiece should, by rights, have kickstarted a slew of imitations that could have kept the genre alive, but the tide of titles unfortunately never came, with most that were released never getting beyond Japanese shores. So, up steps Kyotokei, aiming to catch an ounce of that magic in a condensed format. It’s already seen a release via WiiWare, to reasonable acclaim, but the question remains, how does it translate to a touch interface? There are two control schemes to choose from – touch and arcade. The former is based on touching anywhere in the screen, and in relation to that initial touch the craft will move and shoot as you swipe your finger. Note there is no separation between the two actions, move anywhere and you’ll shoot at the same time. The second control interface is that of a virtual analogue stick. Microforum seem to be well aware that the latter is less than effective and put a “recommended” note on the touch variant, which is to be heeded, as the virtual thumbstick is woeful. It’s hard to get any degree of precision, which is absolutely vital in this genre. No backstory is given, just an intro screen with a couple of slightly Westernised anime-style characters. You look to be riding a large bird of some kind, but story and sense is not what these games are about. Scrolling from left to right, shooting is also solely in that direction, save for homing missiles, thus it becomes vital to save them for the right moment, namely when a formation surrounds you. By rights, when you are encircled and a small opening on the right of the screen looks to be your escape route you should not have to rely on a weapon you may be saving for a boss battle, but the swipe of a finger fails to register past the left hand side of the screen, thus if your finger has started, or merely strayed, nearer the middle – a sound tactic given enemies begin to arrive from behind you from the second level onwards, the movement to the right may well be to little. You’ll hit the dead zone of the touch screen and you too shall be dead. Thus working out the formations of enemies is crucial, thankfully learning the patterns of when this’ll happen isn’t hard as there are only five levels to work your way through. Absorbing shots to build up the energy bar of the homing missiles is as satisfying as it’s always been in such games. It’s a balancing act of whether to rid enemies from your screen or allow them to build up an attack, knowing you can evade the enemy themselves as they move, to release much needed shots to empower your homing missiles. The implementation of the differentiation of the more powerful missiles is quite good, there is a real sense that letting loose with only a low bar of energy would be pretty pointless, but as it fills, and the screen does too, the fact that you lose all of it should you die is like a nagging devil on your shoulder, begging you to pull the trigger. They are obviously best saved, if possible, for boss battles, which are suitably hectic. They are not as inventive or grand as many would no doubt like, relying on large amounts of one colour and more accurate shots of the other, but they at least give the opportunity to fill your missile bar yet again by this approach. Evade, fill and fire being the set approach many will follow. If anything, the patterns of multiple enemies within the game itself have more rhythm to them than those of boss battles. Once you’ve got the patterns off pat you’ll be focussing on the chain scoring system, which necessitates the shooting of the same coloured enemies, four in a row, to notch one on the chain. This highlights a flaw in the fact that moving and shooting are simultaneously linked. Most who are adept at this genre beat the games easily and find the challenge in the rhythm of high scoring. Evading and firing become somewhat separated, and in Kyotokei, to be able to pick the colour of your opponents in order to get a good chain, you need to move around the screen, which so often appears to be impossible without accidentally destroying an enemy of the wrong colour or perhaps one you wished to allowed to build up a volley of shots to be absorbed. Worse still, the flurry of projectiles firing from your own craft can add unnecessary colour and crowd the screen when you’re trying to pick your way through a particularly devilish arrangement of shots. It is a budget title, and one that follows the path of tried-and-tested, but there is a sense that the template followed also contains a good degree of care with regards the patterns used and the implementation of the polarity system. Unfortunately the switch of auras isn’t quite quick enough, and with the hit box being off centre this can lead to some awkward moments. It worked reasonably well on the Wii, but the transition to the iPad devalues the chain scoring system and the dead zone in the screen becomes more of an issue once things become really hectic. With updates the latter may be fixed, but I fear the control scheme, linking firing and shooting, is finalised, which hampers this fun and frantic shooter, making it less of a worthwhile bargain basement shooter and more just a flawed port.

Microforum take a solid WiiWare title, that evoked sentiments of past greats, albeit in a simplistic budget manner, and attempt to port it over to Apple’s touch screen devices. The result looks as eye-catching and appears fun, initially, but the controls, of which there are two varieties, fail to deliver the same experience Wii owners have enjoyed. A lack of precision and loss of basic abilities, such as moving and shooting being separated, drag Kyotokei on the iPad down from budget gem to “it’s cheap for a reason” territory.