Classic Japanese horror in the vein of Onibaba 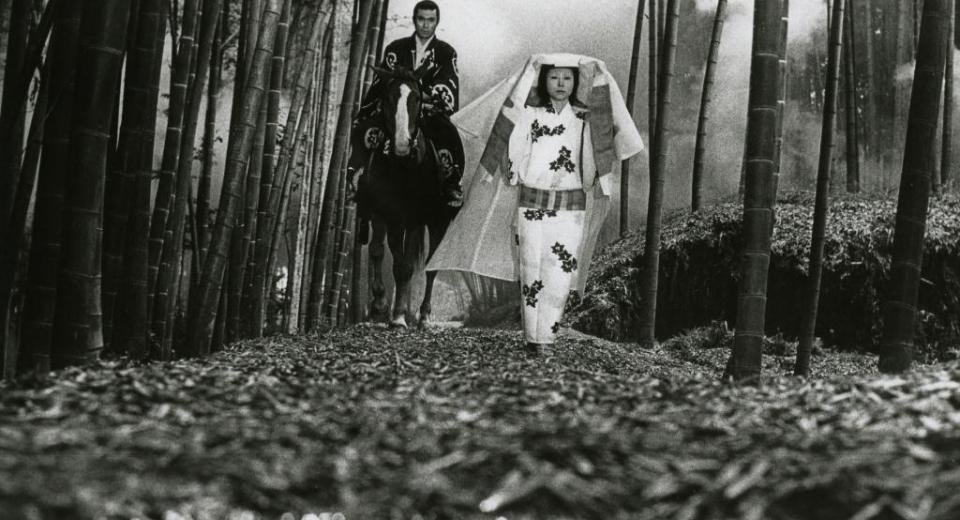 Continuing the releases of their Masters of Cinema titles, Eureka’s next is a supernatural horror from director Kaneto Shindô, the dark and atmospheric 1968 title Kuroneko, also known as Yabu no naka no kuroneko which translates as The Black Cat inside the Bamboo Grove. Revisiting similar themes from his breakout horror title Onibaba (1964), Shindô again explores sex, desire, oppression, class divide and social existence but this time in the guise of an overtly supernatural and eerily romantic tale that encompasses rape, murder, vampire ghosts and samurai.

The film opens up to an idyllic looking scene, a lonely hut by a babbling brook surrounded by bamboo. The camera lingers as figures start to slowly appear out of the grass, like shadows out of the dark. More and more appear, one stoops and drinks out of the brook and, still holding the camera at this distance, we can see they are dirty, warrior types; a band of lost samurai. One enters the house, the camera follows, it belongs to two women, one older, the other much younger, they are quiet and minding their own business eating when this man enters their home – shocked they look down in fear, more and more of the men enter the home. Then, suddenly, without warning they strike, tearing at the food stores, breaking everything to get to the food, the women, fearing for their lives try to escape, but they are trapped, surrounded and with slow resignation take stock of their fate – they are attacked, brutalised as one by one the band of villains take their turn, while the others, still stuffing their bellies, look on impassively; the camera and setting is now far more claustrophobic and concentrates on the onlookers while the struggling women cry and plead. Back to the long shot of what used to be an idyllic setting, as one by one the men take their leave, their number beyond twenty, as they sink back into the distance from whence they came – smoke bellows from the hut, it burns to the ground, it’s sorry inhabitancy along with it.

Shocked? That is about as powerful an opening scene as I’ve ever seen. And what makes it all the more powerful is the frame composition and the idea behind it all (granted you need to see further into the film to fully understand the implications of who, how and why). Shindô’s framing of the rapes builds so much in your mind, you are left in no doubt about what is going on despite not being graphic in its nature, it still gets under your skin and makes it crawl; the greed and destruction brought about by the samurai as they simply take what they want with no regard for property or person is startling and a clear indication of class divide and social commentary between the have and have not’s – this is expanded upon in scenes later in the film and is even blurred with regard to one character, but we’ll come to that later. The long shot showing the men leaving is utterly harrowing, especially considering the amount of men that leave the hut; the camera lingers and lingers and lingers. And they disappear into the reeds and bamboo as if they were ghost – poetic when you consider what the women are about to become.

A black cat enters the ruined domain and surveys the charred bodies, instead of running it starts to lick the blood from both of the women’s faces and necks (hence the original title of the film). Next thing we see is the younger woman tempting a horseback samurai; using his greed and baser instincts to lead him to a secluded spot where the older woman offers him drink; little does he know but he is now as lost as alone as the women were in their hut – he surrenders to them and has his neck torn open. The women have returned to the earthly plane as vampiric ghosts, vengeful spirits full of hatred against all those that harmed them. For they do not stop at this one samurai, they lead many, over and over, night after night each one to their doom. Shindô shows these unfolding scenes as a type of montage, the first is allowed its own pace, the following ones contain exactly the same images but are cut shorter and shorter showing the progress of time and the dominance of the spirits. Much exposition is given during these scenes about who the women were and what they were doing alone – they are mother and daughter-in-law awaiting the return of the farmer son/husband who was kidnapped and taken off to war by the samurai.

However just when we think we know where the film is heading, it suddenly veers off on a tangent: a peasant warrior is raised to the rank of Samurai after a victorious battle and is offered even more reward (including women) if he would slay the beasts that have been terrorising the lands of late – he agrees. The identity of this warrior makes for the ultimate twist on the proceedings and thus melds genres, ideas and loyalties. So what starts off as a supernatural horror becomes a love/lost Shakespearian tragedy and comments upon social evolution and society backlash. There is, then, an awful lot going on behind what, on the surface, is a man facing off against demons. The genuine anguish felt by our raised samurai is palpable when he realises what and, more importantly, who the ghosts are and what one in particular sacrifices for him. Juxtapose this with Samurai Lords who use their elevated station to subjugate those who are (in their eyes) beneath them and the commentary is even more evident. This latter half of the film is laced with tragedy in the most romantic sense of the word, for the relationship is doomed, and the final outcome inevitable. Spiced up with the appearance of an even more malevolent demon and horror turns to tragedy and devolves into pathos.

Grand ideas perhaps and maybe a stretch too far in terms of what Shindô was actually saying, but the clues are there if you have the stomach to watch. It’s not that the film is gory or too complex, but it is told with whimsy and ethereal moves which demand much from the viewer – this is not a spoon feeding movie, it’s a black and white, subtitled Japanese film, based on, and told as, folk law and, as such, is far more inaccessible than his earlier horror Onibaba which is far more explicit, both in its visuals and its storytelling motif. However, that should not put you off; the film is rich in its visual tapestry, look for the wirework, the majesty of the landscape visuals and the eerie dark sets inhabited by the ghosts. The score too is highly vibrant and evocative, the cinematography revels in sets drawing their inspiration from the stage (look for light and shadow, backgrounds that move in and out of frame and mist and smoke used for dramatic purpose). There is much to admire here. The story can be viewed as a simple rape revenge story in the first half and a ghost exorcism in the latter and it does works on those simple terms; but what makes it so much more is the depth with which the story is told, with the multi-layering to the rest of the story threads acting as icing on the cake.