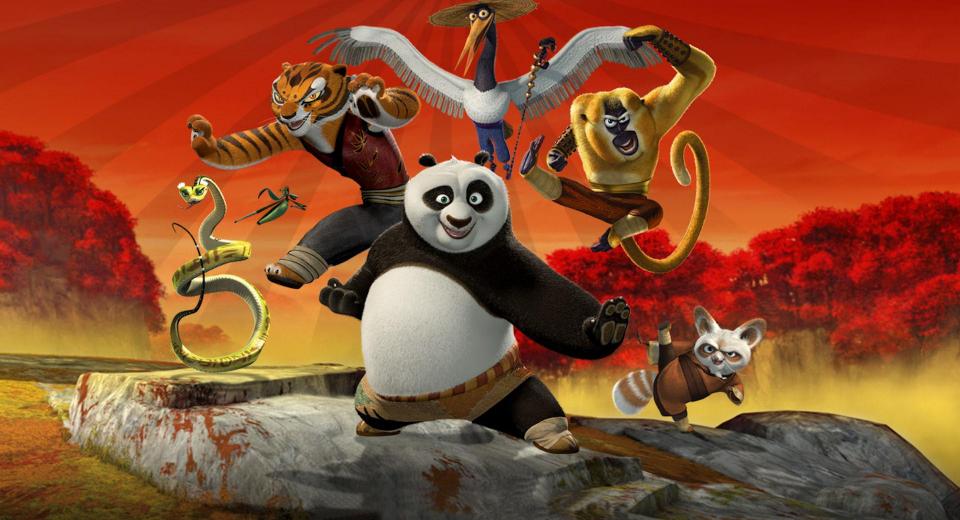 Incredible to think that I first looked at Kung Fu Panda in 2008, and amazingly, since that time, it has lost none of its sparkle and neither has my affection for it deminished, indeed watching it again so close to its sequel I was struck by just how good it truly is; so I present my original review of the film once more, before moving onto the all new 3D aspect.

Some film titles just don't inspire confidence. For me Kung Fu Panda was one. And when coupled with Dreamworks whose animated output has been somewhat less than consistent (for every Shrek there is a Shark Tail) my expectations for this latest offering were not high. Oh ye of little faith. For you see, Kung Fu Panda is a breath of fresh air and a quality film that uses a simple philosophy - it is very funny. Yes it's a 'kids' film, yes it's animated, but you know what I don't care, it is still one of the best film of the year in my book, striking a diametric chord with my other top choices. So sit back and enjoy the pure frivolous fun that is Kung Fu Panda.

Po is a panda born into a family of noodle soup makers that dreams he is a kung fu master. When Tai Lung, imprisoned for threatening to destroy the village, escapes, kung fu master Oogway holds a tournament to hand pick a skilled fighter to become the fabled 'Dragon Warrior' to ensure the valley's protection. Circumstances prove that Po is picked as the warrior and through a series of training and some inner self confidence the protection of the valley is assured. The plot is incredibly simple and draws from a thousand kung fu movies but that is not where the magic lies. The creators, all of whom have very few credits behind them, have picked out the essence needed to thread the story with meaning and then coated the whole thing in comedy; the resultant film is genius. Simple slapstick comedy combined with a witty script that is full of entertaining one liners and an overall sense of fun.

Being dreamworks there is plenty of voice talent on offer. As Po, Jack Black endears the character with a frantic sense of childlike wonder; a schoolboy crush on the Furious Five, an encyclopaedic knowledge of their exploits and daring do's but graced with an infectious enthusiasm that endears what at first is a frosty reception to genuine friendship. Black as a character actor has a rather limited range; frantic mostly with a hint of charm and slice of vulnerability; and here he manages to project that through the pixels and his personality bursts through. The character of Po works so well because it is Black that is voicing him; you can imagine him as a down trodden panda aching to be accepted and dreaming to be so much more. And once he starts to believe in himself there is little to stop him, no smug arrogance, just pure heart warming confidence.

Shifu the master training Po is voiced by Dustin Hoffman who does a terrific job of portraying frustration, exasperation and admiration also manages one of the funniest lines in the film. He too has a similar journey of acceptance and whose inner turmoil is calmed by coming to terms with feelings of old and accepting simple truths. His and Po's training montage ends with a superb fight that is as much about emotion as about action.

The Furious Five are voiced by Angelina Jolie, Jackie Chan, Seth Rogen, Lucy Liu and David Cross and whilst they are names to be fair they don't have much to do, lovely that Chan gets to voice though. Of the five it would be Jolie that gets the best journey being a tiger like Tai Lung she was almost shunned due to Shifu's cutting himself off and buried herself in her martial arts, neglecting feelings, emulating her master, and thus is harder than most on Po, particularly hurtful since she was Po's favourite. When she warms, her own journey, shorter though it is, following the same path as Shifu, it is immensely gratifying.

As Oogway, the founder of kung fu, Randall Duk Kim (best known as the Key Master from The Matrix films) gives a very understated performance, giving just enough pathos and gravitas to weigh the lines with meaning; his discussions about his choice or mistakes or spiritualism are delivered faithfully and without smirking and this side of the film plays host to some terrific symbolism.

And taking on the role of the evil Tai Lung is the Ian McShane. Using a very silky smooth, almost charming voice, think of part George Sanders as Shere Khan and Chris Lee as any part he's ever played and you'll get the idea, but full of cock sure menace. When he goes toe to toe with Black the verbal sparring comes in tune with the physical sparring. There are other recognisable voices coming in to fill the smaller roles and all acquit themselves admirably.

Of course the voices are only part of the story; the rest is the script. It took something like four and a half years to bring the film to the screen and a substantial amount of that was making the story as good as it can be; think back to the original Shrek, or the original Toy Story both had similar development times and a significant amount was for the story; it's why they work so well; and it's the reason Kung Fu Panda works so well; it is a stupendous script. The plot itself is almost throwaway being seen and regurgitated over the years in any martial arts film you care to mention and it is that familiarity that helps with the simplicity. Po wants nothing more that to watch his heroes as they battle it out to become the Dragon Warrior; but Oogway's picking of him was a function of seeing past the obvious to a true and noble heart. Once trained Po is able to draw on the strength of himself; the fact that he is a panda, naturally fat and thus able to use those strengths - unaffected by the nerve pinches, highly elastic body - to the best of his ability; there may be no secret ingredient in the soup but the secret ingredient of the film is humility and belief. These traits combine to give one very powerful message. And it is delivered in such an easy manor, comedy.

For you see, above all else this film is funny. So very, very funny. It is chock full of one liners that nearly every line is quotable; the slapstick humour is right on the money, every time. Many recent comedy films have a decent enough premise and do raise a chuckle or two but I can't remember the last time I laughed out loud at a film for years; and this film had me in stitches for most of its run time. If you have kids it's an even better time since they are falling over themselves and the enjoyment is ten fold. Everything the makers have put on the screen is worth it, there are no wasted frames. The film has a furious pace but is set at such a natural flow it never feels like it. Just like Shrek or Toy Story there is a perfect meld of sound and vision that never lets up even after the final credits and the closing scene of mutual respect and futures assured.

I really can't emphasise just how good Kung Fu Panda is; it has everything you want from a film and is terrific entertainment. An absolute blast that I can thoroughly recommend.