For you see, above all else this film is funny. So very, very funny. 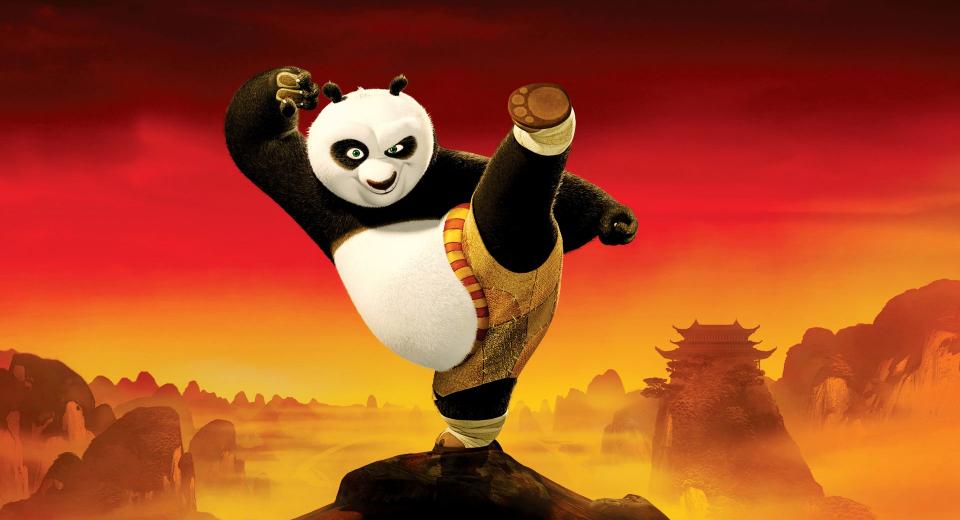 Po is a panda born into a family of noodle soup makers that dreams he is a kung fu master. When Tai Lung, imprisoned for threatening to destroy the village, escapes, kung fu master Oogway holds a tournament to hand pick a skilled fighter to become the fabled 'Dragon Warrior' to ensure the valley's protection. Circumstances prove that Po is picked as the warrior and through a series of training and some inner self confidence the protection of the valley is assured. The plot is incredibly simple and draws from a thousand kung fu movies but that is not where the magic lies. The creators, all of whom have very few credits behind them, have picked out the essence needed to thread the story with meaning and then coated the whole thing in comedy; the resultant film is genius. Simple slapstick comedy combined with a witty script that is full of entertaining one liners and an overall sense of fun.

Above all else this film is funny. So very, very funny. It is chock full of one liners that nearly every line is quotable; the slapstick humour is right on the money, every time. Many recent comedy films have a decent enough premise and do raise a chuckle or two but I can't remember the last time I laughed out loud at a film for years; and this film had me in stitches for most of its run time. If you have kids it's an even better time since they are falling over themselves and the enjoyment is ten fold. Everything the makers have put on the screen is worth it, there are no wasted frames. The film has a furious pace but is set at such a natural flow it never feels like it. Just like Shrek or Toy Story there is a perfect meld of sound and vision that never lets up even after the final credits and the closing scene of mutual respect and futures assured. Kung Fu Panda was never designed or envisioned for 3D and this disc is therefore a conversion – however it’s a conversion like Toy Story is a conversion – i.e. spectacular! Right from the very opening scene, Po’s dream, you know things are going to be something – this very stylised animation lends itself fully to the 3D realm with layer upon layer into the frame and plenty of negative parallax to further enhance the experience. Even the ‘flat’ character style is given a new sense of depth; look at how Po’s hat envelops his head, terrific stuff. Once we enter the film proper things only get better, look at the dimensionality of how round Po is, and how he sits within his room, look at the how far back through the window the background is. For a film that was never designed to be in 3D, the film always had a huge amount of 3D ‘pop’, now it is enhanced to really being you into the story – look at the choosing of the Dragon Warrior, how the confetti floats into and out of the screen, how the roof tops have dimensionality, how the crowds layer back into the screen. Tai Lung’s escape from prison was always a terrific looking scene with plenty of ‘pop’, look at it now; how big and round the rhinos are, how far the distance is to where Tai Lung is chained up, his escape fighting along the various levels now has as much into the screen as out and looks incredibly impressive. Indeed there is always something to draw your eye in every scene; the petals floating around in Oogway’s death scene, Crane’s beak sticking out from his face, the flame around Tai Lung as he lunges at Shifu, the distance overlooking the Valley of Peace, the golden rings spreading out over the same during 'Skadoosh'. So much to see and praise that I have found practically nothing to fault; ok it doesn’t quite have that absolute polish that Cars 2 or Toy Story 3 has, but they were meant to be 3D, Kung Fu Panda is a remarkable achievement and deserves a place amongst the best the format has to offer.

Of course the rest of the picture is, as it is in its 2D form, absolutely reference - first up detail, obviously defined by the computers pixel, but is so well defined as to be razor sharp, look at the background to get an idea of how intricate and delicate the detail is, aged stone to waving grass, quite astonishing; ok it never looks 'real' but it's not attempting to, however its definition is outstanding. Water too looks incredible.

Colours are bold and almost luminous especially the primaries, reds are vibrant, greens are lush and blues are striking, there is no bleed, wash, banding or posterization, just delicate shades and sweeping swathes. Check out the vibrancy of the fireworks against the sky blue during the Dragon Warrior choosing scene.

Brightness is set to give some deep, deep blacks (with the ususal 3D caveat) which give a mammoth depth to the frame, take a look at the prison to see what I mean, you could lose yourself, and it still contains plenty of detail going on in the shadows, again the prison scene best demonstrates this. Contrast is set to give astonishing bright whites, no boosting means no detail loss anywhere on the frame.

There are no digital compression problems, there are no original print problems (obviously), no banding, posterization or edge enhancement; in short utterly breathtaking image. Using passive technology I spotted no crosstalk though there were a few instances of slight aliasing, but nothing to get het up about. All in all a fantastic picture! I concentrate on the English Dolby TrueHD 5.1 surround track which demonstrates a spectacular sound field full of energy, subtly and enough bass to feel in the pit of your stomach.

Immediately the film starts you are awash with the sound field; the Chinese style percussion music bouncing around the room, the dialogue comes from the centre and the action is dispersed around the room to fit with the visuals. There is pin point accuracy and this is just a dream sequence. Once the film starts proper there are delights in store. Effects come thick and fast, some obvious; crowd shouts echoing; others more subtle; Tigress' dialogue moving from front centre to front right to rear right as she leaves the picture.

The demonstration of the Furious Five is excellently realised; in the arena it's loud and brash with sweeping effects and bold scoring, then switch to outside as Po tries to get in, you have all his wasted efforts and still the background emphasises the demonstration and its distance. The fireworks shoot upwards and explode with a crackle and thump above you! There is a full range and plenty of bass detail there are also plenty of LF effects from punches and kicks to some gorgeous rumbles so deep and sweeping as to leave a huge smile on your face; take a listen to the final Wuxi move, in what has become known as the 'skadoosh moment', that Po uses in the climatic battle; oh boy, reminded me of the Buncefield Fuel explosion, and is still the bass moment to beat.

It is a dynamic and all encompassing sound track that is at once epic and bold, but with subtly and finesse in the quieter moments. Clearly then a reference sound track and like the picture one to show of the benefits of HD in general and your system in particular. Even though it looks like there is a vast array of extra material, closer inspection reveals it to be rather less than stellar.
Inside Kung Fu Panda
Po's Power Play
Sounds and Moves of Kung Fu
Land of the Panda
So as you can see apart from the commentary and PiP sections this extras package is aimed pretty much at those who have yet to age to double figures, whilst they maybe large in number are tiny in content.

Kung Fu Panda remains an absolute triumph; a seamless melding of picture, sound and story in the greatest tradition of moving pictures. It appeals to both young and old alike working on many different levels, but over and above everything else it is a funny, funny film. The story might not be anything particularly original, but when it is told with such verve it does not matter, even after many repeat viewing there are still elements to enjoy and when placed alongside its sequel, is clearly a far superior film, in every regard.

As a 3D Blu-ray package Dreamworks demonstrates just how good this format can be; the 3D picture is quite excellent both in terms of its 3D environment, detail, colour and contrast and is backed up by the same powerful and enveloping sound track that is still as much a reference as it was in 2008. Bundle this with the already reference 2D Blu-ray disc that has been available for a number of years and, despite the light extras, not only do you have a an excellent package, but a fully future proof buy; highly recommended.