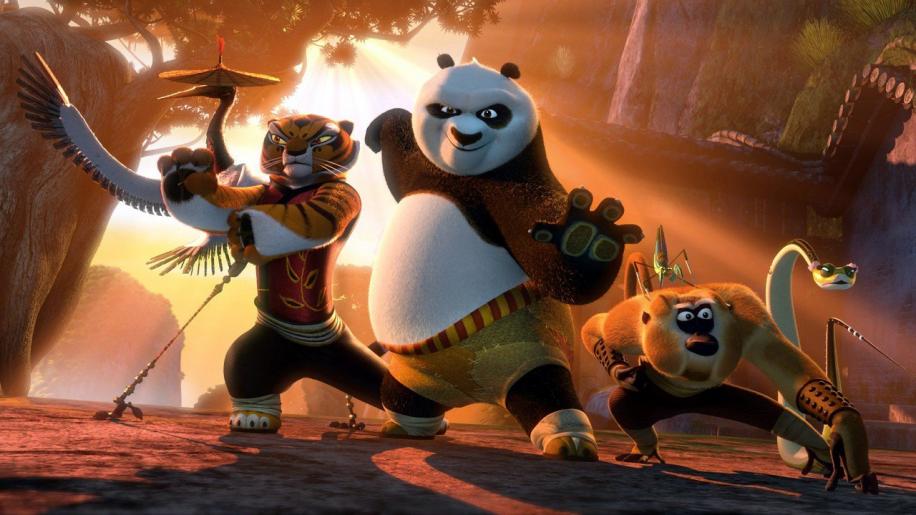 Kung Fu Panda is a masterclass in film construction; it is not an original story by any stretch and there is a huge amount of predictability, but what it does have going for it is an easy narrative, exceptionally well told and, above all, it is immediately entertaining. The story is always told from Po’s point of view, the events that unfold have a predetermined nature as if Oogway himself defined the path; each character interacts with the next to lead the story to its inevitable conclusion (“One often meets his destiny on the road he takes to avoid it”) and each character is rounded out and becomes part of the whole – while the story itself, frivolous as it seems on the surface, contains plenty of depth about character and inner-worth, while at the same time is eminently comedic in nature – it is a joy to watch. It is as much about Shifu’s struggle as it is about Po’s and their understanding of each other is one of the highlights of the film. It is rare when so many elements combine to form such a whole, Toy Story had it, Shrek had it and Kung Fu Panda has it. The fact that it was a perfect vehicle for the persona that is Jack Black was the icing on the cake. Its success has lead to the inevitable sequel and expectation was high, for as well as reuniting all the cast from the original film, there are a healthy amount of producers, writers, art directors and other crew members coming back on board hoping to recreate that special spark that made the first Panda such a success. In discussing the film I’ll be looking at elements from both the original outing and this, tonight’s feature, which may give away ideas behind the narrative, I’ll try to avoid spoiling as much as I can but I feel it best to pre-warn those of a sensitive nature that there may be the occasional plot point revealed in the following review.

One of the beauties of the original film was the time spent with the characters, time to get to know a little about them, what makes them tick, and this invested time means we, the audience, identify and empathise with their decisions. Since the main focus is about Po and his journey, we spend the most time with him, the initial dream opening sequence, while defining the supporting roles and laying out some of the narrative (as well as being very funny) is all about Po – his dreams and aspirations, while the film whole tells the story of how he realises them. And so, after becoming the Dragon Warrior, he now lives and trains with the Furious Five under the direction of Shifu in the temple above the Valley. Though all is not so peaceful in the rest of China. The opening prologue of the sequel, animated in a similar way as the original to help with continuity (a theme that will consistently return throughout the run time) tells the story of how fireworks were discovered, how the ruling peacocks cast out their son due to his violent actions against pandas after he was told by a soothsayer that a ‘black and white warrior’ would bring him to ruin if he continued in his pursuit of harnessing gunfire. Immediately from this prologue we can tell that this film is heading in a very different direction to the original. Firstly it does not open with Po, secondly it tells the story of characters we haven’t encountered yet, thirdly the violence is nowhere near as comedic and lastly that it is a much, much darker narrative. Indeed this darker, more disturbing narrative is prevalent throughout the film as we are no longer discovering through Po his abilities and watching him grow, but rather discovering how he became Mr Ping’s son and, more especially, the villain who orchestrated the horrific events that lead thereto.

The jumping off point for the whole sequel is the short “There is no secret ingredient” scene from the original film, where the makers tease the audience with the father/son/adoption element, but rightly focus on what was significant for that film, since it was neither the time nor the place to delve into such emotional turmoil. So the decision was made to explore Po’s roots with an entire film dedicated to finding out where he came from. However, since this is a Kung Fu film it needs its fair share of action and, of course, an antagonist. In the original film Tai Lung was a terrific character, as rounded out as Po himself and the makers kept his story threaded throughout the narrative only revealing his motives in the climactic battle scene. Shen, the main villain here, is a very different character; his motivations are explained in the prologue, and thus all his subsequent actions have nothing to reveal; he is simply a spoiled child, wanting power, who continues to make bad choices even though he knows they are wrong – he is neither as complex nor as imposing as Tai Lung as he relies on weaponry not cunning or his own skill to further his agenda. Gary Oldman voices the character and imbues him with enough pantomime villainy to give a certain amount of boo-hiss-ability, and whilst the script tries valiantly to give him that background complexity to broaden his character, he has his own father issues to deal with, he only really comes off as a wanna be villain. We are, of course, in a children’s film, so we can’t expect to see depraved madness, which is what the character really needs to set him apart. Tai Lung managed the perfect line between villainy and desire, but he was a very different kind of baddie, driven by pride and desire, Shen is unhinged and distinctly evil, he’ll shoot his own ships, decimate his own troops, sacrifice sure footing to take the winning blow – but despite all this he still comes off as a cartoon, his taunting of Po’s heritage notwithstanding.

Which brings us to Po himself. Since the original film followed Po on his journey to becoming the Dragon Warrior, we pretty much know all we need to about his character, thus going back to a time before those events is a logical step – and that discovery is what this film is all about. Jack Black is once again voicing Po, now, as I’ve stated before, Black only really has one acting style, the down trodden good guy with a heart of gold – in the original film the character and the style melded to a perfect union. In the sequel that aspect is no longer needed, Po is no longer down trodden, he’s the Dragon Warrior, revered in his home town, loved and adored by everyone, on a equal footing with the Furious Five and treated with respect and kindness by his Master, Shifu. The story this time around is not one of growth in the traditional sense, more one of regression and acceptance; and in trying to force the Po/Black persona into such a dark story something doesn’t sit quite right. Po becomes something of an annoying comic member rather than the comedy focus and whist there are some great one liners (“My old nemesis ...”) most fail to hit the same stride as in the original film.

Po is not the only character to have gone through a transformation in character, Tigress, voiced by Angelina Jolie (who now, inexplicably, gets second billing) has a chance to show a softer, more sensitive side. This works well with her character as presented in the previous film, there she was hardened against emotion by Shifu and his own emotional turmoil and since that has now passed it is only right and fitting that her more sensitive side could begin to shine. She is a natural leader, even Po, the Dragon Warrior, looks to her (though that is more from adoration) and when they confront each other his emotionally crippled self struggles to confide; but where Po’s seems forced, Tigress’ seems natural. So while I don’t really like the way Po’s character has changed in this outing, Tigress’ works well within the confines of the film.

Unfortunately all the rest of the supporting characters have very little to do, including those in the Furious Five. In the original there were many small scenes incorporated to give each of the Five some inclining into their personas, be it walking up the mountain path to the temple, chatting, night time in the temple as Po laments Shifu’s decision, Po cooking the ‘secret ingredient soup’ of even Shifu talking about Monkey hiding his cookies – these and more expand upon the characters, there is virtually nothing like this in the sequel; all the emphasis is on Po. Now, one could argue that is the point of the film, but then so is the original, but that managed fine. Even Shifu, who was such an integral character in the original is given nothing more than a cameo, three or four lines at best – and his ‘inner peace’ scene is fundamental to the story, but we’re not privy to his instruction or teachings, like we were when he was teaching Po about Kung Fu, Po ‘discovers’ this himself. By shunning these characters the makers are cutting out a vast amount of background lore; essentially halving the emotional involvement of the audience – remember how distressing it was to see the Five defeated by Tai Lung, and how this affected Po, there is nothing like this in the sequel, save them being captured at gun point by Shen, but since there is far less involvement, our emotional connection is far, far less. All this is to the film’s detriment and after such an emotional high of the original, it came is a disappointment to me.

Now, I’m aware this is sounding all rather negative, in truth there is much to admire about the film. Its animation is a step up, again, for the franchise; the original was bright, bold and vibrant, the sequel has tempered this slightly, giving a more ‘realistic’ tone to the colouring, textures and particularly with the lighting. The animation remains as stylised but has even more fluidity to the character and camera movements – this makes watching the film very enjoyable for eye candy. Also, the story is a logical next step and it does try valiantly to remain both comedic and emotionally involving. And whilst both those elements are catered for I felt that it was reaching for the stars by continually adding to the ladder by taking rungs from the bottom, i.e. trying extremely hard but ultimately not going anywhere. Is it a good film? I’d have to lean towards yes. Is it entertaining? In the end I’d have to go with yes. Is it a spectacle? Absolutely. Is it as good as the first film. Never. Is it a worthy sequel? On balance I’d have to go with yes. Will I spin it again? Many times. As many as the original? Never. Take from that, what you will.