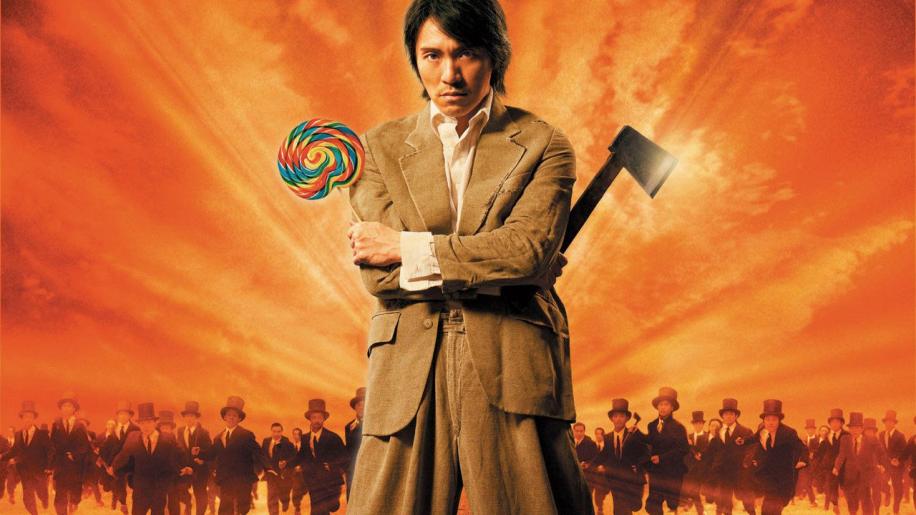 Set in 1920s China, Kung Fu Hustle is the latest action comedy from Hong Kong Director/Star Stephen Chow. He plays Sing, a wannabe gangster. He and his chubby sidekick (Lam Chi Chung from Shaolin Soccer), want to be members of the fearsome criminal fraternity, the Axe gang, and proclaim rundown Pig Sty Alley to be their first official 'territory' to try and impress them. However, Sing's attempts to intimidate and extort money from the locals are comically futile as this particular shanty town contains some rather extraordinary kung fu masters. Unfortunately for the locals, Sing's meddling attracts the Axe Gang's attention and they attempt to seize control of the locality by force, leaving him caught in the middle. Three years in the making, Kung Fu Hustle is a spectacular, clever film with first class effects that is both a 'wuxia pian' (a heroic tale) and a full on comedy. It's a mix of genres but this is no mongrel, it's a pedigree pup with superb directing, cinematography and editing deceptively hidden by layers of wacky slapstick and spoofing. The set design is also first class with real attention to period detail that must have taken some skill and big bucks to recreate. The 'zero to hero' storyline is predictable even down to the romantic yearnings of the lead, and it relies heavily on classic Chinese martial arts tales and the Shaw Brothers films for material, but the execution of the plot is something else. The story kicks off (literally) at a police station where we are introduced to the ruthless Axe gang, and then a quirky credits sequence with tuxedoed mobsters dancing with axes eases us into the film. So far, so good, but nothing too outré. The 'anything goes' nature of the film is only revealed when we meet the inhabitants of Pig Sty Alley, a real bunch of nutters! From this point on the action swings back and forth from martial arts batterings to Looney Tunes style cartoon capers. Chase sequences pop up with people zipping along like Wile E. Coyote and the Roadrunner, and baddies are punted through the air like rugby balls with accompanying over-the-top sound effects. These sight gags made me laugh but some might find these bits too childish and distracting; if so, nevermind, there are plenty of other things to relish. The star of the show for me was 'The landlady' (Qiu Yuen) a real comic creation - kicking ass in her dressing gown, hairnet and rollers, Dot Cotton style fag permanently drooping from her mouth. Chow himself is great to watch but he wisely lets other actors grab plenty of screen time, many of whom are real, albeit ageing, martial arts stars such as Wah Yeun and Siu Lung Leung. They're a pleasure to watch and are very funny, which I suppose is the best compliment you can give to an actor in a comedy.

The carnage and collateral damage in the fight scenes are quite splendid in range with walls being demolished by one punch, people smashing through buildings, screams turning into mini hurricanes; it's everything you imagined Marvel superheroes getting up to when in a bad mood. The free-for-all brawls are fantastic and make the Matrix sequels' burly brawls look feeble. Even the wire work is good, and is thankfully used sparingly, as that is one aspect of modern filmmaking that really gets on my wick (how can something so blatant and fake be considered stylish? Bah!) With Kung Fu Hustle Chow has taken the martial arts genre and turned it on its head. I enjoyed it a lot more than I thought I would, as I usually find martial arts oriented films, comedy or otherwise, quite tiring and repetitive (are you listening Jackie Chan?) but this had a certain charm that kept me smiling. Sure, you'll have seen it all before and it rips off, sorry, pays homage to at least a dozen other films, but it does it with such gusto and élan. It's a completely bonkers, entertaining romp - buy it, grab some brews, shut the curtains, crank up the volume and soak up the fun! Great Stuff!