Don’t expect too much and you won’t be disappointed. 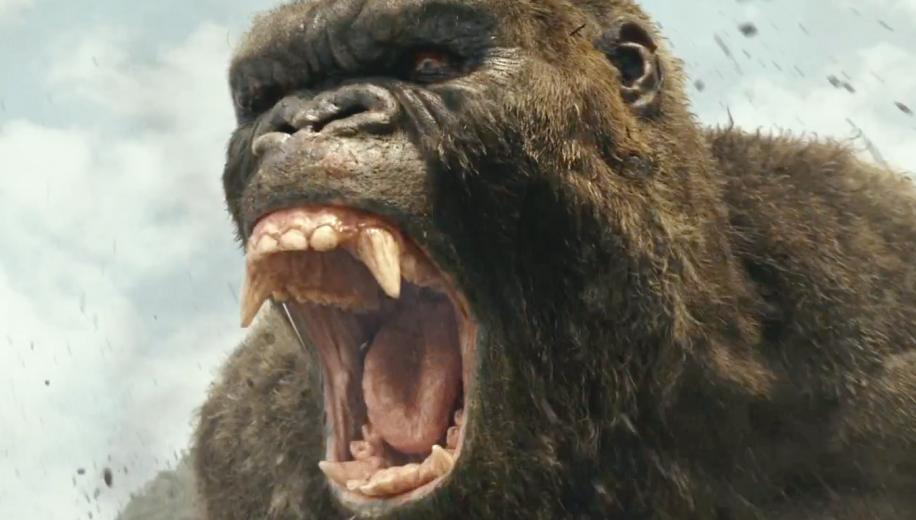 Is that a monkey?

Kong: Skull Island, apart from the names in the title, has little to do with previous Hollywood incarnations of the iconic ape; indeed, it is the second in an expanded ‘monsterverse’ of films that was kick-started by 2014’s Godzilla. So gone are the explorers trying to capture the beast and bring him back to New York, in favour of a jungle adventure on the ape’s own turf, where gigantic creatures roam and man is the prey. Sort of. Dynamic new director Jordan Vogt-Roberts’ vision of Apocalypse Now with monsters works very well in the action stakes, but suffers a little with the broader brush strokes of characterisation and political satire and, as such, comes off more a ‘Saturday morning picture’ than anything attempting drama. It does excel when monsters clash, but the narrative to hold the set pieces together does feel rushed and it wastes its on-screen talent in favour of the next monster.
New satellite imagery identifies a hitherto unidentified island and at the end of the Vietnam war but with the Cold war escalating, America agrees to finance an exploration expedition backed up with military might and world weary warriors, who’d rather be home than on one last mission. A quick montage of personnel later and we have all our protagonists only two of which will have anything like character, the rest being cliché all the way. In fact the whole film is cliché regarding story, editing, music and never knowing when to end. That isn’t necessarily bad, indeed the pacing of the piece rockets along, it’s just that there is very little meat to the bones – so while the film is a dumb action romp, aside from following up a new franchise, there is little here to endure. So, check your brain at the door, and revel in the spectacle, because that’s all there is. Despite being a 2K upscale the image on display is a fine example of how 4K can improve over the 1080p picture. Detail is incredible, from skin texture (hair, sweat, pores, stubble), which is stunning on the indigenous peoples intricate decoration, to fine stitching in the clothing weaves, to crisp bark on trees, to the glorious panoramic shots of the island. The GC proves it’s no slouch either, check out Kong’s close up with Weaver, or how water has individual droplets. There is a slight, but discernible upgrade over the 1080p image in this regard.

When you take into account WCG and HDR the 4K picture shows further improvement; there are colours in sunsets and within the digital grading schemes (particularly in the Kong graveyard, where the greens are both subtler and deeper) that are simply not available to Full HD. Check out the fires in Kong’s ambush, how the napalm flames are so much deeper, how they are pin point sharp against the blackness of the jungle. Black itself is incredibly well realised, with deep foreboding shadows that really push the pop of the image. Blacks never crush, while whites never clip; skylines are crisp against the foreground.

The source material is pristine, there are no digital issues, and the post inserted grain gives a decent texture that fits in with the time period in which the film is set. The Dolby Atmos soundtrack is out of this world! Right from the off, during the opening credits the effects of the dogfight between the two aircraft, with engine noise and particularly the machinegun fires is an exercise in surround envelopment brilliance; the craft move around and above you, the gun shots come from every direction and when they crash you are ducking for cover. And it only gets better form there; whether you are in the middle of a Kong skirmish with an octopus (water splashing everywhere) or sitting inside a helicopter, walking through the jungle with a monster spider walking above you, there is always an effect to place you within the centre of the action. Dialogue is always clear and precise and never lost in the mayhem. The score comes thick and fast and extremely well layered into the mix, several times songs are used to fill the room, only to become part of the scene by shrinking into the picture. Bass is phenomenal, being tight and controlled, but also subterranean when needed; Kong’s growls, the ignition of the napalm, the chest thumping, the crashing of monster against monster, the helicopter rotor blades – the sub always has something to do. An amazing use of the format, which is available on both the Ultra HD and the Full HD Blu-rays. Disc 2 – Blu-ray
Audio Commentary – As above.
Creating a King – Two features entitled: Realizing an Icon (12 minutes) and Summoning a God (13 minutes) that look at what went into making the creature as we see it. The former concentrates more on legacy and mythology, and the ideas behind this story, while the latter looks at the innovations and design of the film; both contain plenty of interviews and film clips.
On Location: Vietnam – A brief six minute look at the stunning landscape of Vietnam and what went into filming there, a first for a major Hollywood production.
Tom Hiddleston: The Intrepid Traveller – 7 minutes with the actor in Hawaii, Vietnam and Australia in a, sort of, video diary.
Through the Lens: Brie Larson's Photography – 2 minutes of Vogt-Roberts gushing over pictures that Brie Larson took on set while in character.
Monarch Files 2.0 – Spoof documentary from the Monarch organization which provide an account of the film.
Deleted Scenes – 4 minutes of scene trims. Kong: Skull Island is the second in the ‘Monsterverse’ kicked off by Godzilla in 2014. It is little more than a dumb action movie with all the typical clichés to boot, even though it dabbles with socio-political satire and character drama, it fails to capitalise on either and ends up wasting the on screen talent because of it. The effects are top rate, the action is outstanding and the sound is immense; made by a talented young director in Jordan Vogt-Roberts who revels in pop-culture and the chance to bring a new guise of Kong to the screen. Don’t expect too much and you won’t be disappointed.


As a 4K Ultra HD Blu-ray package, this set from Warner is pretty good; the picture, even from a 2K DI, is stunning, with top notch detail, excellent colouring, pure blacks with plenty of visual pop. The Dolby Atmos surround track is demo all the way, with effects coming at you all the time and a bass level the rocks you to the core! The extras are a little light, but what we do get is reasonably informative.