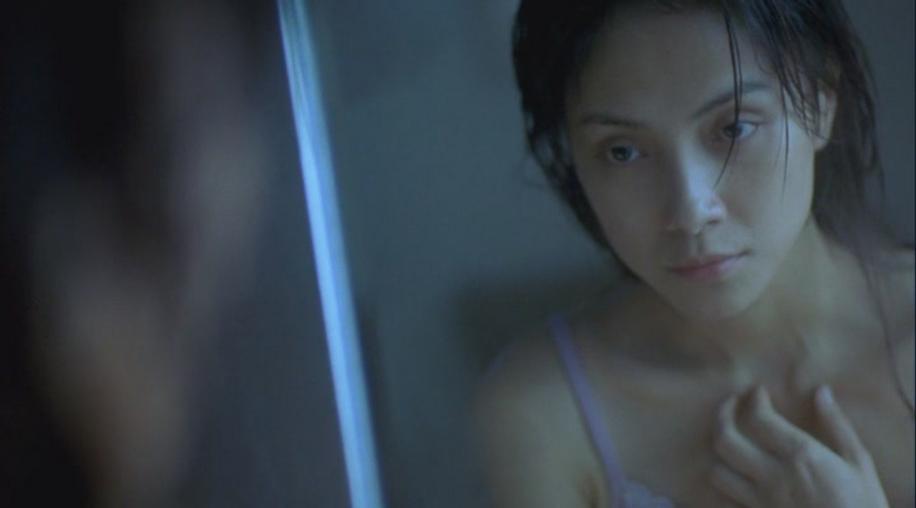 Another entry in the Asian horror genre, Koma was made in 2004 and gained a UK theatrical run last year, meeting fair to middling reviews. Made by Chi-Leung Law, the film sees rich-chick Ching (a super-sexy Sinje Lee) stumble drunkenly onto the scene of the latest victim of a ghastly organ-stealing campaign of terror, the wedding she is bridesmaid at suddenly paling into insignificance as a kidney-gouged girl crawls bloodily towards her from an ice-bath. Fingering from a police line-up the girl she thinks is the culprit - the scarily intense, yet hauntingly attractive Karena Lam as the troubled Suen Ling - things only get worse when she discovers that her boyfriend has actually been seeing this other girl behind her back. One nasty incident later sees the two girls drawn into a circle of bizarre friendship, tit-for-tat stalking, mysterious mind-games and more organ-snatching, the plot gleefully throwing you a curveball every twenty minutes or so. Emotions are stretched to the limits, an air of menace permeates much of the proceedings and, as ever, the police investigation into it all makes about as much sense as any attempt at a serious plot synopsis. But, Koma is a little different from the average Asian shocker, folks. There is some real style at work here, a pace that ebbs and flows under its own steam with an uncanny knack for tripping you up just when you'd thought you'd got it all sussed, and a taut narrative that packs incident after incident - a nightmarish visitation to Ching's bedroom, some expertly handled stingers (usually at the wheel of a car) and a cloying sense of nothing being completely as it seems keeping the attention riveted. It is also quite refreshing to see a film in which the heroine is shown throwing up on-screen (twice, I think) and even sitting on the toilet. Hollywood, even at its grungiest, would hardly stoop to such real-life routines.

But, even though Koma makes a valiant attempt to step away from the conventional genre staples, it cannot help but conform to certain well known parameters. Once again we have a poor young female dragged through one wretched situation after another, coming to doubt her own sanity and the intentions of those nearest and dearest in the process, as only one grisly avenue seems left open to her. We have only to look at the likes of Ju-On, Ringu, Dark Water, The Eye, Acacia and The Red Shoes to see the format for this sub-genre of tormented psycho-drama, but Koma is still a crafty and assured piece of film-making from a director who certainly knows how to create mood and atmosphere and coax some vivid performances from his two leading ladies. Whilst the plot may not be that inventive and a couple of the scenarios feel overly familiar, the film is always engaging and contains a handful of terrific shock moments that work purely because of the serious tone effected - one of which also serves as a brutal reminder not to use your mobile phone whilst driving. The deep dark malevolence of twisted souls and misguided motivations has a consciously Hitchcockian vibe, the film stuffed with hidden agendas and subterfuge, and an excellent ambiguity of trust for virtually everyone. The camerawork is sublime, too. We have some marvellous gliding zooms and involving tracking shots, lots of intriguing angles and consistently great compositions of even the most static and mundane of subjects, like two people just talking in a room against a set of drawn blinds. Park has obviously studied the masters - Dario Argento's deft visual manipulation is clearly evident - and this beguiling use of an ever-roving camera lifts Koma out of the stale, tried and trusted approach that would have left the film wallowing within the confines of the distinctly average.

A strange element that works in the film's favour - and yet should go totally against it - is the maniacal and gothic score by Chan Kwon Wing. But go on, have a listen. What does it remind you of, then? Well, to put your mind at rest, almost the entire score has been lifted rather blatantly, lock, stock and barrel from James Newton Howard's fantastic music for Shyamalan's Signs. Or, to put it more specifically, the main titles, the resounding final confrontation and then the cathartic resolution from Howard's score. Here, that striding, dominant and heart-lurching piano, percussion and violin-led crescendo is used numerous times throughout the movie, with only the most miniscule of variation offered between each rendition. But the thing is ... I loved the score for Signs and, whilst I cannot condone such plagiarism, I loved hearing it in this movie, as well. It adds a tremendous amount of power and suspense to the scenes that is pounds over, its relentlessly unnerving quality capturing the edgy mentality of the characters and the scenarios they find themselves in. It is a pure steal, I know ... but then again, the film itself lifts enormously from Hitchcock's themes and motifs, so utilising the same homage-rife musical aggression that Newton, himself, crafted from the Fat Man's regular composer Bernard Herrmann doesn't seem so sacrilegious.

A tense and well-executed police ambush for a suspect in a public toilet brings about a delicious new string of events, and the third act sees some crucial role-reversals add a further frisson to the disturbing mix. It is true that many Asian horrors let the cat out of the bag very early on, and even Koma panders to that formula as we approach the axe-swinging third act in full knowledge of who is who and exactly what the stakes are. But Law still manages a few wry asides the rock the visual norm - for instance, it is clever to see the victim, rather than the villain, wielding the sharp-edged weapon and going on a door-hacking rampage for a change.

I must make mention of the end credits, too. I don't think I've ever seen so many company thankyous dished out before, and the credit for the Tea Lady is an absolute first! The English subtitles aren't as bad as on many other releases, but they are still a grammatical and contextual minefield of misnomer, misinterpretation and missing words. But, hey, true fans of Asian movies are used to this. The un-skippable commercial for toothpaste at the start of the disc is a new one on me, though!