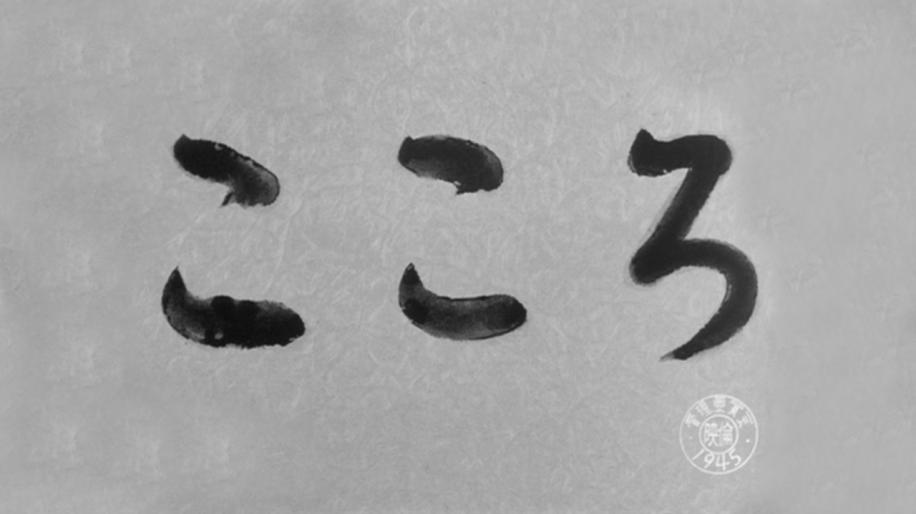 Let me first admit that I am unfamiliar with the original novel by Soseki Natsume on which this film is based, but clearly the author had a marked effect on the director of this piece as he went on to make two other cinematic adaptations of the scribe's works - I Am a Cat (1975) and 10 Nights of Dreams (2006).

Finishing the double bill of Kon Ichikawa films brought to us by the Masters of Cinema range is Kokoro. Unlike its co-release of Alone Across the Pacific, the absence of Ichikawa's wife Natto Wada as a writer on this project is one of many key differences. By releasing these two films at the same time, Masters of Cinema have sought to not only bring lesser known titles to a wider audience, but also to display in some small way the eclectic nature of the director's output. With the pair being divided by a mere eight years, it is quite startling to note the differences between them, which at times make them seem almost from separate centuries. Alone Across the Pacific was made the year after the events it portrayed, seared the screen with beautifully rich colours when they were called to be employed (though much of the film is intentionally muted which merely served to heighten the bold sunsets etc when they arrived), had an original aspect ratio of 2.35:1, a run time in the 90 minute ballpark and an uplifting message in its story. Kokoro on the other hand is stark in its black and white photography, is set some 43 years prior to its release, comes to the screen in a 1.37:1 ratio and offers no simple answers or profoundly optimistic morale boosting message.

Whilst these two films are inherently different in terms of narrative, they share the obvious key component of the same director. It would be wrong though to mark these seismic shifts from what appears to be one style to another as a progression of Ichikawa's directorial style and personal leanings. The varied nature of the stories he has brought to the silver screen over the years prove him to be capable of telling almost any tale at any point. It is one of the reasons he is so admired by so many; his back catalogue swings between extremes and has a variation to it the likes of which few other auteurs can compete. What can be more easily analysed is the timing of the films and their place in particular periods of Japanese cinema. Whilst Alone Across the Pacific was a work of the early sixties and revealed a changing ethos behind a new generation, fresh with rebellious thinking and open emotions, Kokoro sits within the realm of those stories that seem almost unbearably tethered as post war pieces. It is only once we get a decade or so past the end of World War 2 that Japanese cinema starts to turn the corner towards what we in the West would call modernity. Most of these tales within the period would tell us of duty and structure. Weaved in amongst these themes, there would obviously be love and betrayal and all such outpourings, yet they would be very restrained both in the language used and the style in which they were to be brought to life through the lens.

The film itself tells the mysterious tale of a man named Nobuchi. He appears fairly normal - married and approaching middle age, yet he holds secrets back from his wife Shizu. He visits the grave of an old friend, Kaji, alone; the initial spark that brings us into this couples tense relationship. He is unable to explain why he is so distant from his loved one and also unable to allay her fears that there is something wrong within their marriage. It is worth making a point about the translation of the title, which basically means the heart. Like the emotions of the human heart, the twists and turns of the story rarely follow completely logical paths, instead falling halfway between sound reasoning and impetuous action. With the grave of his late friend being the catalyst behind the viewers questioning of Nobuchi's aloof nature, it also brings with it the question of why it is significant and how Kaji came to die. With marital tensions rife, the sole interloper through which the audience is allowed to gain further knowledge of proceedings is a young man named Hioki. He is introduced to us as a rather plain individual, neither interesting nor uninteresting but simply a directorial tool - something he progresses beyond by the end of the film.

This is primarily a tale of duality in many ways. With no one person being able to fulfil the needs of another, each must instead find a third party through which they can gain knowledge and explore their own emotions. Hioki latches onto Nobuchi as his sensei - a word that is oft misunderstood in the West. Whilst it can basically mean master or teacher, it is not always used in such a formal sense as that of structured learning, as here it is merely used by the younger man to denote that he respects his elder and wishes to learn more of life from those with more experience, thus one who teaches in such a manner is a teacher. Nobuchi shows little inclination to give out sage words as he is so clearly troubled by demons of his own, but comes to recognise that Hioki can be a third party to the restricted world of his marriage and perhaps aid him as his confessor - someone he can entrust with his tale of woe without having to involve his wife. We step back in time to see Kaji and Nobuchi's life prior to love, death and marriage. Kaji is as much a troubled soul in his youth as Nobuchi is later as an older man, having buried himself in his studies, foregoing a modern life in favour of a spiritual path.

Like the use of flashbacks in Alone Across the Pacific, it is through these moments that we are able to gain a greater understanding of the characters and what is going on at present. Certain themes recur continually and there is an almost inescapable feeling to the story once it is viewed several times, as if Nobuchi's fate was sealed at a key point in his life - the time of Kaji's death. It is a story of learning and acceptance of self. Hioki tries to learn from Nobuchi, yet for all the supposedly wise man's books, he isn't able to fix his own marriage or purge himself of the ills that plague him. Kaji, similarly is shown to be a young man bent on a life of spirituality and is also seen constantly buried within a book's text, deep in thought, yet when he meets an aged priest by the roadside he is unable to hold even a simple courteous conversation with him; he too is now under such emotional strain which he is unable to solve by reading countless pages of his peers' wise words. The simple truth gained seems to be one of moderation and communication - no man is an island and fixating on another's emotions or words can never truly benefit the individual.

What is especially pleasing is the way in which Ichikawa goes about weaving this tale of doomed lives. The duality is a line traced through the entire story, both in terms of character pairs and the world in general. The events of the final year of the Meiji Era are of particular note in this regard. There is a sense that a ball has started rolling and that whatever may come, it cannot be stopped. The tides are turning and whatever lay buried is brought to the surface with the death of the Emperor and the following suicide of General Nogi - another pair inextricably linked in fate to one another. The circles within circles are countless and this film, though straightforward in narrative, has layers that can be interpreted in many ways. The wording on the back of the DVD asks “Why does Nobuchi visit the grave of his old friend Kaji? Why is he so secretive with his wife Shizu? And how does Nobuchi's friendship with young student Hioki - for whom the older man acts as reluctant sensei - relate to his time with Kaji?”, but even once these questions are answered to some degree, they only lead on to more that are less easily tackled.

The composite parts of this film are all to be applauded. There is a gentility to the direction, and the slightly lengthy running time, considering there are moments of little dialogue, is perfectly in keeping with the tone of silent reflection. The acting is never less than believable, as it should be, given the pedigree of those involved. Masayuki Mori (Nobuchi) has the majority of the weight on his shoulders but he carries it well and one would expect little else from a man who has appeared in numerous Kurosawa outings, as well as two previous Ichikawa works. Michiyo Aratama is in an early role of her career but it isn't hard to see why the actress would go on to star in many large Japanese films, such as the Human Condition trilogy, and opposite stars as grand as Toshiro Mifune himself. In short, whether you consider it an allegory for the changing of time in Japan or simply a tale of complex learning and relationships, love and redemption, it is a film that yearns to be seen not just once but numerous times in order to truly appreciate the subtlety of themes and mirroring of fates. It is not necessarily an easy watch in terms of the emotions explored, and at times the waters can be a touch too muddied, but nevertheless it rises above such shortcomings and gives the viewer food for thought even after the closing credits have rolled. A contemplative experience.