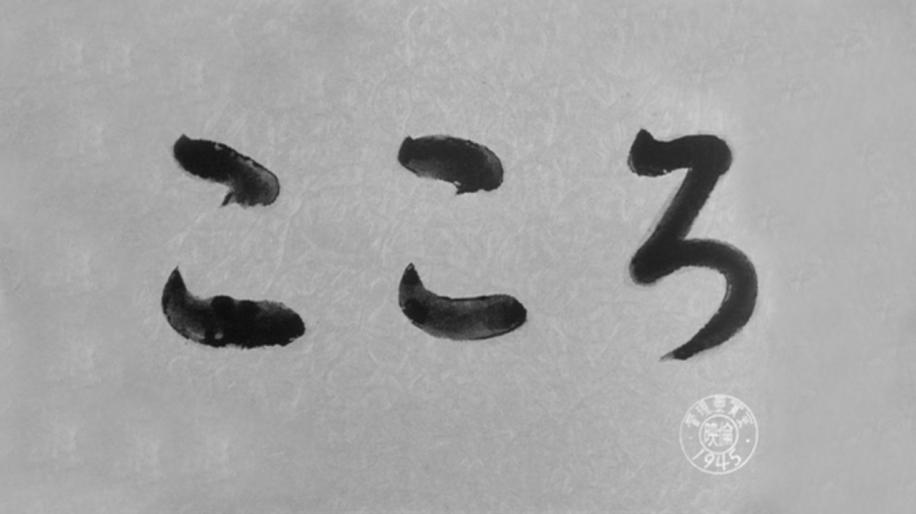 Kokoro is brought to us in its original aspect ratio of 1.37:1. I'll admit that it can be a little jarring to start with given that like many other cinema fans, I've begun to find even 1.85:1 to be lacking width, but it is soon forgotten. I wouldn't expect any film to be artificially stretched or vertically cropped and as such, we are presented with the image as it should be.

It is clear from the outset that the touted “New high definition digital transfer” of this film has not been in vain. Similarly aged Japanese fare can be excessively noisy and sometimes look as though they've been kept in a barn for decades and transferred to disc by way of a camcorder in a cinema. Here, the image has been cleaned with precision, eradicating most of the specks and hairs without overstepping into the realms of removing detail or the feel of a vintage film.

Obviously, being a black and white film, discussion of colour is meaningless, but the contrast isn't the strongest between the two extremes, with everything falling closer to grey. What is less than meaningless is the depth found in this monochrome picture. The shadow detail draws the eye further into the field than many un-restored offerings, which instead find themselves more two dimensional due to the ever present dirt pulling the focus of the viewer back to the screen/lens itself. This is a solid offering that ranks as one of the better treated Japanese films of the era to be released on DVD. As with Alone Across the Pacific, the monaural mix was only ever going to be cleaned in order to remove hiss and crackle from the track. This is a largely silent offering and as such there isn't a great deal to comment on with regards sonics. Predictably, the soundstage is flat and performs from the front speakers. As with my reviews of other foreign films, my lack of knowledge of any other language than English precludes me from a complete critique of the dialogue reproduction. What I can say is that, to my layman's ear, voices are clear and well rounded for the type of track this is, though due to the tense nature of the film they are often hushed in tone. This is realistically all we could hope for - clean, not distracting and in good synchronicity with the story the picture is telling. Hardly ground breaking but considering some of the truly dire tracks that accompany similarly aged niche titles this is a plus point. Double the size of the pamphlet that came with the DVD release of Alone Across the Pacific, this is packed with useful writings that will aid the viewer's enjoyment of the film. The usual archival stills are present as well as an essay by Tony Rayns (curator and critic of East Asian cinema) that puts my meagre review in the shade and an interview with Kon Ichikawa himself split into several topics. Certainly an interesting read that will benefit any with an inclination to delve further into the themes of the film or the works of Ichikawa. I'm hesitant to appear over enthusiastic with another Masters of Cinema DVD but to be honest it is hard to remain so. Given that it is easier to find a home format release of decapitations and death scenes than it is to find such offerings from the likes of Ichkawa has long been a personal bugbear of mine. To not only see such films coming to a home format, but also in such a manner as they are, is infinitely pleasing to me. They have had care lavished upon them and clearly the minds behind these releases aren't simply involved in order to make money, but rather to get out as many significant pieces as possible, to be viewed, so that they won't disappear from the collective consciousness.

This is by no means an easy film to watch and as such I can't recommend it to everyone as I could with Alone Across the Pacific, but nonetheless it proved to be a rewarding experience. For those who have not scratched the surface of black and white Japanese cinema beyond that of Kurosawa, Ozu or Suzuki, this is an ideal starting place for further inspection. When viewed in conjunction with the aforementioned Ichikawa release, it gives a wonderful insight into the spectrum of work produced by another master film-maker.

Extras are minor but remain a perfect accompaniment to the disc, which presents the film about as well as one could expect.