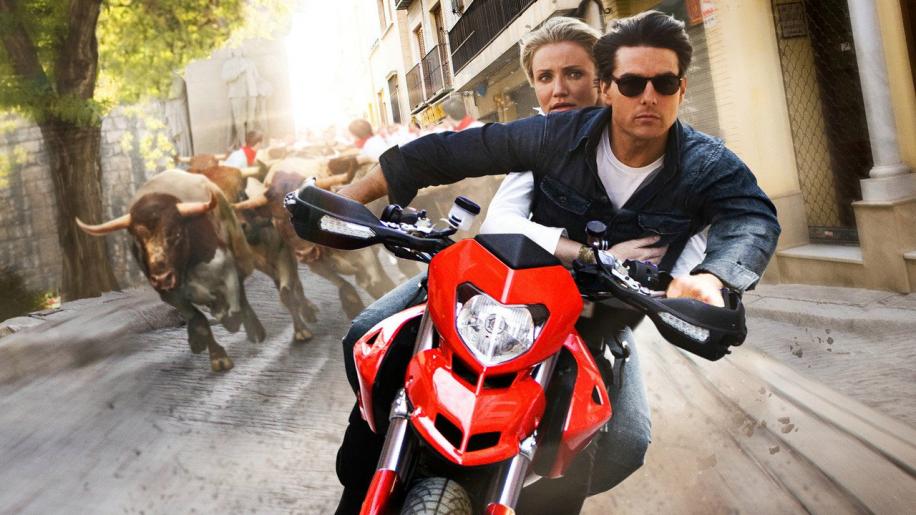 Almost all actors go through different stages in their careers, and where the likes of DeNiro was once one of the most reliably powerful performers around, his golden era in film history has largely been and gone, and the mantle since passed to a succession of other top names, of varying talents, who have all had their own decent run – whether it be for just a few movies, or a dozen in a row; whether it lasts a few years or two decades. Denzel Washington has become quite a reliable name, even if only in providing consistently entertaining thrillers, and, in my mind, Leonardo DiCaprio has become the best and currently most reliable great actor.

For quite some time, however, Tom Cruise held his own at the top. Perhaps he was initially only known for fairly flimsy, but very entertaining actioners, he soon evolved, proving himself to be a very real contender. The spark was shown way back when, in Born on the Fourth of July; hinted at in A Few Good Men and The Firm; and then became more and more apparent in almost every single movie he made. He did a run, from 1992’s A Few Good Men through to 2006’s Mission Impossible: 3, where I saw all but one of his movies in the cinema. Whether it was the frivolous guilty pleasure that was M:i-2, or his surprisingly good bad-guy role in Collateral, or his fantastic performance in the quality Last Samurai, I saw them all. His name was enough to get me to the cinema, almost like Washington or DiCaprio now. These days it’s impossible to say his name without evoking images of couch-jumping or weird Scientology practices (you know, that cult which believes we were all spawned from aliens), but I still like to think of the guy as a good actor. For some reason, however, his last couple of films – in my opinion – have just failed to hit their mark. After being disappointed with Lions of Lambs at the cinema, I waited for home video to watch Valkyrie, which was also fairly anticlimactic. So when Knight and Day was released, in a summer packed with the usual assortment of Blockbusters, I easily let it go by the way-side, despite it ostensibly having the potential to be a whole lot of fun.

June Havens is a classic car specialist, who has found the last remaining parts to help her complete the restoration of her late father’s beloved ’66 GTO and bumps into Roy, a mysterious handsome man on her flight back home. But when he reveals himself to be a spy, who is being chased for a piece of advanced technology that he’s stolen, June’s life is thrown into chaos. Finding herself similarly wanted by the authorities – and other people with guns – she is faced with a choice: does she simply attempt to return to her normal life; does she turn Roy in for the crazy man that he seems to be; or does she join him on the fantastical, dangerous mission that he says that he is on?

Well I have to say that the Theatrical Version of Knight and Day was very fluffy stuff. Barely holding your attention, it was fun, but in the lightest, most Malteser-like fashion. It attempts you to take you on quite a conventional journey, albeit mapped out in an unpredictable way; with characters you have seen before, several times, going through the twist-journey motions in proper CG-augmented stunt-style. With every increasingly expansive set-piece, and every increasingly extravagant bit of CG, the routine drifts dangerously close to being boring, the characters take far too long to become likeable and engaging, and the end results sits in the distinctly average category.

In the end, you enjoy Knight and Day mostly as an excuse for (once-)superstars Tom Cruise and Cameron Diaz to have a whole lot of fun largely being themselves (Cruise, the ambitious, charismatic stuntman; Diaz the spunky, budding auto-expert), whilst going on an eventful, Big Screen ride, that involves flipping cars flying over their heads (like in Die Hard 4), jumping across rooftops, and running away from explosions. This is actually fairly entertaining, in a vicarious fun-watching-people-have-fun kind of way. But it’s pretty unmemorable. And the whole situation isn’t helped by the fact that you’re looking at a paper-thin plot populated by two-dimensional characters.

I blame some of this on the questions left unanswered for far too long at the beginning of the movie. I’m not asking for unnecessary exposition, but little niggling things annoy from the outset – Who’s Rodney? Is Roy some kind of super-spy? And are we really supposed to believe the introduced-as-ditzy June is some kind of expert mechanic? I know that the answers eventually come, the story is developed, and the characters are rounded out; but it’s too little, too late, and by then, you almost don’t care anyway.

But it’s not all bad news. For Knight and Day comes to UK Blu-ray in a fairly different Extended Edition, which doesn’t just do the usual of adding a couple of pointless scenes, and a little violence; to encourage viewers to give it a second shot, despite not actually changing anything in the original. No, this cut is very subtle in its differences – an added line here, a different stunt take there – and the end result is a marked improvement. It’s amazing how much the little things make a difference: from a new introduction to June, which better establishes her profession; to a better introduction to Rodney, and who the hell he is; to more background into Roy’s skills and further elaboration on his mysterious motivations, particularly during the final act.

(Mild spoilers in this paragraph) And sure, we do get some added violence – you finally get to see what happens to the guy who gets his head trapped under an arm-rest; Roy defends himself against a knife for longer, hits someone in the face with a vicious elbow-blow; and twirls the seat-belt like a nunchuk for longer – as well as some extra action – there’s an extra, mostly silly, motorcycle vs. Bull sequence; and a great little moment where Roy reloads June’s guns, which should have been left in. There’s also one great stunt, where Roy jumps onto June’s car, only in the Extended Cut things do not go quite as planned. Not only is the longer version of the scene infinitely more amusing, but it also showcases one of the best stunts in the movie, that Cruise actually performs.

I’m telling you, if you haven’t yet seen this movie, it’s definitely worth checking out the Extended Cut first. You might find, as I did, that it is a much more enjoyable movie. I’m not saying that it makes this a really good film, or even one of the better ones out of a very mixed bag of Summer Blockbusters, nor is it even comparable to some of Cruise’s golden era films, but it is much better than the foolishly trimmed Theatrical Cut.

What could have saved this? Well you have to draw the obvious comparisons to both the classics in the genre – like Charade, the Cary Grant caper-thriller that was always dubbed “the Hitchcock film that Hitchcock never directed,” which has a strikingly similar core story; and more, recently, True Lies, that Cameron/Schwarzenegger film that managed to splice action, comedy, romance and thrills surprisingly well. Even the Brad Pitt / Angelina Jolie movie Mr & Mrs. Smith was pretty damn entertaining, even if it did not quite follow the same basic story. So, where did all these films go right in comparison to Knight and Day? Well, in my opinion, the others showcased better chemistry (and it’s saying something if I’m talking about Schwarzenegger and chemistry!); Diaz and Cruise have chemistry, but more like a couple of friends, who happen to be big Hollywood stars in a Blockbuster; rather than the smitten strangers they’re supposed to be. The action was also better, at least in the two modern comparisons, which relied less on (overt) effects, and more on conventional – but elaborate – stunts. These days it’s just too easy to rely on CG, and it can look so damn obvious (c.f. The A-Team), where simple moments – like Cruise actually jumping onto a moving car – stand out because they feel more authentic, and thus more dramatic. The characters were also better developed and the plot better structured – Knight and Day seems like a week’s worth of adventures all crammed into a hundred minutes. Of course, it didn’t help that there were no less than twelve different writers involved in the script. It shows. Finally, I think it could have done with a better score. True Lies had a much better, much more thematic score. Knight and Day took too long to develop any kind of theme, and the early action suffered greatly from this (they should have used variations of the bull/motorcycle chase theme much earlier on).

Knight and Day remains an above-average action-comedy-romance-spy-thriller, (the Extended Cut being significantly better), but it is still pretty damn far from perfect. It’s fun, fluffy stuff, entertaining in its portrayal of two charismatic Hollywood stars having a great time driving/running/jumping around blowing stuff up and engaging in mildly witty repartee. Cruise almost seems to be sending-up his own previous action-hero personas, whilst injecting plenty of natural charm and easy wit into the proceedings. And Diaz feels a tiny bit too old for the role, but still has the body – and smile – to back things up. I don’t know why they tamed it down and aimed it at teen audiences, when this could have been a much more classy, marginally more adult-orientated ride (even True Lies got the balance better). This so close to being Cruise’s answer to Charade; and you can see why – in the hope that it would be – he picked this role above Salt (being replaced in that movie by Angelina Jolie). I do give him credit for bringing something new to the table, rather than just offering up another straight actioner, but whilst it’s trying to be Charade-meets-True Lies, unfortunately it sometimes comes across as little more than a lightweight riff on these, and many other better movies before it.

So it’s worth watching once, at least to see if you enjoy it, and definitely worth exploring in its superior Extended Edition form, but you shouldn’t get your hopes up. It’s predominantly no-brain, effects-driven frivolity, riding mostly on star power and charisma. It’s a shame because I still think it could have been better, but nonetheless it’ll entertain you fairly well, if you’re in the right mood for this kind of mostly vapid distraction. Hell it might even grow on some people, particularly with the longer cut; just don’t expect too much.