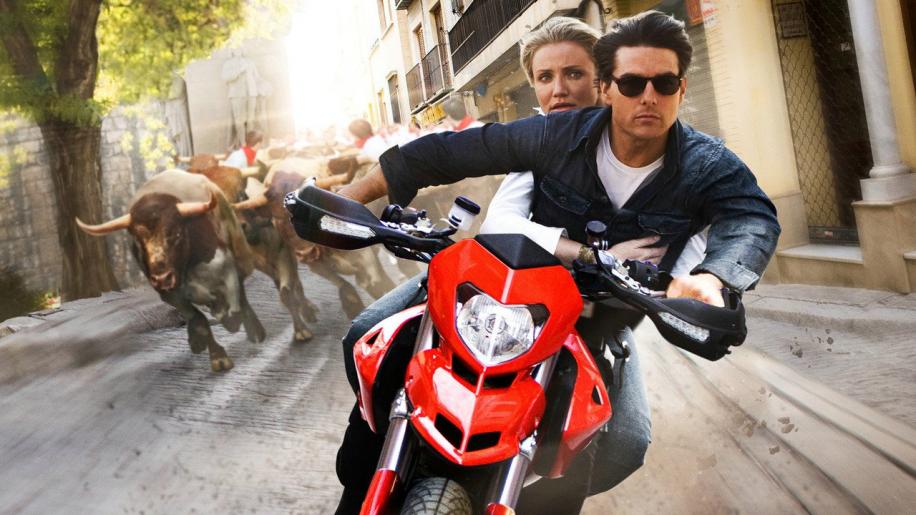 If you ever get on a flight and you notice that Tom Cruise is on board, never go to the toilet, because by the time you get back he’ll have killed all the passengers together with the pilot and co-pilot. Honestly, the man’s a maniac!

I mean to say, there’s Cameron Diaz looking pretty as a picture, minding her own business and just because she gets on the same plane as the Cruise missile she ends up being dragged all over the world and being shot at by every Tom, Juan & Helmut. That poor woman! Well, maybe not so poor really as she probably received a rather nice fee for co-starring in the 2010 Summer blockbuster ‘Knight and Day’, which has now been released on American Region A locked Blu-ray.

I recall the movie having its premiere in Leicester Square, but heard nothing of it thereafter, so I assumed it wasn’t very good. Having now had the chance to view the Blu-ray at home, I can understand why it didn’t set the world alight – although with the amount of effects explosions in the movie, it almost could have. It’s not that it’s a bad movie, if you judge it against its own objectives. It succeeds in being one big rollercoaster ride and if that’s all you’re after then you’ll be quite satisfied. Don’t go looking for a message or great script here and you won’t be disappointed. It’s a star action comedy romance vehicle for Tom Cruise and Cameron Diaz with just enough of a story to link the fast moving set pieces together, but little more. At one point I felt that it was trying to capture the same chemistry that Cary Grant and Audrey Hepburn generated in ‘Charade’, but then again that movie had a whole host of witty one liners and actors with real star quality. What we have in ‘Knight and Day’ is a couple of pretty people running around, dodging bullets and crashing cars. Despite this I enjoyed it, in a ‘chewing gum for the brain’ kind of way. It didn’t demand much of me, it’s fast paced, there are many lovely locations and we also get action scenes galore. If you miss one, never mind, there’ll be another along in a minute.

The more observant among you will have noticed that I haven’t mentioned the plot yet. Here goes - this won’t take long. Roy Miller (Cruise) is a CIA Super Agent who takes possession of a device, codenamed Zephyr, that several people want. He finds out that he’s not meant to survive his latest mission when he gets on a plane. At the airport he literally bumps into the lovely June (Diaz), who is told the flight is fully booked despite there only being a handful of passengers. Through some machinations, she ends up on the flight but things change dramatically after her trip to the Powder room, when the only other person left alive (Guess who?) crash lands the plane in a field and then drugs her. So begins the chase that leads our daffy duo on a trip that spans the globe, dodging assassins all the way. Will they survive? What is the Zephyr? Will Miller sell to the highest bidder? Is that really his name? So many questions, so few answers. You’ll need to watch the movie to find out.

As this is a Tom Cruise actioner, it’ll come as no great surprise to discover that he gets involved in hand to hand combat, takes part in a gun battle while clinging to the bonnet of a fast moving car on the Boston freeway, races Bulls in a Spanish street on a motorbike with Diaz riding pillion, runs for his life across the rooftops of Salzburg –phew, isn’t that enough? You do get the feeling however that the stars knew that it was all a bit silly and couldn’t take it seriously, but came along for the ride (and the money) anyway. Peter Sarsgaard ('An Education') pops up as a CIA agent and he too looks as if he’s having a hard time believing it.

Amid the gunfire and explosions there’s a comedy element which attempts to be of the witty/screwball variety yet it rarely raises a belly laugh. It merely succeeds in making you feel that there in no real threat to the characters as they find themselves in one potentially perilous situation after another. The pace of the movie is such that we don’t get the chance to know the people in the story before the bullets start flying, so we really don’t care about them. I felt that I might as well be watching characters in a computer game. There didn’t seem to be any ‘sexual chemistry’ between Cruise and Diaz – perhaps because there was so little time for it – no burgeoning relationship and it all seemed a bit clinical. The comedy romance aspect of the story seemed a bit thin.

The action scenes themselves were pretty impressive and wouldn’t look out of place in a Bond movie. The fight on the plane was well choreographed as Cruise’s character uses every piece of equipment available to defend himself and take out the opposition. All the same, there seemed to be no sense of urgency or threat - which detracted from the realism. From this point on, and it’s fairly early in the movie, the suspension of disbelief is blown. The CGI used on the sequence where Cruise casually lands the plane is faultless. All of the stunts (of which it is claimed that Cruise did many) look good. The problem as far as I could determine was that I’d seen it all before in other movies. While it was all very spectacular, it just wasn’t new or original. In one of the Bonus featurettes, Cruise tells us that there was one particular stunt he’d been working on to put in a movie involving a motorbike, where the girl passenger changes position to be in front of the ‘driver’ and fires guns at the pursuers. Was this same stunt not in ‘Tomorrow Never Dies’ years ago? Maybe if a star becomes so big, other people are afraid to tell them that it’s been done before.

Overall, ‘Knight and Day’ entertains on a superficial level. It’s also very honest in that it doesn’t pretend to offer anything more, so there’s no mis-selling here. If an action packed theme park ride is all you want then this is the movie for you. It’s certainly better than most of the ‘entertainment’ currently on TV, but call me old fashioned, I felt it was unsatisfying as it didn’t deliver a full package that included good scripting and involving characters. You get the feeling that the movie was green lit on the strength of the names attached to it. With Cruise and Diaz to put bums on seats, who needs a script? Postcards please, to 20th Century Fox, Hollywood, USA.