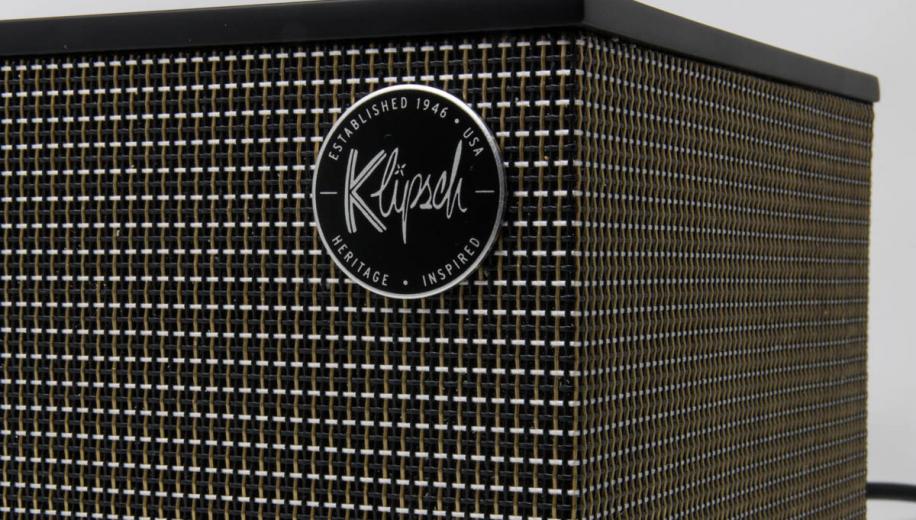 What is the Three II?

The Klipsch The Three II is a self-contained powered speaker that is the larger of two new models that bolster the lifestyle credentials of the Klipsch brand. Even a cursory look at the design of the Three II should be enough to demonstrate that Klipsch has taken a slightly different approach to building a product of this nature than - for example - Harman Kardon has with their recently released Citation 500.

Dig a little and it becomes clear that the differences go beyond the aesthetics too. The whole powered speaker category is not so mature as to preclude some significant differences in the specification that they should be equipped with to get this job done. This means that the Klipsch forgoes Chromecast and other wireless cleverness in favour of Bluetooth and more direct connectivity - some of it as we shall see, no less distinctive than the speaker itself.

This means that the Three II might be either exactly what you are looking for or a complete non starter but it’s worth digging a little deeper into whether the specification of the Klipsch has the scope to make it a bit of a bargain. Certainly, at under £500 and boasting a power output and driver compliment that isn’t significantly different from more expensive rivals and, with a few little additions, the Klipsch might be a savvy answer as a strong all round performer that also just happens to have a retro streak a mile wide. Let’s see how we get on. The Klipsch is a single chassis powered speaker. The cabinet is a sealed box design and makes use of a pair of 2.25-inch ‘full range’ drivers that are augmented by a single 5.25-inch sub with another pair of 5.25-inch passive radiators acting to augment the performance. They must be doing something right because not only does Klipsch claim a low end frequency response of no less than 45Hz - and this is at a claimed +/ 3dB (i.e. the more rigorous of the two measurement settings generally allowed for this) - which suggests that there shouldn’t be any shortage of low end shove. Power is given as 60 watts continuous at fairly acceptable distortion levels.

One thing that isn’t present in the Three II, which makes it fairly unusual as a Klipsch product, is any form of horn loading. This isn’t too much of a surprise in that fitting a horn loaded assembly to a cabinet this size is going to eat a great deal of the relatively limited amount of space available and given that there are no dedicated tweeters in there, the horn would have to adopt full range characteristics. Again, this isn’t impossible since the resulting product would be a great deal larger and more complex than the speaker actually is.

Where the Klipsch differs from many rivals is the features and inputs it is supplied with. Klipsch makes a voice assistant speaker in the form of the visually very similar The Three Google Assistant (no prizes for guessing which of the voice control protocols it supports) but the Three II does without any form of network capability at all. This means there is no UPnP, AirPlay or Chromecast but, equally, you do get some inputs that I’ve been bemoaning the absence of on other products recently. Before we discuss those, you do of course get Bluetooth. In this case, it’s a v4.0 implementation with aptX but no AAC as best I can discern.

This is joined by a pair of analogue inputs. The first is on a 3.5mm stereo connection while the second is on an RCA input. This latter connection swerves firmly into leftfield territory. As well as being able to accept a standard line level input, it can be switched to become a moving magnet phono stage. While it might sound like this is just the sort of thing I’d be deliriously happy to see… I’m actually not that sure about it. Most of the turntables that are likely to be connected directly to the Klipsch will have a phono stage in already but it does at least serve to differentiate the Klipsch from almost everything else. The final connection is a 24/192kHz capable USB input. While not quite as ‘out there’ as the phono stage, this is still a slightly unusual fitment to find on a speaker like this. There is a degree of sense though. As a desktop device to sit with a workstation, the Klipsch has an advantage over pretty much any more conventionally outfitted rival. There are some limitations though. There is no form of digital input in the manner of the R41 PM (or the soundbars) which precludes easy use with a TV but, given the number of other options from Klipsch, this isn’t too surprising. What might be more of a nuisance though is the absence of a USB to charge a phone or tablet (or indeed, power some possible source components). There is a USB socket for service purposes which seems to have power but it really doesn’t want to be used for this task.

We must now delay no further and turn to the aesthetic of the Three II. Let me state from the outset that the Klipsch is not going to appeal to everybody. If you own of these sleek, modern edifices that Kevin McCloud wanders around eulogising about how the owner “has used light as a texture”, this is not the product for you. In a world of curves, recessed controls and soft touch plastics, the Three II sits like a plate of kidneys at a vegan food festival.

The thing is, like the truly lovely Tannoy Legacy Eaton, I think that they just about get away with it because Klipsch hasn’t simply rifled through some clichéd bits of ‘old’ design. If you took the Three II back to the sixties in whatever cinematic time travel device you fancied, you could show it to someone and they’d recognise it to be a Klipsch product. It takes recognised strings of Klipsch design and riffs with them to make a product that works nicely as a finished entity. This is helped by it being simple to use thanks to simple input and volume selection and other controls being logically marked. You also get an entirely non retro but easy to use remote control that bypasses the lack of app control.

No less importantly, the Klipsch feels old school solid too. It might be fair to say that the artisans of Rolls Royce will not be beating a path to Arkansas to substitute their dashboards for the ‘wood’ in use here but the Three II is a fun product to interact with and it feels like it will still be strutting its stuff at the point where it genuinely is old rather than just looking old. It also has the advantage of not being dependent on a single piece of software or operating system that risks it being rendered obsolete at a stroke. How was the Klipsch tested?

The Klipsch was connected to an IsoTek Evo3 Corvus mains block and connected to an Essential PH-1 and Sony Xperia XA2 smartphone for Bluetooth testing. The USB input was tested via SOtM SMS-200 Neo and the line input via a Google Chromecast Audio. When this was switched over to MM phono, a Michell Gyrodec running a Goldring 2500 cartridge was used for testing. Material used has included FLAC, AIFF and ALAC, TIDAL and Deezer and a small amount of vinyl. Straight out of the block, it should be made very clear that the Klipsch does not sound old. If you are hoping for a presentation chock full of midrange emphasis but decidedly anaemic at the frequency extremes, you’ll have to go elsewhere. In fact, it has to be said, the Klipsch is a bit of a star. At least it was once I stopped trying to use the Essential. For reasons unknown, the Klipsch and the Essential got along like two cats in a sack. It proved almost impossible to achieve stable drop-out free playback with either TIDAL or Deezer and the results were entirely unsatisfying. The Essential had very recently upgraded to Android 10 though and was exhibiting some other curious traits, so I am inclined to point the finger of blame at that.

Certainly, once I had swapped to the Sony, the Klipsch was utterly stable and a very good listen indeed. For a sealed cabinet with some fairly sensibly sized drivers, the Klipsch has excellent bass. It has the sort of depth that allows for even large scale and visceral music to have a bit of punch to it. What is most impressive about this is that there’s very little sense of there being a bass driver (singular) at work, let alone passive radiators. Sit and listen to the Three II and it really sounds like two drivers and two drivers only. All the way from that bass response and up, it feels cohesive and controlled. It doesn’t feel hugely stereo but then, neither do its key competitors. Listening to Tool’s Fear Innoculum on TIDAL (everyone else was so I felt compelled to join in), the Klipsch is a reminder of how good Bluetooth can be. If you have access to a Chromecast Audio though, the Klipsch is even better. Spend a little time listening this way and it becomes clear that the Three II has made what might look like a weakness into a potential strength. The fact you can attach any of the voice assistant products to it rather than having to go with an inbuilt option is something that renders it rather flexible. It would be wonderful if it could power those units too but it’s clever nonetheless. The USB input is also effective. I’m not completely sure how many people will use it but it delivers on the promise of being able to send Hi-Res audio to the Three II. If you are looking for an intriguingly different computer speaker, it makes the Klipsch a fine choice although I’m still tempted to say that an optical connection might have seen more use.

In much the same spirit, the phono stage is also reasonably good. It seems behaviourally very similar to the one in the R41 PM (a product to which adding a phono stage does make a little more sense) and it is sufficiently quiet and transparent in operation that it conveys some of the character of the connected turntable. I’m still not completely convinced I see the point of it but it does work pretty well and if you have a spare turntable with no phono stage lying around you want to use in this sort of context, the Klipsch is part of a pretty short shortlist of choices. The Klipsch the Three II is an odd product but it’s an odd product that makes more sense the more time you spend with it. The specification looks odd in comparison to many rivals but it leaves you the flexibility to choose the wiretap… sorry ‘voice assistant’ of your choice or simply take advantage of the hoard of unsold Chromecast Audios on eBay and use one of those. It partners a deceptively effective selection of inputs with a level of performance that is within punching distance of the Bluesound Pulse 2i which is over £250 more. The aesthetics won’t please everyone but they’ve been done with a sufficient lightness of touch and general quality that I think it will please more people than it repels. This is not a true ‘everyman’ product but it is an extremely good one nevertheless and for this reason, the Klipsch comes Highly Recommended.