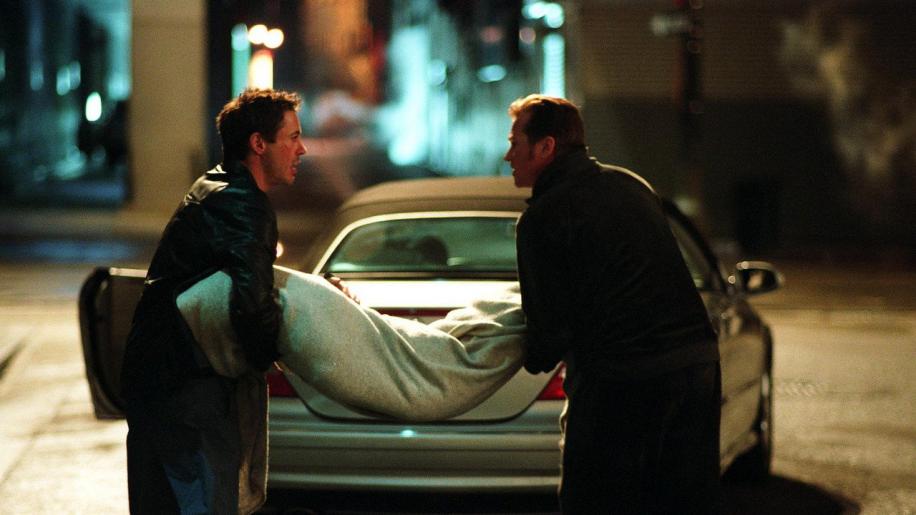 Every once in a while a screenwriter comes along whose work is simply compelling, who is hassled by all the producers in Hollywood to put pen to paper and generate yet more magic. The pressure must be overwhelming, as it obviously was for Shane Black. He is the man behind the original Lethal Weapon movie (and he also penned the story for the solid first sequel) and after its success, he just went from strength to strength. The Last Boy Scout is a severely underrated buddy-buddy action vehicle - one of Bruce Willis' early great works - and compounded the proof that Shane Black was a master screenplay writer. However, it was the Samuel L. Jackson-starring Long Kiss Goodnight that sealed his fate as a goldmine and at that point everything fell apart. With the pressure too great, Shane Black abandoned Hollywood for some ten years, taking his time to come up with his next work - despite the fact that everybody was knocking at his door, wondering when it would be ready. Well, here it is - Kiss Kiss Bang Bang - a highly anticipated new thriller that Black also decided to make his directorial debut on. So, is it any good?

Harry Lockhart has struck it lucky. A petty thief, he haplessly stumbles upon the opportunity to go to Hollywood and strike it big, but soon gets a lot more than he ever expected. Sex, murder, mystery - it all starts with the chance meeting of a childhood sweetheart, Harmony. That's when everything begins to fall apart. Harry soon finds himself hip deep in dead bodies, framed for murder, chased by assassins and embroiled in a conspiracy that he does not have a hope of figuring his way out of. With the help of an experienced P.I., Perry, he tries his best to keep his head above water but it becomes apparent that the only real way out of this mess is by confronting the bad guys and finally proving his worth.

Echoing the works of the great Raymond Chandler, Shane Black has constructed a fantastic new film-noir thriller, rich with his trademark style, wit and panache. I mean, the script is simply brimming with classic one-liners that fans are likely to be quoting for quite some time. Beyond this - which is what we have come to expect from Black - we also get a well-crafted, well-shot (particularly for his first time as director) action-thriller that is shamelessly convoluted but consistently entertaining. Aside from the script, the main reason why this work is so compelling is that Black knows how to give the audience characters that they will truly care about.

Of course it helps no end that the cast are so well-chosen. Once again, Shane Black has worked his magic and found us heroes and villains in the least likely place. Just like The Long Kiss Goodnight, where he turned Geena Davis into a gun-toting assassin and Samuel L. Jackson into a wise-cracking dishevelled gumshoe P.I., he has really kick-started Robert Downey Jr's career comeback (and about time, as he is severely underrated) by placing him in the driving seat of this vehicle. Seemingly perfect for the role, Downey Jr is totally at ease as the self-deprecating, hapless crook who simply stumbles upon his own purpose in life, going from zero to hero by the least likely root you would have thought possible and always ready with a quip to diffuse the danger of the situations he is in. Narrating the whole affair (again in a very Chandler-esque way), Downey Jr's Harry Lockhart is a great central character, breathing new life into the whole concept of a movie hero.

His support is largely two-fold: firstly we get Val Kilmer as his Private Investigator 'mentor,' also always ready with a sharply cutting but witty word of advice for his student and generally much more in control of the situations he is in. Kilmer is another underrated actor, who has more success with his less well-known movies than with his blockbuster roles. For every The Saint and Batman Forever, he has redeemed himself tenfold with quiet works like The Salton Sea or the superior David Mamet thriller Spartan. I certainly wish upon him more roles like these and he provides solid support for Downey Jr's hero. Then there's the lovely Michelle Monaghan (who is soon to be seen starring opposite Cruise in the upcoming M:I-3), dependably underdressed as Harry's childhood sweetheart, the tough and sexy heroine, Harmony.

Kiss Kiss Bang Bang is a superior directorial debut from Shane Black, packed with action, intrigue, unusual characters and his trademark one-liners. Almost single-handedly fuelling Robert Downey Jr's comeback, Black has confirmed once again that he is an entity well worth banking on and I can only hope that we don't have to wait another ten years for his next work.