Kirby reveals he has a new dimension 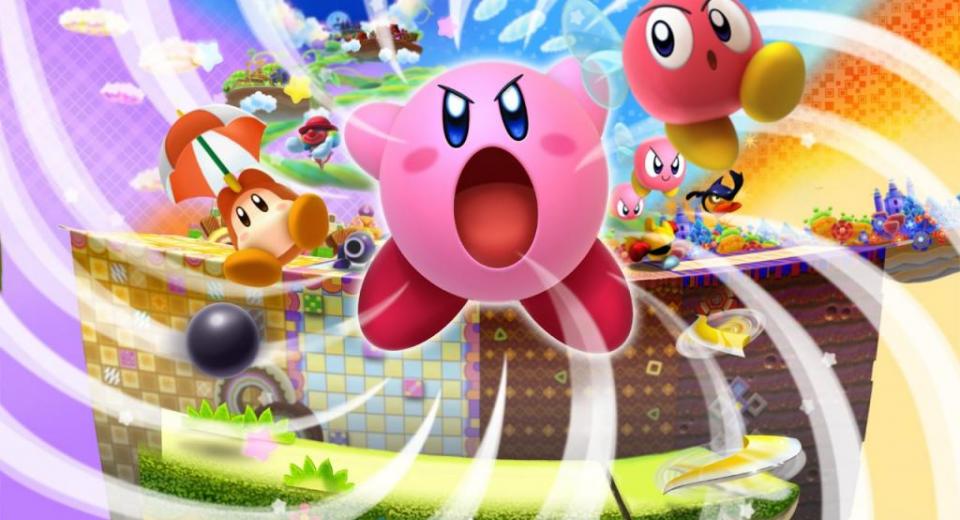 First you draw a circle

You never know what you’re going to get with Kirby. The poor, pink puffball languishes down Nintendo’s mascot roster, trailing way behind the likes of tie-wearing simians and iconic handymen. Whilst this may mean he does not get the recognition he deserves it at least allows him a certain freedom. Donkey Kong and Mario have been too successful doing what they do for too long and apart from the odd bongo session or sports outing they will continue doing what they do ad infinitum. Kirby, thank goodness, doesn’t suffer from that. This is a blob who has been spun out of wool, was seen multiplying at a rate that would embarrass Tribbles, and has been previously used as a golf ball. You can say many things about him but typecast is not one of them.

His roots have always been in platforming, however, and when he returns to them he is a very different prospect to his stable mates. Mario, no matter what guise he may be donning, is a by-word for platforming excellence, a lesson in level design and nuanced controls. Mr Kong operates on a far more primal level, acting as a force of nature barrelling through levels whilst occasionally riding a rhino. Kirby, by comparison, sits far from both. He offers neither the precision platforming of Mario nor the raw power of Donkey Kong, inhabiting a strange world where a character that can fly is asked to platform. It’s not unsurprising then that Kirby survives far more by charisma and tricks than he does on a simple ability to leap between ledges. A large proportion of this has always been offering you a choice of how you want him to act. Our round protagonist never really faces danger as he can simply turn around and inhale his attacker - it’s quite a leveller. Suck in a ninja and he can copy their abilities and dish out a flurry of throwing stars, digest a wheelie and he can transform into an unstoppable tyre and roll right over his problems. Its heart has never been about skilfully navigating a level but the joy you have from transforming him into the Kirby of your choice.

There is something undeniably adorable about the new bell-ringer Kirby. With a giant bell on his head and one in each hand he stands there swinging merrily as though accompanying a group of violent carol singers, happily knocking out a tune whilst simultaneously knocking out his assailants. It’s bizarre to see such an innocuous pastime turned into a form of combat. Elsewhere circus Kirby dives through summoned hoops of fire and creates huge balloon animals, whilst beetle Kirby dresses up like a solemn, samurai stag beetle and runs around brow furrowed and head down. I could go on but for your sake I won’t. Every Kirby has such a unique set of quirks and animations that will cause you to absorb new enemies hoping that they’ll bring with them a fresh set of abilities to the ever-hungry hero.

Then you dot the eyes

There are a great many of foes to inhale, too. As you trek through (or rather above) Dreamland they come from levels inspired by all manner of themes from ancient Egypt to snowy poles. Though that’s the joy of living somewhere called Dreamland, I guess. The first, however, is rather traditional and plain, acting as a taster for Triple Deluxe and showcasing each new novelty HAL have stuck into this latest iteration.

The first is Kirby’s nod to 3D which predictably sees Bronto Burts and Waddle Dees swinging cutely in and out of the screen. Though initially trite its use is more than just a gimmick; giant snow balls crash into the foreground and trains hurtle from deep tunnels forcing you to pay as much attention to what’s behind you as what’s in front. Where it’s taken particularly seriously is with each boss fight and offers the best justification of the extra dimension since Super Mario 3D Land. You’ll face evil painters who’ll paint the screen and canvas monsters whose depth belies their threat, both of whom could easily operate on just a flat screen but are both enhanced by the sensation of distance. Jumping in and out of a snake’s curves as it slithers back and forth across the depth of the battlefield was incredibly satisfying and one of the few times I’ve felt a scene has definitely been enhanced by the 3D. All are still eminently playable on a 2DS but in paying attention to the potential of the extra dimension they offer a twist to Kirby’s traditional single-screen boss fight. This depth is also used in normal levels to add an extra route tucked away in the middle distance. Frequent stars allow Kirby to nip back and forth and the concept is used well to hide secrets and scatter threats. For once Kirby can’t just inhale the danger and so this alone adds moments of danger to your journey as you’re bombarded from the background. Throughout there’s a real sense that the designers set out with Triple Deluxe to utilise the depth as much as possible and there are so many little touches both visually and mechanically that show this off to great effect.

The other addition to the series is the Miracle Fruit, found only upon the giant beanstalk you are scaling. When consumed this glowing delicacy grants Kirby suction so great that it would put most black holes to shame. Now whole forests, houses, and mini-bosses are caught up and digested in a violent tornado as Kirby marches indomitably across the land. It introduces a real sense of power, a freeing experience where you can trample through the rest of the level knowing nothing can stand in your way. What is also does is opens up a series of predicaments that only the convenient use of massive amount of suction can solve. From setting wrecking balls in motion to pulling eels out of pipes, it’s terrifying the things this hero will happily pop in his mouth. Most of these are set-pieces and with that comes the opportunity for HAL to once again show off the loving touches they put into every corner of a Kirby game. Try and inhale a group of Waddle Dees and they’ll cling to each other, desperately trying to resist the inevitable truth. Or against a menacing tank it will find itself stripped layer by layer until there’s nothing but a dismal looking chassis left.

Such little touches are reason enough to return to each level but there are other incentives. Throughout the game sun stones and collectible key chains celebrating Kirby’s back catalogue are hidden away. Either locked in areas only accessible through use of specific copy abilities or tucked behind a puzzle they are both good reasons to go back in and explore.

Even when you’ve completed the adventure there’s still more to drain your time as sitting alongside is also Kirby Fighters and Dedede’s Drum Dash. The latter is a rather basic rhythm game that tires quickly as you bounce the penguin king off a series of drums collecting stars as you go. The former, however, appears to be a warm up for Kirby’s next appearance in Smash Bros. It’s an arena fighter featuring nothing but coloured Kirbys, each of whom have a different power. Compared to the rather basic combat or boss battles of the main game it has a very different feel but one that’s not unpleasant. With four friends – thanks to download play none of which have to own the main game itself – then it’s a fun blast as you finally prove that campanology Kirby is indeed the best of the Kirbys. Whilst Kirby can never stand to compete against the other Nintendo names on pure platforming, the lashings of style and variety he brings more than make up for the lack of pixel perfect jumps or nuanced controls. He is the mascot that doesn’t care about showing off athleticism. This chap just wants to be a good host and ensure there’s always something new for you to try.

With Triple Deluxe he once again delivers. Though not quite the off-the-wall deviations we’ve seen in Paintbrush and Air Ride, he brings subtle but welcome changes to the game where he first came to prominence. The Miracle Fruit gives him a new found power and playfulness whilst the benefits of bosses and levels having extra depth are well judged. They may have come too late to save the 3D but they definitely buoy the flagging tech.

To some Kirby will forever be the poor cousin of greater Nintendo platformers but with every level and boss he tries to offer something new, something different. If you’re looking for a straight platformer then this isn’t for you but if you’re looking for variety and character then you could do far worse than snuggle up with this pink sphere for a few hours.