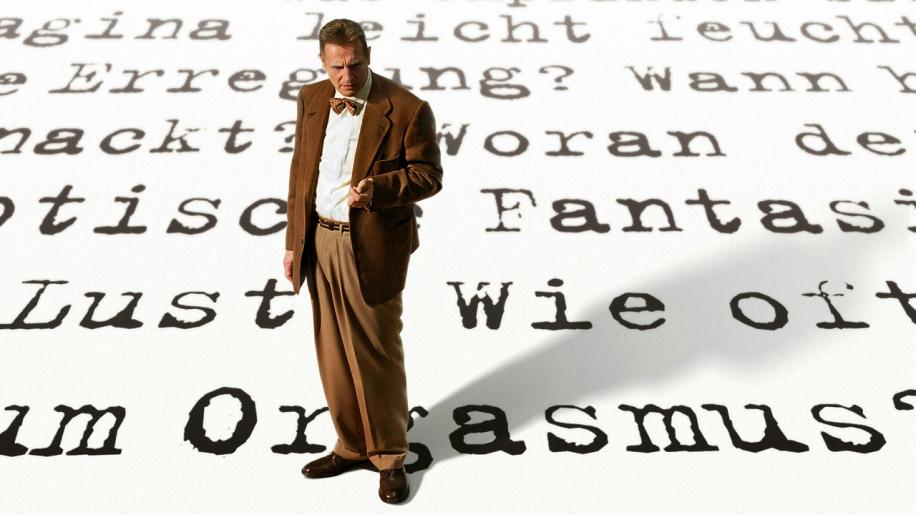 What is love? The simple answer, facetious as it might be, is love is a word. Slightly more complex and analytical answer would be love is a chemical reaction within the human animal promoted for attraction. Why? So that when a male and female mate, their shared 'love' represents a bond to hold the unit together providing a stable base for the bringing of new life and continuing success of that life into adulthood, thus assuring its survival and therefore the species continuation. Kinsey in his research and for the majority of this film ignores this simple fact, reducing the sex act to either mere copulation or an enjoyable act with many variations. Further to this revelation, a sex act, enjoyable or otherwise, should be experienced, nothing should be taboo, because as an act, sex is biology and biology should not be sanctioned by laws or governed by the State. In this sense, Kinsey should be applauded for his liberal views and challenging of the State, but in his drive for science the necessity of Love is forgotten, at least until the waning years of his life.

Professor Albert Kinsey (Liam Neeson) was born into a tyrannical family with a devout father (John Lithgow) that terrorised the household. Once he was of age he moved to Indianapolis University to study Gall wasps, collecting some two million specimens. After his marriage to Clara (Laura Linney), and their first abortive attempt at sex, they decided to seek help. Kinsey was amazed by the lack of knowledge and took it upon himself to learn and instruct those that need it. During this time he formulated the idea to study the sex act by direct contact, interviews with people rather than relying of data collected on forms. This pioneering method resulted in hundreds of thousands of interviews and enough raw data to produce his first book Sexual Behaviour in the Human Male in 1948, it was a huge success. However, when he came to research his second book Sexual Behavior in the Human Female, the Second World War had come and gone, a new air of cynicism was around and the beginning of the cold war was ever prominent and although published in 1953, it was to a much more sinister audience. Later in life his researches into practices in criminals is largely ignored in the film, and this is where most of the controversy about the character lies. Towards the end of his life, after battling the moral minority he, according to the film, comes to terms with love and its affects towards the person he loves most, his wife.

Biopic films are a strange breed of film, often relying on 'artistic licence' to promulgate drama, since everyday live is rather mundane. Director Condon recognising this likes to take a specific moment in time in a person's life and tell that small part (Gods and Monsters) but Kinsey's life was such an 'adventure' that approach was not possible, opting instead to tell a short life story but concentrating on the aspect of his fame; his deconstruction of the sex act. Of course there are the moments of licence, the funeral of his mother for one (his father would never have been there) and it is of course these moments that make for the best drama, Lithgow and Neeson giving outstanding performances. In fact all the performances are remarkable gaining the film numerous awards for best actor and supporting actors/actresses. It is in no small part these performances that lift this film to the high drama it is. I'm sure too that the subject matter and subsequent press also helped. During his time Kinsey interviewed all sorts; one incident documented in the film of a paedophile telling his revolting story was one that caused particular concern; not least because of the decision taken not to show any consequence. An odd choice considering that a scene was filmed, and is included in the deleted section, that covers the very ground needed to debunk many of the accusations levied. I personally have no beef with anything covered and do in fact applaud the strides Kinsey made both to science, our understanding and tolerance. Yet I didn't particularly enjoy the film, nothing about it made me want to sit up and listen and perhaps this is its biggest flaw; subject, scrip and characters are all fine, but to me it is missing the X factor needed to make a film stand out.

As a final note, I find it deliciously ironic that the very morality Kinsey was fighting against to publish his books is the very same that was used to classify this film Restricted in its native land, highlighting just how much things have changed, just how much has stayed the same.