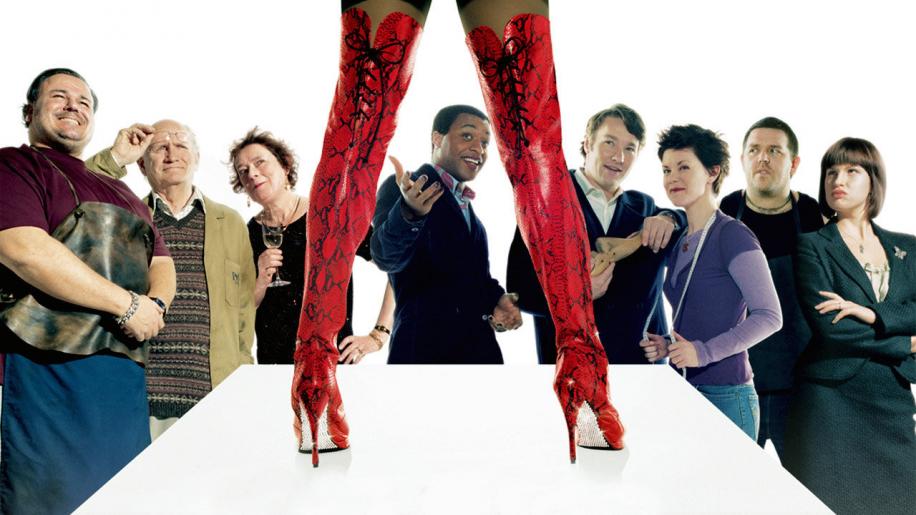 Charlie Price was brought up to love shoes. His dad was a cobbler, introducing Charlie to every single aspect of the manufacturing process within their Northampton-based shoe warehouse. By the time Charlie is old enough to make his own decisions, he no longer wants anything to do with his dad's business and chooses to move away from Northamptonshire with his fiancée, Lauren. However, before they can even get settled, a phone-call brings bad tidings and Charlie finds himself the new owner of Price Shoes. He tries his best to adapt to the new role but the work-staff do not particularly like him or his new ways. It does not help that some big losses hidden in the books by his father (from cancelled order) force him to make over a dozen redundancies. Worse still, unless he can find a way to reinvigorate the dying business, he is going to end up losing it all. Then he meets Lola, a lively drag queen who has her own song-and-dance show in Soho. Lola needs new boots: high-heeled, thigh-high boots capable of supporting the weight of a man. It is just what Charlie needs as well - an untapped new niche market - but can he and his employees overcome their preconceptions and prejudices to save their dying business?

Kinky Boots is, transvestites aside, a fairly predictable little comedy drama. Still, it is nonetheless warm and enjoyable, with a well-paced, well-developed plot and slightly richer characters than you would normally expect from this kind of affair. Joel Edgerton takes the lead as Charlie Price. You might recognise him from the Star Wars prequels or, on the small screen, in the Australian soap-drama The Secret Life of Us. Nothing I have seen from him has, in my opinion, qualified him to take centre-stage in a production and this is certainly no exception, but acting opposite some decent talent does give him a better shot at showing his mettle. The decent talent comes in the form of Chiwetel Ejiofor, who previously brought us a whole new dimension of bad guy in the excellent Firefly spin-off, Serenity. Here he's also pretty good in the very different role of Lola, playing the drag queen as both strong and vulnerable, and never drifting too far into cliché and stereotype in his performance.

Backing them up we have the ever-excellent Nick Frost (who is most often seen opposite Simon Pegg in hilarious productions like Shaun of the Dead and Spaced) as one of Price Shoes' most prejudiced workers, Jemima Rooper (from the TV shows As If, Hex and Sugar Rush) as Charlie's two-dimensional fiancée (one of the shamefully clichéd characters that every drama of this sort requires) and Sarah-Jane Potts (also from the TV show Sugar Rush) as the one worker who believes in Charlie's dream. To round out the cast we have Robert Pugh (Master and Commander, Prime Suspect) in a cameo as Charlie's dad and Linda Bassett (The Hours, Calendar Girls) as another one of the seasoned workers. It's a decent enough cast for this sort of affair and they all bring something to their roles.

All in all Kinky Boots is not particularly original but nonetheless perfectly watchable. The drag queen side of things is presented in a warm, charming manner, making it infinitely more accessible and, apart from a few too many moments where they drop into song, it does not drift too far into farcical campness. The cast do well with the material they have and this is the kind of thing that you will probably quite enjoy on TV sometime. If you like the sound of it, the theme it follows or this kind of movie (or the people involved) then it might be worth adding to your collection, otherwise give it a rental first to see if you like it.