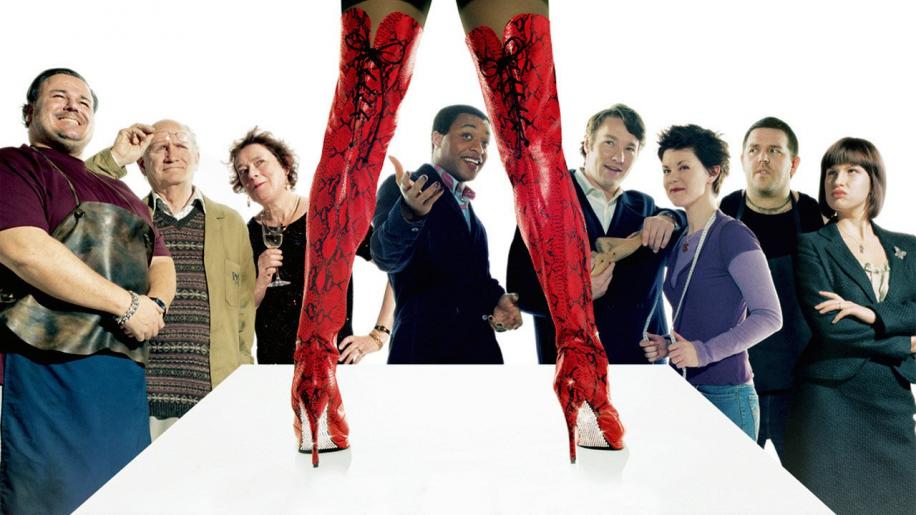 Kinky Boots is presented in a decent 2.35:1 aspect ratio anamorphically enhanced widescreen transfer. The detail is very good indeed, with clarity throughout, no noticeable softness and negligible edge enhancement. There are no signs of digital artefacting. The colour scheme is quite broad - even with the Northampton settings - with a nice palette that includes rich, vibrant reds and solid blacks, allowing for decent shadowing.

To accompany the movie, we get a solid Dolby Digital 5.1 effort. Dialogue is presented clearly, predominantly coming from the frontal array. There are no significant effects to speak of (other than the atmospheric noises like stilettos clicking or factory machines whirring) but the score and, more importantly, the soundtrack really makes up for the otherwise average part of this mix. The songs (both performed and backing) bring the track to life and really get you into the mood of this movie.

First up we get an Audio Commentary by the Director Julian Jarrold and the three lead cast members: Joel Edgerton, Chiwetel Ejiofor and Sarah-Jane Potts. Considering how decent the performances were, it is slightly surprising that the three actors take a distinct back-seat and almost sleep-walk their way through the proceedings, with Jarrold taking charge and not even being that interesting himself.

The Real Kinky Boots Factory Featurette runs at fourteen minutes in length and is also a little lacklustre. It mainly focuses on the real-life factory owner Steve Pateman, and his experiences which were depicted in the movie. It should be quite interesting but rarely raises itself beyond more promotional fluff.

We get four Deleted Scenes, with optional Commentary by the Director Julian Jarrold, who explains that they were largely removed because they were superfluous. I concur, but it's still nice to see them here and they're worth a once-over.

The Journey Of A Brogue Featurette is ridiculously short - little over sixty seconds in length - basically expanding on the opening sequence and showing you how these shoes are made. Slightly gimmicky.

Overall Kinky Boots is a watchable but predictable little true tale, with quirky, interesting characters, a reasonable comedy-drama-romance story and some nice moments. It's nothing to write home about, but will appeal to fans of this particular type of movie. The technical details are decent but the extras are a bit disappointing, although at least they made an effort to put something on the disc. For those who like small-scale British efforts like this, it's definitely worth at least a rental.